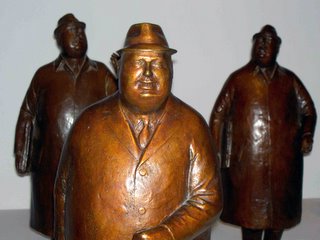 Went to the Burlington Art Centre to see an exhibit and lecture of William McElchern's Businessman sculptures. A delightful selection of statues had been assembled, dating back from 1970 through 1997. The statues showed the business man in a range of positions, usually in motion and ranged from small desktop versions to life-size ones. It was interesting to see that some of the statutes were significantly less portly than others. At first I thought that the statues grew fatter as the years past, perhaps mirroring the artist or his model, but this was not the case. Some of the later pieces of work were skinnier than the older ones, so I guess it was just whatever suited his mood at the time. 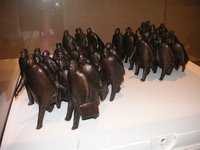 The curator talked about how McElcheran began by satirizing the business world as a "rat race" (the name of his first piece) after witnessing the streams of people rushing around on Bay Street in the 1960's. His statue called "The Crowd" perfectly depicts the sight he has have witnessed and the feeling it evoked in him. When I saw it, I knew the exact feeling since this sea of nameless workers have streamed by me many times when I've tried to walk towards Union subway station while they were going the other way. Eventually though, McElcheran began to sympathize with his caricultures and their plight and saw them as iconic heros in "a non heroic age".

He described the typical process for creating a statue, starting with a wire armature which is covered with clay or plaster, and then filled with fiberglass. When the plaster is hardened and then chipped away, the form of the sculpture is revealed. This form is then sent to a foundry where molds are created to produce bronze versions of the statues. As dictated by the artist, each mold was only allowed to create up to 9 castings of a statue. The entire process to create a statue seemed to take about 2 months. 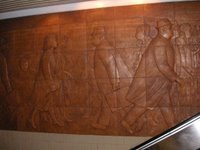 While hearing the curator was interesting, an unexpected treat occurred when it was revealed that William McElcheran's sister was in the audience. She told personal stories about the artist including reading his last letter that he wrote to her before he died, and describing his frustrations on working over 3 years in one of his final commissions, a huge relief carving spanning 3 walls of the Dundas subway station. He literally had to invent a new type of terra cotta/ceramic tile that would not break. The results are breathtaking and should be viewed slowly, taking in the details of each figure. She also showed photographs of some of his other works including huge carvings at Waterpark Place (at the foot of Bay and Front), and a set of 3 nudes consisting of a man, woman and child which he did as a commission for the city of Guelph. This created some controversy at the time. Living much of his life in Italy, McElcheran did not think much of carving nudes. But for the conservative North American community where such things were less common, it came as a bit of a shock.

Posted by A.R. English at 8:22 PM No comments: Links to this post