Halloween is such a fun time of the year, as many shops and even restaurants decorate their storefronts in celebration. We spotted these ghoulish figures at a piano store, a sushi restaurant, a kitchen store and a bong shop.

Last year, torrential rains throughout the Halloween weekend cancelled all of our plans.  This year although rain was in the forecast again, it was much lighter and we were determined not to let that spoil our fun for a second year in a row.

We went to the costume block party held on Church St. between Wellesley St. and Carlton St., not entirely sure how crowded it would be due to the rain.  As it turned out the streets were packed.  As always, the costumes were fabulous and sometimes quite topical, although perhaps not as elaborate as the first year that we attended this event.  Perhaps the rain did scare off some of the fancier costumes.

After last year's aborted attempt, we finally made it out the night after Halloween to see the annual Pumpkin Parade held in Sorauren Park.  We were amazed to see how many pumpkins had been contributed to the parade and how masterfully carved some of them were.

Some of the most impressive pumpkins depicted facial profiles of the cast from The Big Bang Theory, Jack Nicolson in the Shining, and a fierce looking Mayor Rob Ford behind bars.  It would be difficult enough to draw such exact likenesses, let alone carve them into a pumpkin. 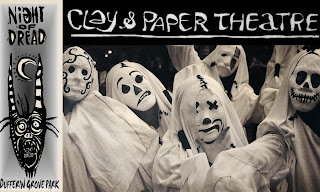 Unfortunately once again, we did not make it out to the Clay and Paper Theatre's annual Night of Dread puppet parade which is held on the Saturday before Halloween.  This seems like such a fun event to either watch and photograph, or even to participate in.  The parade starts at Dufferin Grove Park and includes dancers, musicians, stilt walkers and puppeteers sporting paper mache masks, costumes and floats.  I'm determined to attend this next year, unless there is a monsoon!
Posted by A.R. English at 11:26 AM No comments: Links to this post