After thoroughly enjoying the play War Horse, I was thrilled to win tickets to hear the author Michael Morpurgo speak and read excerpts from the book.  (By the way, if you aren't registered for the Mirvish eStage newsletter, it offers frequent show discount offers and contests). 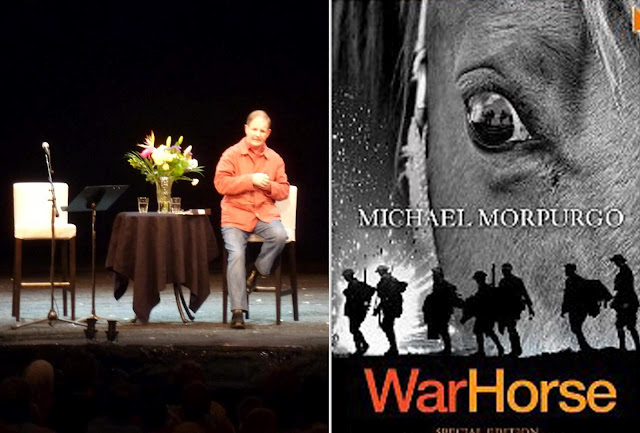 Morpurgo is a gifted speaker and a natural story teller.  During the Q&A session, he was able to take even the most mundane questions and fill his answers with amusing quips and anecdotes.  A testament to his prowess lay in the fact that he kept an audience littered with small children entertained, without the presence of any puppets or visual aids.  When I first saw all those children in attendance, I worried, wondering if they realized that they would spend the evening not watching the show, but listening to some old guy talk.  However they seemed enthralled by Morpurgo and eagerly asked questions of him afterwards.

Morpurgo described how he first came up with the idea of writing War Horse.   He met a WWI veteran who described being placed in the cavalry at 17 without knowing anything about horses.  Scared and lonely, his horse became his best friend to whom he confided how frightened he was and how much he wanted to go home.  Michael thought there was a good story here but was looking for a unique perspective so that he didn’t end up writing another Black Beauty.  He found it when he witnessed a young boy who never spoke to humans due to some trauma, in deep conversation with a horse on Morpugo’s farm.  And the horse appeared to be listening attentively!  This confirmed his idea of writing from the horse's perspective.

War Horse the book tells the story through the eyes of a thoroughbred colt named Joey, who was purchased at auction by a drunken farmer, lovingly raised by the farmer’s son Albert, but then sold by the farmer to the British cavalry during WWI.  Joey struggles to survive the war, moving from owner to owner on both the British and German sides, including Captain James Nicholls, young Emilie and German soldier Friedrich before finding his way back to his beloved Albert.

Apparently the book did not sell well in its original publishing and it was just by chance that 20 years later, a director looking for a vehicle to stage a play with handspring puppets was made aware of the book by his mother ("I just read a book about a horse by a man with an unpronounceable name").  The rest is history...

Morpurgo proceeded to read passages from War Horse, his voice animated and dynamic. Immediately you are able to identify with Joey and become engrossed in his travails.  Melanie Doane, the violinist and singer from the play, provided musical accompaniment, which added emotional resonance to the reading.


I've since read the book War Horse and enjoyed it immensely.  While the play keeps most of the important plot points from the book, there are some significant differences.  The play could not easily portray the story from Joey's point of view and so it becomes more of a traditional story between a boy and his horse, focusing more on Albert's journey to reunite with Joey (typical love story plot of boy meets horse, boy loses horse, boy gets horse back).  Having experienced both, I think they are each excellent in their own ways although I prefer the ending of the book which I found to be more powerful and moving.

During the Q&A, Morpurgo revealed that Joey was named after the foal of the horse that the young “mute” boy on his farm was talking to.  In describing the critically lauded War Horse play versus the not so acclaimed Steven Spielberg movie, Morpurgo tactfully summarized that while the movie followed the plot of the book more closely, the play captured the heart and the spirit of it. In describing the effectiveness of the handspring puppets in the play, he tells of how the actor who portrays Friedrich laments that although he acts his heart out, no one cries for him when his character is killed.  They don't care about the humans .. all they care about are the bloody horses … the puppets!

The author’s note in the book describes a painting of Joey that hangs in the village hall with the dedication “Joey – painted by Captain James Nicholls, autumn 1914”.  A busload of Canadians visited his home town and were anxious to see the painting.  To not disillusion them, they were told it was out being cleaned.  “Don’t they realize it’s a book!?!” Morpurgo humorously roared.  So he got the props department from the movie to make him a painting with that inscription and hung it in the village hall, so that “no more Canadians would be disappointed”.

It was great fun listening to Michael Morpurgo speak and I’m glad it prompted me to read the book.  I hope the success of the play inspires more people to do so as it really is a wonderful book.  I’m not sure I want to watch the movie though.