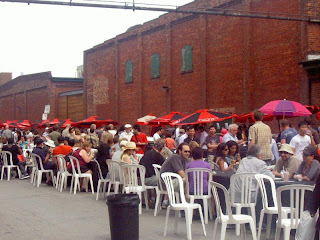 Luminato, now in its second year, is Toronto's "Festival of Arts and Creativity" that runs for 10 days in June. The Distillery District was a great place to partake in multiple Luminato events, which seemed to cater to all the senses. There were the usual street dancing and musical acts to be enjoyed by the eyes and ears. But this year, for the first time, a culinary component was added to stimulate your senses of smell and taste.

The concept behind One City, One Table was to promote diversity in dining opportunities in Toronto, while supporting the concept of a united community, by having everyone dine at a single 500ft long table that spanned across Mill Street. Top-named chefs from high-end restaurants across Toronto (e.g. C5, Perigee, Edo, etc) provided their versions of street food tastings for $5 per serving. A secondary motivation could have been to prove a point that these chefs have been making recently, which is that street food does not have to be confined to the boring hotdog carts that currently litter our streets. 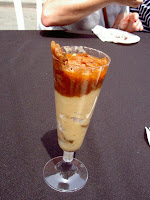 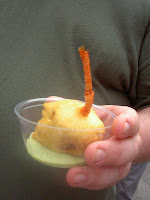 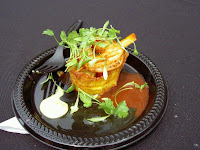 Instead, we were treated to such delicacies as Crab and Lobster corn dog in an avocado aioli sauce, Kobe beef hotdog with sauerkraut, wild mushroom risotto topped with osso bucco served in a plastic champagne flute, and plantain chip wrapping a salad of chopped tomato, zucchini, red onion and avocado, topped with a jumbo shrimp skewered by a sugar cane. Granted, I think we'd be holding our breaths to expect such treats to start showing up on regularly on street corners, but it does open the imagination to what improvements could be achieved in this area. 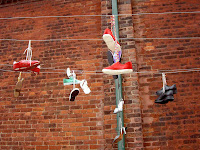 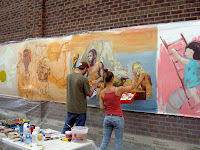 In addition to this eating feast, there were many other fun events available at the Distillery for Luminato. Visual arts ranged from a 100 ft continuous mural, to drawings by school children, to "performance art" involving shoes thrown on telephone wires, and the stories behind them, which were posted on the telephone poles.

Inside the Young People Theatre, we watched 3 original short skits written, acted and directed by young, up-and-coming talent from Toronto. The skits ranged from insightful dialogue about a withering relationship, to witty repartee between two distant cousins discussing the implications of one cousin's job as a call girl, to a 10 minute reenactment of all four books of Tolstoy's War and Peace. Each skit came with live musical accompaniment and foley sound effects. 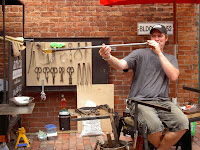 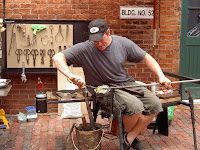 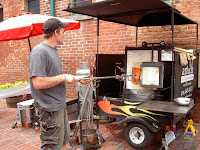 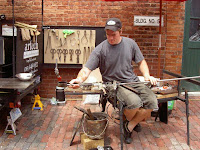 A fascinating demonstration of glass blowing showed a non-descript blob of glass being transformed into an exotically decorative drinking goblet.

All in all, the Distillery District provided a one-stop location chock-full of interesting events that clearly fulfilled the goals of the Luminato festival.
Posted by A.R. English at 11:30 AM 1 comment: Links to this post