AGO - Revealing the Early Renaissance and Other Exhibits

Being neither religious nor a fan of religious art, I tried to appreciate the AGO's new exhibit "Revealing the Early Renaissance" more from a historic perspective than an artistic or spiritual one.  The audio guide, wall plaques and members' talk helped to put the pieces in context and explain their significance relative to previous religious works from the Medieval times.

We learned how the wealthy Florentinians of the 1300s commissioned religious art as a way to assuage their guilt over the prosperity that they were experiencing, and perhaps to show off their wealth a bit as well.  This new source of funding for works that previously were mainly paid for by the Church, led to changes in the artistic endeavours in terms of both style and subject matter.

Compared to the preceding Medieval period with its formal, ritualized portrayals of religious icons, the art took on a more expressive, realistic style, depicting figures in proper human scale and perspective.  The "Peruzzi Altarpiece" by Giotto di Bondone provided a good example of this.  The four panels on the left including paintings of Saint John, Mary Magdalene, Jesus and Saint John the Baptiste seem stiff and wooden compared to the more subtle, pensive depiction of Saint Francis on the far right.  The theory is that only Saint Francis was actually created by Giotto di Bondone, while the other figures were done by his apprentices who still used the old Medieval techniques.

A hinged panel triptych by Bernado Daddi reveals the Virgin Mary stretching her hand down beyond the heavenly realm into the earthly realm.  This depiction of "human" interaction was unusual prior to this period.  Many beautifully illuminated manuscripts were also on display with colourful scenes, initials and symbols either imbedded within the text or drawn along the borders.  There were also several striking examples of stained glass by Pacinodi Bonaguida.


The subject matter of the Florentine Renaissance art started to stray from religious imagery to include the day to day lives of merchants, tradespeople and artisans.  The very first artifact on display in the exhibit was a grain merchant's ledger which he had illuminated as a way of leaving a legacy of his life's work.

It was a bit startling to see extremely graphic and gruesome renderings of the crucifixion of Jesus with blood gushing out of his wounds, or the martrydom of various saints including the beheading of Saint James the Greater and the burning on hot coals of Saint Lawrence.

Patti Smith's "Camera Solo" exhibit focuses mainly on very personal, black and white photos that she took over the years.  Many of them are of objects that she either collected or wanted to remember, and are accompanied by a written description explaining their significance.  These include images of two pairs of slippers, one belonging to her partner Robert Maplethorpe and the other to Pope Benedict VX, her father's teacup, and artist Frida Khalo's dress.  In some cases, the actual artifacts were on display next to the photos. 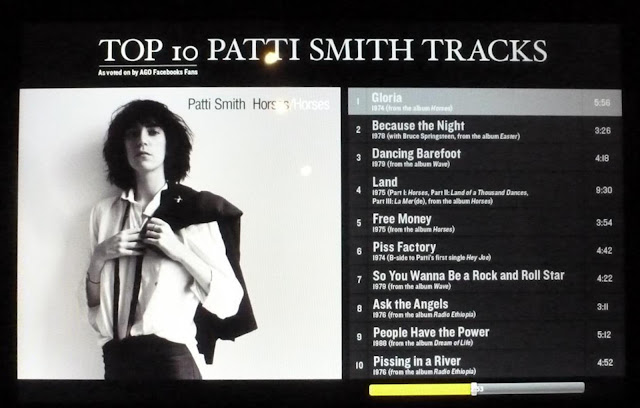 Smith is probably better known as a singer-songwriter.  In the first room of the exhibit, a tablet was set up to play her top 10 songs as voted by fans on Facebook.  I had only heard of two of them before–"Because the Night", which she wrote and performed with Bruce Springsteen, and "Gloria" (G-L-O-R-I-A),  although I only knew the original version by the group "Them".  I was impressed by her cover version which had deeper, poetic lyrics invoking religious imagery, and a punk sound.  In general, I really like her deep smokey voice and enjoyed all the chosen songs in this list.  I spent quite a bit of time listening to the songs on headphones while browsing through Smith's books of poetry.

The first time we encountered Kim Adams' art was at the Hamilton Art Gallery where his Bruegel-Bosch Bus is installed.  This is a 1960 Volkswagen bus that is covered with vintage toys, models and figurines.  The installation currently displaying at the AGO, called Artist Colony (Gardens), continues with his usage of miniatures.  He constructs a mini world filled with scenes from both urban and country life, with a focus on food production.  The details are fascinating to see and include humourous vignettes such as a man coming out of an outhouse while his fellow camper is trapped up a tree by bears, people enjoying the beach or outdoor patios, culprits being arrested while reporters photograph the takedown, farmers picking crops and tending to live stock.

We stumbled upon a collection of art from the Netherlands that I found quite intriguing.  One painting of a winter scene of villagers playing on an ice pond was reminiscent of a Cornelius Krieghoff painting, except for the 17th century Dutch clothing that they wore, and windmills in the background.  Another depiction of nine dutch proverbs by Pieter the Younger Brughel had us trying to guess what the sayings were, based on the diagrams.  I found a few of them later on the internet, including "Filling the Well After the Calf Has Drowned", or in other words, "Too Little Too Late".  Finally, I was mesmerized by the painting of a woman holding a skull in her hand.  The lighting effect on her face was stunning to behold.  As so often happens, I found myself enjoying these unexpected, unadvertised finds within the gallery as much as I do the big blockbusters exhibitions.
Posted by A.R. English at 6:09 PM No comments: Links to this post 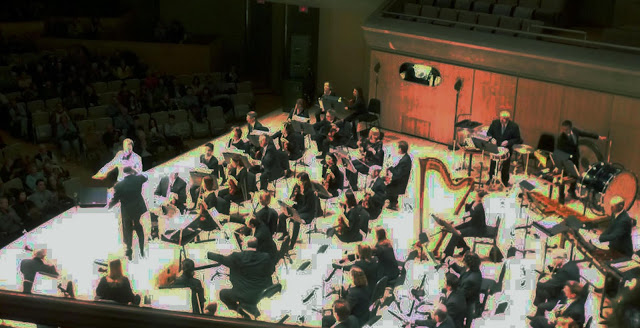 We do not often frequent the Toronto Symphony Orchestra (TSO), since I can only appreciate classical music in small doses.  Sitting through an entire concert of this would probably put me to sleep.  Every once in a while, the TSO selects music with a contemporary theme that I can recognize and enjoy.  A few years ago, we listened to them play songs from the Swedish group ABBA.  Today, we attended an excellent performance based mainly on music from the James Bond movies.  Following the iconic main Bond theme,  memorable songs spanning the entire movie cannon were covered, ranging from the first theme song "To Russia With Love" through the most recent Oscar-winning song "Skyfall". 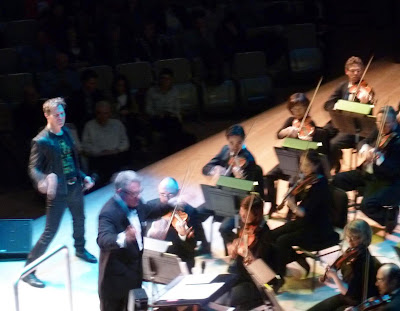 The dynamic, personable conductor John Morris Russell humorously introduced each piece, proferring quips about his opinion of the various Bonds (Sean Connery - yeah! Roger Moore - meh...) and movies.  Dressed in a Bond-like black tuxedo, Russell's voice and mannerisms reminded me of comedian Drew Carey.  His banter put the audience at ease and really added to the experience.

Broadway performers Ron Bohmer and Capathia Jenkins provided the male and female vocals for the songs.  While Bohmer was good in his renditions of Thunderball (channeling Tom Jones), "From Russia With Love, Live and Let Die and You Know My Name", it was Jenkins who brought the house down with her power ballads. 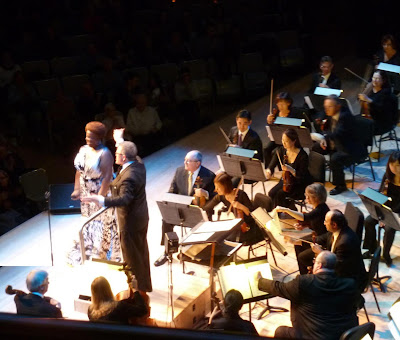 Jenkins was stellar as she belted out tune after tune including "For Your Eyes Only, Tomorrow Never Dies, Surrender, Diamonds Are Forever, Skyfall, License to Kill, and The Look of Love.  The final "The Spy Who Loved Me" suite  was a tribute to recently deceased Marvin Hamlisch who wrote the score.  Prior to singing the associated theme song "Nobody Does it Better", Jenkins reminisced about how Hamlisch used to take his cast out to dinner after a show and would order one of every single dessert on the menu so that everyone could share.  During an interlude in one of her songs, while the orchestra played, Jenkins and conductor Russell shared a sweet little dance.

Each vocalist changed costumes about 4-5 times with Bohmer  appearing in everything from tuxedos to jeans, while Jenkins came out in an array of beautiful gowns. At the beginning of the second half,  a series of spy-genre related theme songs were performed by the symphony including "Mission Impossible, The Avengers, Pink Panther, Shaft and the Peter Gunn Theme".  From our vantage point, the silver-haired saxophone soloist, who was featured in several of these pieces, bore a strong resemblance to Bill Clinton.

Although our seats were way off to the side, we were not very high up and therefore had a good view of two-thirds of the orchestra including the harpist and secondary percussionists who handled the tambourine, triangle, gong and some shaky instrument that sounded like a maraca.  I found myself comparing their relatively minor roles to that of the violinists, who played constantly and vigorously for two hours, and wondered if the musicians were paid based on number of notes played.

Listening to this beautiful music made me wish that I was even slightly musically inclined.  Maybe if I practised really hard, one day I might be able to handle that triangle.
Posted by A.R. English at 10:40 PM No comments: Links to this post