Theatre: Marry Me A Litte - Elegies: A Song Cycle 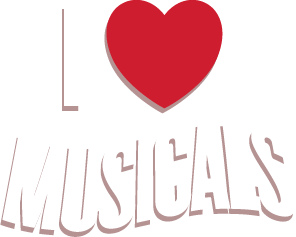 I unequivocally and unabashedly love musicals, whether presented in movie or live theatre formats.  I will give just about any new musical a try, but I've always preferred ones whose lyrics convey the plot and narrative through verse.  For me, Jersey Boys did not fit my definition of the perfect musical–rather, it was a play which included characters singing some tunes by the Four Seasons.

The songs don't have to be originally created for the musical, but they do have to make sense in advancing the plot.  Mamma Mia was one of the most successful recent examples of adapting songs from another source into a musical and cleverly weaving in the story-line to match the words of those songs. I also prefer a musical that actually has a plot that runs from beginning to end, rather than ones where each song is a separate vignette.  Accordingly, I was less than enamoured by two recent musicals which I watched, because they did not meet my personal criteria of an enjoyable musical. 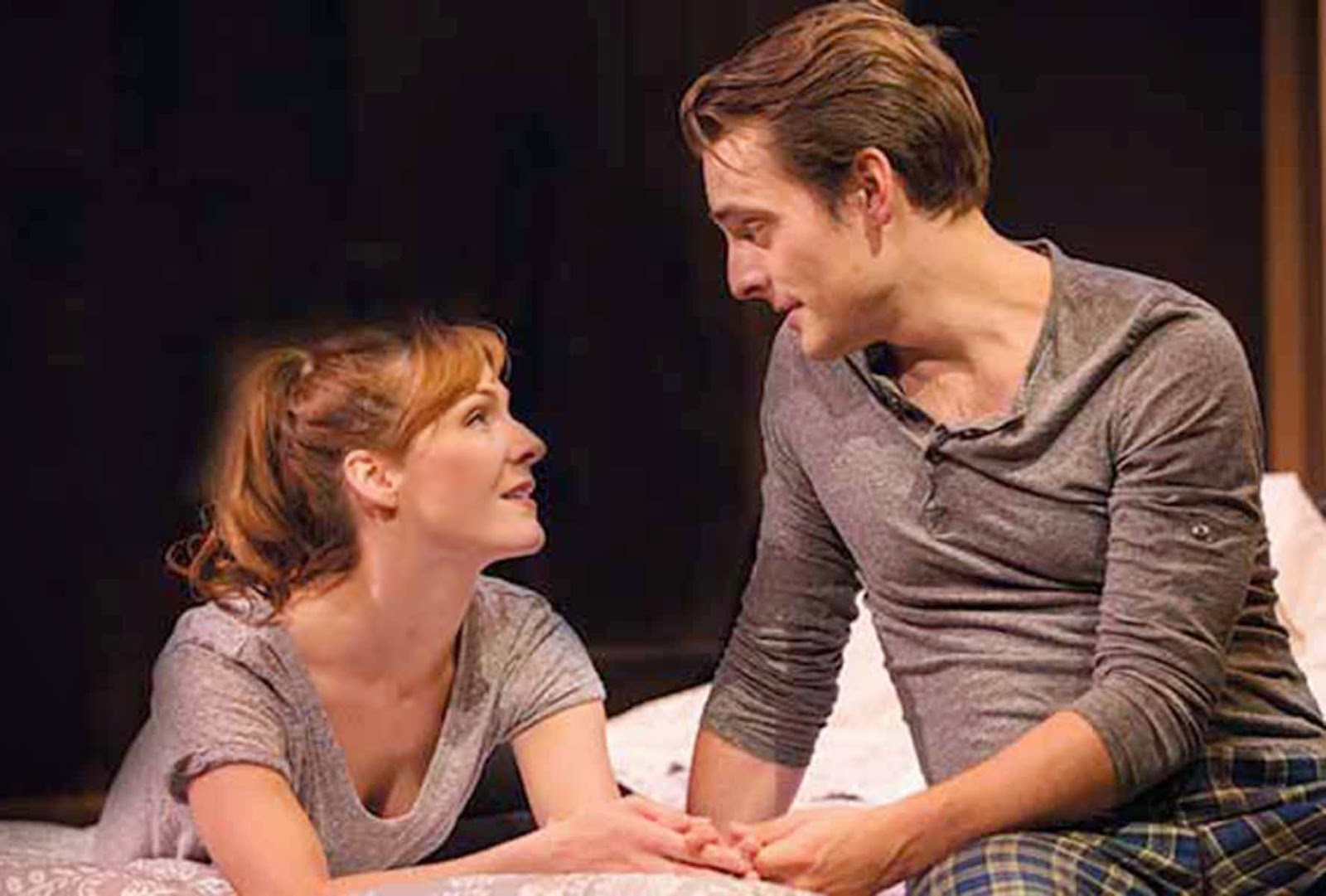 The Tarragon Theatre hosted a new adaptation of Marry Me A Little, a 1980's musical which strings together songs written by Stephen Sondheim for different musicals, most of them cut and never used in those musicals.  Since I think that Sondheim is a bit of a lyrical genius, even his "second-rate" songs are still complex and entertaining.  The problem is that his lyrics are so detailed and specific that they are not easily taken out of context.

Told entirely through song, this adaptation attempts to show the rise and fall of the relationship between two lonely New Yorkers.   Unfortunately the songs don't all work in telling the story or advancing the plot, especially in the middle section, which dragged on a bit.  More is discerned from the actors' glances, expressions and pantomimed gestures than from what they are actually singing.

The best usage of the Sondheim songs comes towards the end of the musical, when the female declares her love by singing the titular song, originally used in the musical Company– "Marry me a little .. I'm ready!!".   The horrified look on the male's face while she was singing this was hilarious.  He replied with lyrics from the misleadingly named song Happily Ever After, which was cut from Company–"Someone to hurt you too deep...  Someone to read you too well .. that's happily ever after - in Hell!".   If the lyrics sound familiar, it is because very similar lyrics were used in the climatic song called Being Alive, that ended up as Company's eleven-o'clock number.  My favourite lines came from the breakup song Rainbow (written for Into the Woods) that highlighted the couple's differences in personality and outlook on  life. He tells her "You're always expecting rainbows" and she replies "You're always expecting rain".

Despite my ambivalence about the musical itself, I was impressed by the talented two-person cast for their singing and acting abilities.  The staging was also very innovative in the way they used the same set and space to represent each person's apartment prior to their meeting.  The two of them weave around the two symbolic, but one physical apartment at the same time, making it feel like a choreographed dance.  It was also interesting to watch the piano player who provided the background music, seen clearly through an "apartment window".  This was juxtapositioned with the male lead, who was a composer and played the piano within the apartment, as part of the scene. 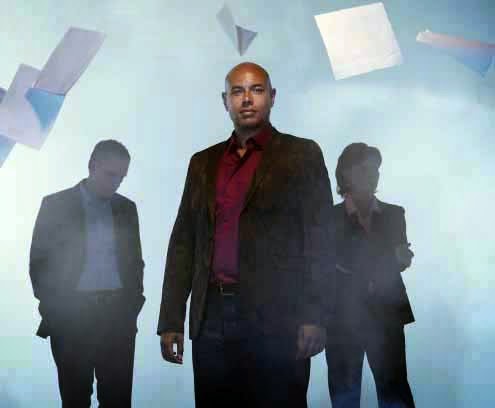 The second musical that I didn't quite connect with was Elegies: A Song Cycle.  I  actually resisted watching this show the previous times that it was staged, because I knew that there would be no plot, but in the end, I was swayed by the glowing reviews.  As the title clearly intimates, this musical is comprised of a series of relatively disparate songs that each eulogize the death of a family member, friend or even pet of the composer William Finn.

The problem with these vignette songs is that there is very little time to reveal the back-story and establish an emotional connection with the unknown deceased who is being eulogized. The exceptions for me, were the elegies for Mark, the lawyer who used to host the annual "All Men's Thanksgiving Dinner", and Monica, who asked for a special song to be written and performed at her funeral.  By the time their deaths (from AIDS and cancer respectively) were described, I felt an affinity towards them and was touched by their passing.

There were a few light-hearted songs, including one that lamented the early demise of all of the composer's beloved pet dogs, compared to the unjust longevity of the one dog that he despised.  The last few songs were powerful tributes to 9-11 terrorist attacks.  I did not realize this at the time of viewing, so they seemed like just two more generically sad songs that followed an entire afternoon of melancholy.  Now that I understand what these songs were supposed to be about, I appreciate both the lyrics ("Just saying my goodbyes" .. "Boom, Boom, He sees his buildings burn) and the staging (papers were thrown up in the air and allowed to float to the ground, to symbolize the impact of the falling of the twin towers) so much more.

I think I was in the minority in my assessment of Elegies, since the rest of the audience gave the cast a standing ovation.   In fact, the cast was very strong in general, with Thom Allison being the standout both from a singing and acting perspective.  Structurally and plot-wise, or lack of plot-wise, it just wasn't my cup of tea.. but I should have known that and probably not gone to see this.
Posted by A.R. English at 7:33 PM No comments: Links to this post 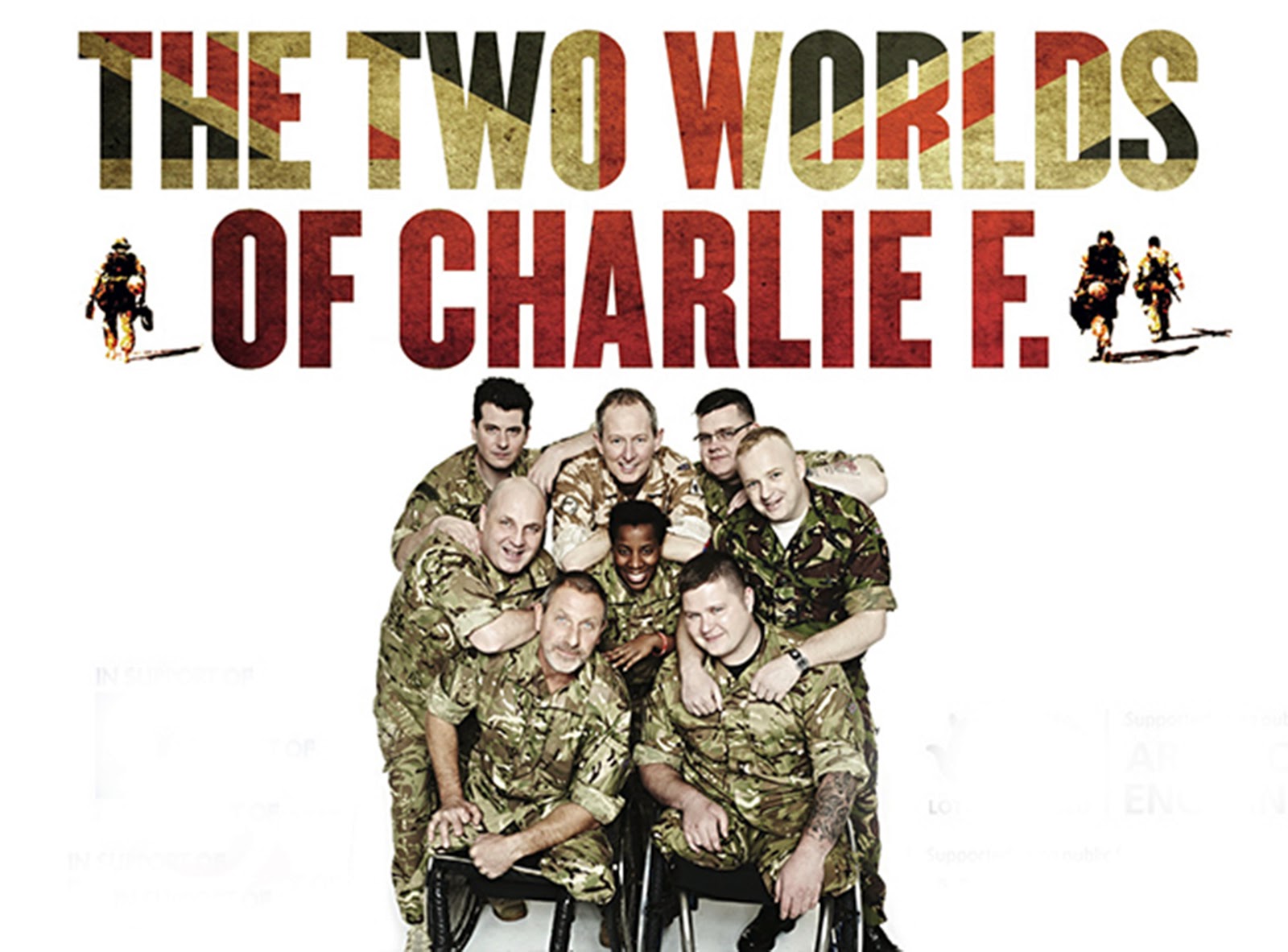 When preparing myself to watch "The Two Worlds of Charlie F", based the real life experiences of and starring actual soldiers who have been injured on active duty, the words "poignant", "gripping", "inspiring", "powerful" and "illuminating" all sprang to mind.  The play certainly fit all of these adjectives.  What I did not anticipate was how unapologetically irreverent, and even occasionally humorous it would be. 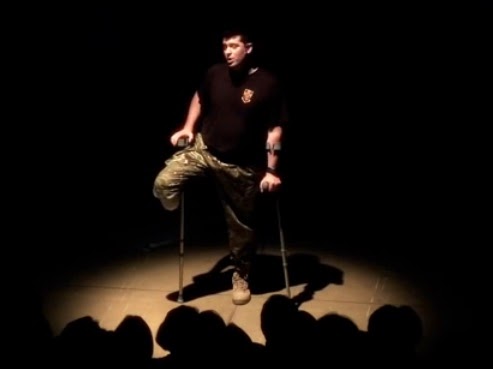 Right from the start, the soldier/actor who played titular Charlie F. defiantly flaunted his amputated leg.  He walked onto the middle of the stage with the help of crutches, the stump of his missing right leg clearly exposed, then hoisted the stump up over the top of his right crutch and stared out at the audience with a cheeky grin, almost daring us to comment.  The action was reminiscent of the old gunslinger movies where the hero would sling his leg over the bar stool at the saloon. 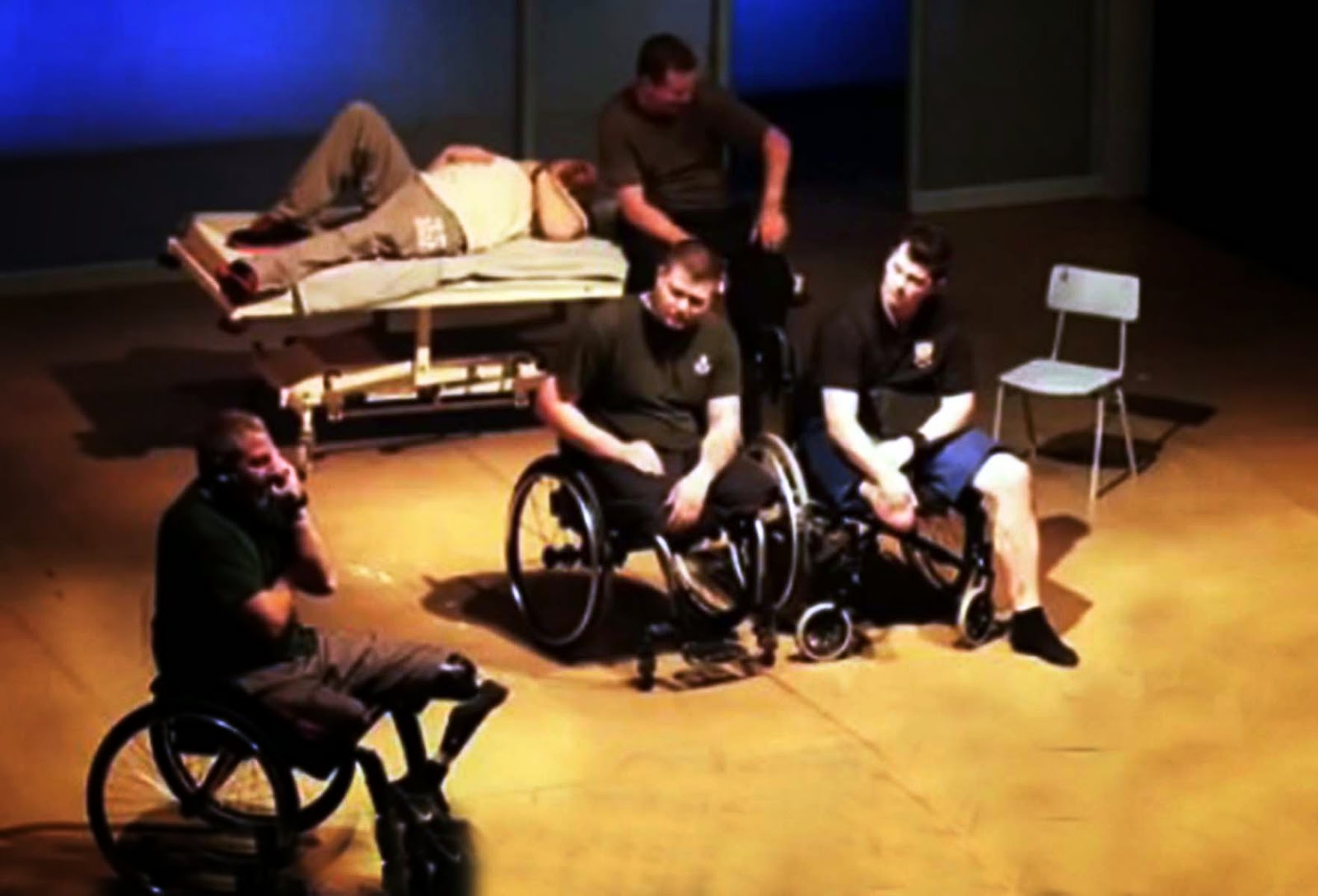 This play was developed as a type of therapy, to give wounded soldiers a voice, and act as a vehicle for them to share their experiences, pain and trauma.  In addition to professional actors, the cast included men and women of the military who have suffered brain damage, are single and double leg amputees, paraplegics, have fractured spines, and other injuries. 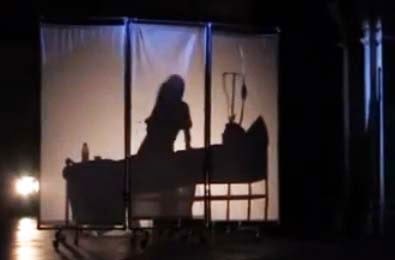 The opening scene is based on Charlie F. portrayer Cassidy Little's real experiences when waking up in the hospital after his injury, suffered in an IED blast.  Disoriented, afraid, and thinking that he had been captured by the Taliban, he thrashed, called for help, fought off and swore at the nurse, doctor and even his own family who tried to calm him.  The scene was shown eerily as a silhouette, as the action took place behind a screen.

We were then presented with the histories of the vets, why each of them joined the military and how they were wounded. The real-life soldiers played characters that were closely based on their own stories.  Maurilla Simpson and her character Lance Corporal Simi Yates shared the same back-story about growing up in Trinidad, wishing to be a soldier and to move to where "the Queen lives".  Charlie F./Cassidy Little joined the Marines as a quick way to win a bet that he could get into shape.  This was followed by scenes depicting the training that the soldiers went through, including learning how to handle their weapons and the importance of their gear.

In a very powerful scene called "Field Medic Course", an instructor explained what happened to the human body when you stepped on an IED.  He illustrated the point by drawing marks on a stripped-down soldier's body to indicate the areas of destruction.  He described the results of losing too much blood, or if your arms or legs got crushed by a blast.  But the most pressing concern for most was whether their testicles and penis were still intact.

The final scene of the first half symbolically played out the contact with the enemy that resulted in the soldiers' injuries.  As devastating as this scene was, it was just the start of their journey.  What followed in the second act, which dealt with their physical and emotional recovery processes, showed that their experiences will stay with them forever.  Doctors, physio therapy, psychologist visits, flashbacks, nightmares, anxiety, feelings of alienation, are all part of their new reality.

To our surprise, although not quite a musical, The Two Worlds of Charlie F. actually featured songs and even choreographed dances involving the entire cast.  The soldiers chanted spiritedly as they went through their physical training period (.. "Just one way to survive.. you work as a team to make it out alive" ...).  When receiving physical rehabilitation treatments and medications, they sang a song whose lyrics simply named all of their pills, to highlight how many were required ( ... "Codeine, Tramadol, Fentenyl"... )  There was even a beautiful dance between three soldiers in their wheelchairs and their respective loved ones.  As the soldiers spun and moved across the stage in their wheelchairs, the women danced around them, jumped into their laps, and even did flips over them.

It was enlightening to also get the family's perspectives, as wives, girlfriends and mothers described about how difficult it was, not knowing what was happening. During their regular phone calls and letter communications, ".. I talk about .. the weather .. when I really want to ask him if he got shot at today...".  They then had to deal with the post-traumatic stress symptoms when their men returned.

The soldiers sang a haunting "Sleep Song" about how "it's worst at night, scared to close my eyes.. I'm not reliving it, I'm living it".  They woke up thrashing and fighting and occasionally even accidentally punched their wives in their sleep.  The women described how they had nightmares too.  One woman found out about her husband's injuries at 5am, and now she wakes up every morning at 5.  It's in her "body clock forever".

This play gives such a unique perspective of the realities of war, as it comes right from the horse's mouth.  We left feeling inspired, grateful and full of admiration for these brave men and women.
Posted by A.R. English at 4:32 PM No comments: Links to this post