Got tickets from a friend to go to the TIFF Bell Lightbox Sunday morning to see a movie that was part of their World Cinema series. You are shown a foreign film that is not announced until you get there, followed by a discussion and Q&A about the movie. Our movie was Tirza, a tense drama about a father searching for his missing daughter that is Netherlands' 2010 submission for the Best Foreign Film Oscar. The movie was full of political messages and symbolism and required you to pay close attention since things are not as they initially seem. This generated very interesting dialogue between the host, the guest film critic and the audience.

To get some exercise, we decided we would try to walk home from

King & John St to Yonge & St. Clair. We knew that the Santa Claus parade was happening some time during the day but were not sure of the schedule or the route. We first ran into the parade at Yonge & Queen, in front of The Bay and tried to avoid it by walking

through the Eaton Centre. Coming out at the SW corner of Yonge and Dundas, we were met by a mob of people that blocked our path. We considered trying to dash across the parade, but didn't like the prospect of trampling on some little kids just to get mowed down by a bunch of dancing penguins.

the direction that we wanted, we inadvertently ended up following the entire parade route backwards - west on Dundas to University, north on University to Bloor, and then west on Bloor to Bathurst where the parade started. It actually turned out to be a very efficient and warm way to watch the parade quickly,

walking towards the approaching parade rather than standing in the freezing cold waiting for the parade to slowly come to you. We got to the end of the parade just in time to see the big man himself. If you're wondering where Santa Claus lives, I'm convinced it's in Honest Eds. At that point, we were so off course that we gave up on the walk and hopped on the subway, which we were now finally able to reach once the crowds dispersed.
Posted by A.R. English at 5:38 PM No comments: Links to this post

Rich and I became members of the Art Gallery of Ontario at the end of last year since it seemed like the most economical way to see the King Tut exhibit. Having the membership allows us to drop in regularly for a few hours to see the new exhibits, without having to feel like we need to spend the entire day there to make the

admission worthwhile. You also get 10% off at the gift shop, the Frank restaurant and the excellent cafeteria in the basement that serves the most delicious soups.

We've taken all the regular guided tours, such as the architectural tour of the newly renovated Frank Gehry design featuring the Galleria Italia, and the tour of the AGO's most prize possessions, highlighted by Ken Thompson's donation of Peter Paul Rubens masterpiece "Massacre of the Innocents" as well as an over-abundance of Krieghoff paintings which all start to look the same after wandering through 4 huge rooms full of them. There are also great "mini-tours" that focus on either the Canadian, African, European or Contemporary collections. 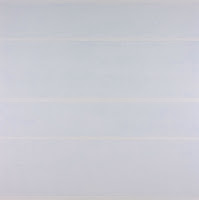 Taking a tour of the Contemporary collection (which changes quite frequently) is the most fun, since you have someone explain to you why you are admiring a pile of rocks or a totally black canvas with a single dot just off centre. We witnessed quite a surreal scene at our visit this weekend. There were a group of "paintings" by Agnes Martin on the wall, each one basically a white canvas with horizontal lines of varying thickness running across them. Seated in folding chairs were a group of art students(?) sketching these paintings. I stared at them, and then back at the paintings for a while wondering if I was missing something. Perhaps they saw something deeper and more meaningful that what I did? Perhaps the point was to imagine what could have been? I sneaked up to one of the sketchers and peeked over his shoulder at his pad, and there was a drawn a rectangle and some carefully shaded horizontal lines. I still don't get it...
Posted by A.R. English at 8:40 PM 1 comment: Links to this post

Priscilla Queen of the Desert the Musical 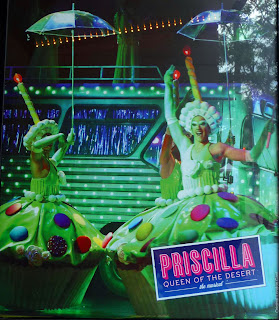 Absolutely loved watching Priscilla Queen of the Desert, the Musical which is playing at the Princess of Wales.

Based on the campy 1994 movie "The Adventures of Priscilla Queen of the Desert", the musical is about 3 drag queens (Mitzi/Tick, Bernadette/Ralph and Felicia/Adam) on a road trip through the Outback in Austrailia driving a bus named Priscilla, enroute to meet Tick's son Benjamin. The musical features disco music from the 70s and had too many costume changes to count, each one stunningly colourful, extravagant and outlandish.

Where the movie used songs mainly to show the performances of the drag queens, the musical did a great job of incorporating extra songs to advance the story, picking songs that blended well with the overall genre and era of the rest of the music. The best addition was the tear-inducing Elvis Presley ballad "You were Always On My Mind", sung by Tick to his son Benjie. It perfectly reflected the thoughts and emotions of the character in that moment and was my favourite song of the show. Other songs that made you want to get up and dance included "I Will Survive", "MacArthur Park", "Boogie Wonderland", "It's Raining Men". The entire last song, "Finally" and following bows and encores were performed to a standing ovation.

The musical first premiered appropriately in Austrailia (where the movie is considered a cult classic), then moved to London, and is now showing in Toronto as a warmup for a run on Broadway. It is interesting to note that as the show moved through each continent, the music was changed slightly to reflect the popular music of the new locale. By the time it hit North America, songs by and references to Kylie Minogue were replaced by Madonna.

Some of the scenes and costumes, especially earlier on in the show, might be a bit risque for young children or elderly patrons, but the show is so much fun and full of energy that hopefully no one will mind. It was fun to see people in the audience decked out with souvenir feather boas and martini glasses, both of which were featured prominently in the show. I need to go out and rent the movie again!
Posted by A.R. English at 1:00 AM No comments: Links to this post