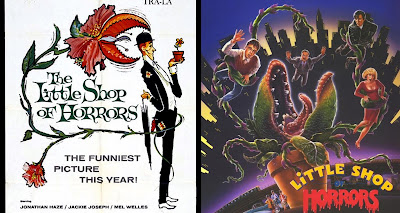 My only previous exposure to Little Shop of Horrors was the campy 1986 musical film directed by Muppets puppeteer Frank Oz, starring Rick Moranis as Seymour, the schleppy assistant at Mr. Musnik's flower shop, who purchases what turns out to be a talking-plant from out of space that feeds on human blood.  Seymour is smitten with his coworker Audrey who is dating a sadistic dentist (played with gleeful malice by Steve Martin).  Seymour names his plant Audrey II after his beloved but finds it more and more difficult to satisfy Audrey II's growing need for more blood.  I had not watched the original 1960 black comedy/horror movie directed by Roger Corman, nor the 1982 off-Broadway musical written by Alan Menken and Howard Ashman (known for Disney animated movies), so I was not aware of the differences between the three versions.

It was therefore of great interest to me when I watched the live musical production of Little Shop of Horrors for the first time.  Playing at the Lower Ossington Theatre, a smaller venue with a lower budget than the shows that I am used to watching with Mirvish productions, I was not expecting much in terms of stagecraft.  I was pleasantly surprised by the clever use of a very limited space, and by the masterful puppetry involved in portraying Audrey II at its various stages of growth.   In order to accommodate the many changes in set locations, a round turntable is used as part of the stage, in a similar vein to the one used in Les Miserables, but on a much smaller scale and controlled by man-power as opposed to electrically operated.  In some scenes, you can catch sight of two stage hands dressed in black, squatting on the ground manually rotating the stage.

In terms of the different versions of the plant, we counted at least four. There was the initial inanimate, tiny plant in a pot that Seymour held in his hand when he first purchased it.  Then after feasting on a few drops of blood from Seymour's accidentally cut finger, Audrey II had grown to a big potted plant that Seymour grasped with both arms.  This version of the plant moved and talked!  If you looked closely, you could see that one of the arms holding the plant was fake and the actor's real arm was actually under his jacket manipulating the puppet.  The illusion was very effective.  The next version of Audrey II was significantly bigger, consisting of a single seated puppeteer manipulating the plant's head and arms.  A final version of the plant was so large that it was capable of actually "swallowing" its victims whole and sucking them into itself.  This last giant plant required two puppeteers to control all the moving parts, probably the same two acting as "stage-hands" to rotate the turntable.

Comparing the 1982 live musical to the 1960 original movie and the 1986 movie remake that was based mostly on the musical, the basic plot and Skid Row setting is the same for all three but the tone and some major plot points differ between them.  Shot in black and white and not being a musical, the original 1960 film plays more like a mix between a Film Noir with dark shadows and a reluctant hero that doesn't get the girl, and a schlocky horror flick.   In this version, Seymour accidentally causes the death of a railway man and a call girl, and kills the sadistic dentist in self-defense, feeding each of the bodies to the plant.  The only moment played for true comic relief comes in the role of a masochistic patient who wants pain inflicted upon him.  The cameo is especially memorable since it is played by a young and then unknown Jack Nicholson in one of his first movie roles.

The two musical versions are both more lighthearted, irreverent and goofy.  The off-Broadway musical cut out many of the extraneous characters from the original movie and limited the "plant-food" victims to core cast members.  It turned the sadistic dentist into Audrey's abusive boyfriend to give Seymour a stronger motivation for killing him.  It also made Mr. Musnik more sinister and threatening to justify his being fed to Audrey II as well.  Finally a trio of street urchins double as a "Greek Chorus", providing background information and commenting on the gruesome situations that they witness from the sidelines.  While the Off-Broadway show cut out the cameo by the masochistic patient, the 1986 movie played up the camp even more by casting Bill Murray in the role opposite Steve Martin's dentist.

As expected, the 1986 movie cut out multiple transitional songs from the Broadway musical score, handling the plot points via dialogue instead.  But it was in the endings where the starkest differences between the two versions could be found.  The musical is much darker, with Audrey II consuming all the principal characters and then achieving world domination when clippings of its floral buds are spread across the planet.  While the movie originally filmed a similar ending that played out like a Godzilla movie, it did not test well during trial screenings and the director was forced to tack on a happy ending where Seymour and Audrey defeat the plant and get married.  Since this latter ending was the only one that I knew about, it was a bit shocking to watch the musical's denouement, although there was a lighter, wacky sequence at the end where the principal characters show up dressed like newly flowered plants, singing the finale song "Don't Feed the Plants".

I am really happy to have now watched all three versions of Little Shop of Horrors and have appreciated each one in its own right.  But witnessing the Audrey II plant grown before my eyes was really special and made me enjoy the live version most of all.  After watching this musical, I have newly gained respect for the productions presented at the Lower Ossington Theatre and look forward to watching more shows at this venue in the future.
Posted by A.R. English at 3:00 PM No comments: Links to this post