Most of the titled characters of the comedy Vanya & Sonia & Masha & Spike, by Christopher Durang, are named after characters in plays by 19th Century Russian playwright Anton Chekhov, with "Spike" being the notable exception.  Vanya is obviously from the play Uncle Vanya, as is Sonia. The name Masha can be found in two plays, Three Sisters and The Seagull.  Durang also incorporates common Chekhovian themes such as frustrated hopes and disillusionment with life. 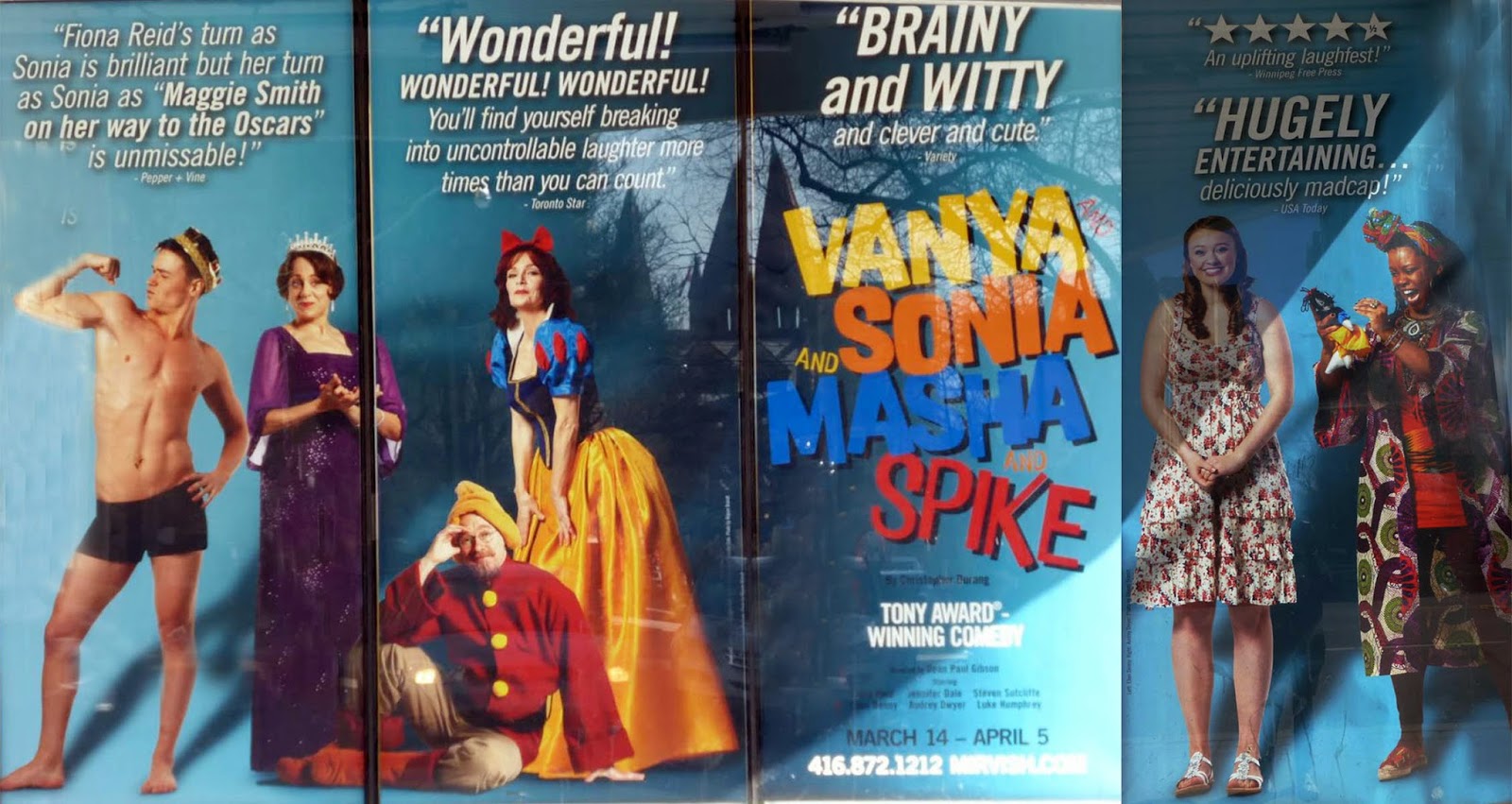 Vanya, Sonia and Masha are siblings in their 50s.  Like their namesakes, Vanya and Sonia feel that life has passed them by and that they have accomplished nothing in their boring existence, much of which was spent caring for their parents who are now deceased.  Sonia has the extra baggage and insecurity of being adopted and feeling that she is a bit of an outsider in the family.  Masha is a vain, self-absorbed fading actress who justifies not helping to take care of  her parents by frequently reminding her siblings that she is the one who pays all the bills, while they have never held a job.   After five failed marriages and a waning career, Masha tries to hold on to her youth by dating a much younger actor, the preening, ostentatious Spike, who looks for any opportunity to take his clothes off.  Rounding out the cast are Vanya and Sonia's clairvoyant maid Cassandra, who spouts dire warnings mostly ignored but sometimes correct, and the young ingenue and aspiring actress Nina (also a character in The Seagull), who is seen as a threat by Masha.

Durang weaves in many references to Chekhov's plays in addition to the siblings' names.  In describing her boring life, Sonia quotes "I'm in mourning for my life"  from the play The Seagull, and lampoons the poignant line "I'm the seagull", instead declaring hilariously "I'm a wild turkey"¹.  Masha laments missing out on performing a theatre role of the play Three Sisters by repeatedly quoting from it "Oh Olga, let's go to Moscow".  Nina affectionately calls Vanya "Uncle Vanya", and refers to her birthday as her "name day", much like they do in the play The Party.  Vanya is inspired to write an experimental play, like the character Konstantin does in The Seagull.

There are several discussions regarding whether the 8-10 cherry trees on the property constitute an orchard–a clear reference to Chekhov's play The Cherry Orchard.  The action in Vanya & Sonia & Masha & Spike takes place in the siblings' childhood abode, which Masha has decided to sell, much to Vanya and Sonia's dismay.  With her acting roles and therefore her income drying up, Masha feels she can no longer afford the upkeep.  The need to dispose of the beloved family estate is a recurrent scenario in Chekhov's plays, stemming from his own personal trauma of losing his home due to his father's bankruptcy.

Despite all the Chekhov influences, Durang's play is totally different in tone.  While Durang mirrors and even acknowledges many of Chekhov's grim, depressing plots and themes, he plays them for laughs.  Sonia and Vanya's pathetic existences are reflected in their wardrobe (Birkenstock sandals and socks) and the fact that the highlight of Sonia's day is bringing Vanya his morning coffee.  When Sonia laments "I had bad dreams .. I dreamt that I was 52 and I wasn't married", Vanya retorts "Were you dreaming in documentary form?"¹  And when Vanya suggested Sonia take medication for her depression, she quips "If everyone took antidepressants, Chekhov would have had nothing to write about".¹

The humour is ramped up as the siblings bicker over which costumes they will wear to a masquerade party that Masha is invited to.  Masha wants to go as Snow White and insists that Spike be Prince Charming and the others dress up as dwarfs in support of her costume.  Sonia rebels and instead, dresses up as "the beautiful Evil Queen as played by Maggie Smith".  She then proceeds to spend the next several acts of the play doing a Maggie Smith impression.

The role of mystic soothsayer Cassandra is played entirely for laughs with her weird premonitions such as "Beware the middle of the month", "Beware of Greeks bearing gifts" and "Beware of Hootie Pie"¹, a mysterious prediction that becomes meaningful towards the end of the play.  In order to change Masha's mind about selling the house, Cassandra practices voodoo, sticking pins in a doll clad in a Snow White costume, which causes Masha to inexplicably shriek in pain.

Throughout the play, various characters look out the window in wait for the return of a blue heron who occasionally graces the pond.  The heron, which might be a symbol of hope or fulfillment, never actually appears during the play.  These interactions seem to channel "Waiting for Godot", who also never comes.

Vanya & Sonia & Masha and Spike played on Broadway starring David Hyde Pierce and Sigourney Weaver as Vanya and Masha.  It was nominated for six Tony awards in 2013, winning the top honour of Best Play that year.  The acting in the Canadian production is excellent, especially by the three lead actors.  Fiona Reid's portrayal of Sonia's incessant whining could have been annoying, but instead comes across as pathetically endearing, so that we feel for her at the same time that we are laughing at her. Jennifer Dale perfectly conveys the vulnerability and self-doubt behind Masha's veneer of arrogance and narcissism.  Steven Sutcliffe, as Vanya, delivers an incredible monologue/diatribe that goes on interminably for about 5 minutes, spouting his fear of change (be it in climate, technology, or social mores).  Instead of sending texts or emails, he longs for the days when "WE USED TO LICK POSTAGE STAMPS".¹


Durang has written a funny, intellectual play that can be appreciated at face value, but reaches another level when all the Chekhov references are recognized.


¹Quotes from Vanya & Sonia & Masha & Spike by Christopher Durang
Posted by A.R. English at 10:56 PM No comments: Links to this post