Feeding my life-long love of musical theatre, I have seen innumerable live musical performances over the years, mostly in Toronto but also a few on Broadway and in London's West End.  It has gotten to the point where I have watched some of the old standbys, such as Man of La Mancha, Fiddler on the Roof or Les Miserables, so many times that I am reluctant to spend more time or money to revisit them again.  It is therefore particularly thrilling for me when I get an opportunity to enjoy a new (for me anyways) musical that I have not seen before. 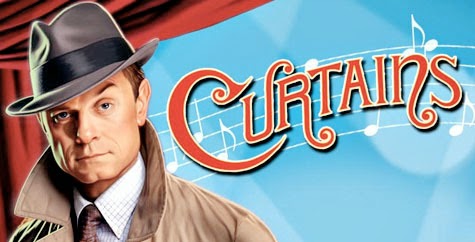 Recently, I watched the musical Curtains for the first time.  Curtains was nominated for multiple Tony Awards in 2007, with David Hyde Pierce (of TV show "Frasier" fame) winning the prize for best actor.  It was written by Kander and Ebb, the duo better known for the iconic musicals Chicago and Cabaret. 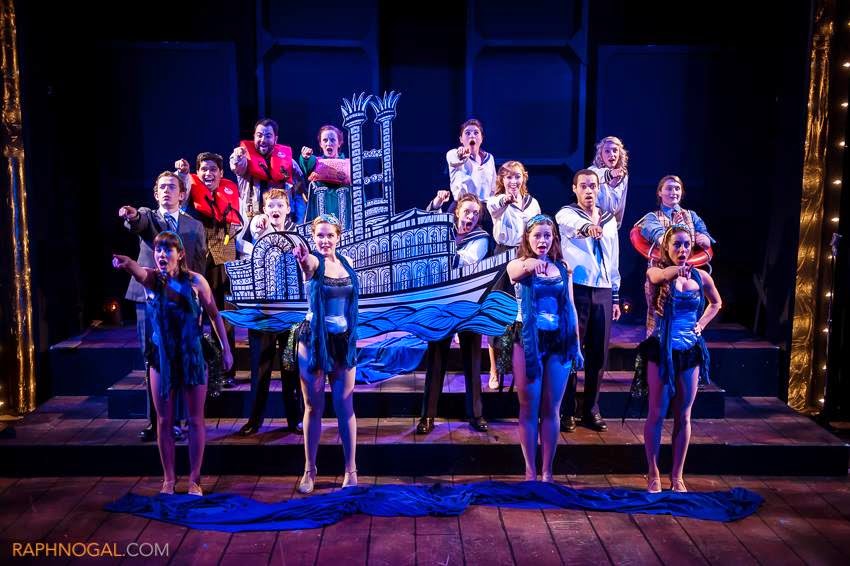 **
Curtains is a musical comedy set in an off-Broadway theatre where the talentless leading lady of a musical Western called "Robbing Hood of the Old West" is murdered during the opening night curtain call.  The entire cast and crew of the show are considered suspects, as police detective Frank Cioffi arrives to investigate.  He is distracted by his own fascination with musical theatre and his admiration for the performers, taking a particular shine to young ingénue Nikki Harris.

In considering the musical numbers for Curtains, the songs for the "show within a show" (Robbin' Hood) seemed relatively weak and mundane, possibly deliberately so, since that show was supposed to be a flop.  By contrast, the songs that dealt with the interactions of the theatre company behind the scenes, including the fallout of the murder and subsequent investigation, were witty, humorous, touching and inspired. **
In my favourite song, "What Kind of Man", the producer, song writers and major investor of the show lamented the scorching reviews they received, lambasting the critics by asking "What kind of man would want a job like that? Who could be jerk enough?  Hard up for work enough?  To want a job like that?"  Then when they suddenly found a favourable review, the refrain hilariously switched to "What kind of genius has a mind like that?".  The lyrics of this song come closest to matching the verbal gymnastics of Stephen Sondheim, by using and rhyming with words like "excoriated" and "perspicacious".  I was amazed that the singers could actually enunciate these big words in tempo. 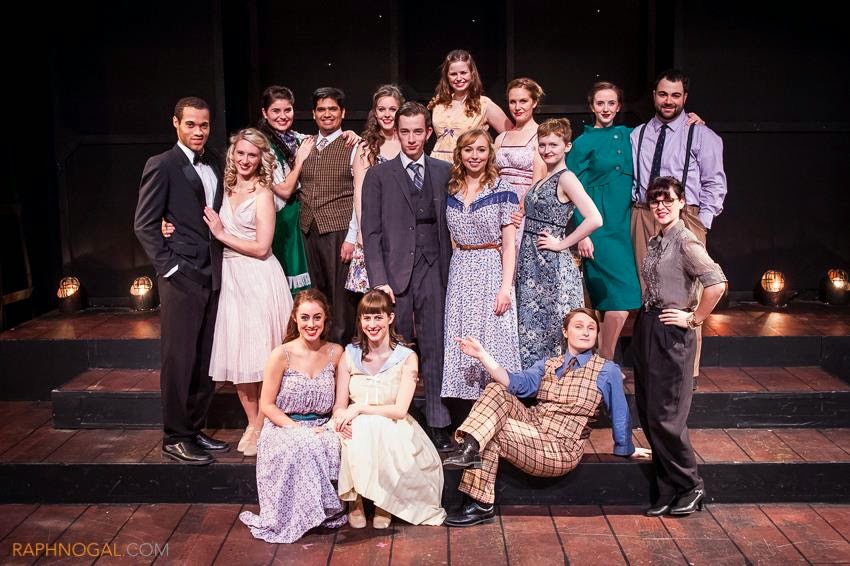 **
The rendition of Curtains which I watched was mounted by the 2014 graduating class of the Randolph Academy for the Performing Arts, a non-profit institution providing "Triple Threat" performing arts training in singing, dancing and acting.  Judging by the stellar triple threat performances across the board by the cast of Curtains, the Randolph Academy has fostered a batch of future theatre stars.  In particular, I was impressed by the vocal and acting abilities of Tyler East who played Detective Frank Cioffi, Avery Dupuis and Luis daSilva who played songwriters and ex-spouses Georgia Hendricks and Aaron Fox, and Lindsay Frederick who played Producer Carmen Bernstein. 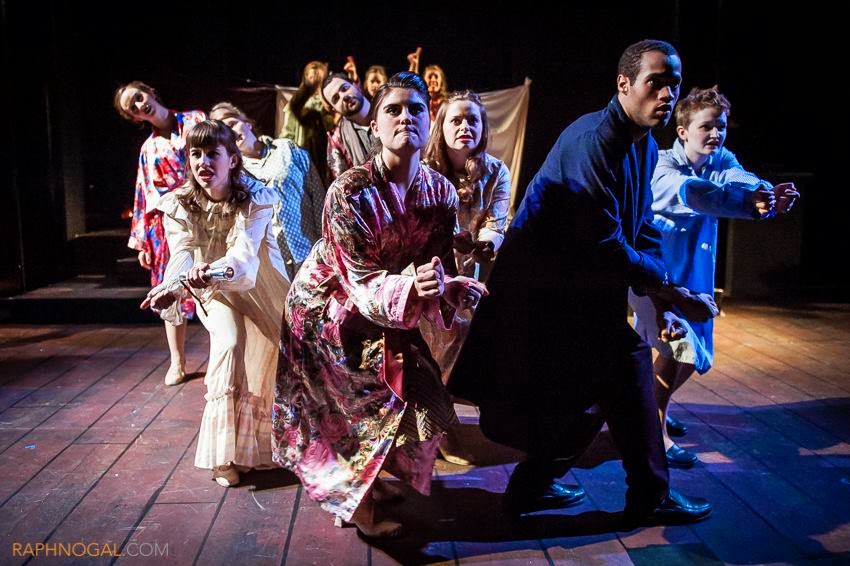 **
There were some interesting staging choices for this show, especially in the song "He Did It".  The detective  had sequestered the cast in order to conduct his investigation, resulting in them all sleeping overnight in the theatre.  With the stage dimly lit, various cast members tiptoed around in their pajamas and made guesses as to who was the murderer, eventually singing in tandem "He did it ... She did it ... They did it ... I'm sure!".  Behind them, linen sheets were hung vertically from a string to represent beds.  The remaining cast members peeked their heads out from behind the sheets, shining flashlights onto their faces to create an eerie effect like that of a camper telling a ghost story by a camp fire.  It definitely set the right mood for the song.

The musical accompaniment was provided by an on-stage band that consisted of two pianists and a percussionist.  In several scenes within Curtains, songwriter Aaron Fox wheeled out a piano and tried to compose a song.  While he actually played a few bars on his piano, the actual music was coming from the band's pianos.  This is very similar staging to the musical Marry Me A Little which played at the Tarragon theatre.

**
The Randolph Academy's version of Curtains ended with a final encore where the cast re-purposed a refrain from the song "Show People".  The audience was encouraged to pass on their "show programs" and spread the word about the show, but were cautioned not to give away the ending or "It May Be Curtains .. For You!".  This reprise provided the perfect ending for the show and I wonder if it was improvised specifically by this group, since I have not found mention of it in the cast recording, synopsis or any write-ups about the musical.

Curtains was a delightful and entertaining show to add to my long list of musical theatre viewing pleasures.  It had many memorable songs, an interesting plot, and some corny jokes and clever puns that were delivered with aplomb and great comedic timing by the group of very talented young actors.  In addition to the performances, this was a very professionally mounted production with excellent costumes, sets, lighting and musical accompaniment.  I look forward to watching more productions by the alumni of the Randolph Academy of Performing Arts.

**Special thanks to Raph Nogal Photography for allowing the use of his beautiful photographs of the Randolph Academy production of Curtains.
Posted by A.R. English at 10:41 PM No comments: Links to this post