It takes effort to embrace some of the works of Stephen Sondheim, since his themes, concepts, musical scores and lyrics are sometimes too sophisticated, different or just down-right weird to be appreciated by the general audience.  One thing that can definitely be said about the extremely prolific composer is that he is never repetitive and he does not settle for the normal tropes of musical theatre.  Very seldom is the typical romantic "boy meets girl" storyline used as the central plot of a Sondheim musical, and "Happily Ever After" rarely seems to be part of his vocabulary.  Instead Sondheim is always searching for the next new twist.  His eclectic body of work includes an operatic kabuki-styled show set in 19th century Japan, a story that is told backwards chronologically, a story-less series of vignettes about relationships and commitment that brought the "concept musical" into the mainstream, and a musical inspired by a famous 19th century painting where the first half of the show magically brings the painting to life.

Sondheim's 1990 musical Assassins is no less ambitious in terms of theme or music.  The titular characters are nine would-be assassins of US Presidents spanning over 100 years from John Wilkes Booth who assassinated Abraham Lincoln in 1865 for political reasons to John Hinkley Jr. who tried to kill Ronald Reagan in 1981 in order to appear important to then child actress Jodie Foster.  In addition to Booth, three others successfully accomplished their goals—Charles Guiteau killed James Garfield in 1881, Leon Czolgosz shot William McKinley in 1901 and of course, Lee Harvey Oswald assassinated John F. Kennedy in 1963.  The show also features four other unsuccessful assassination attempts, made by Giuseppe Zangara (Franklin D. Roosevelt 1933), Samuel Byck (Richard Nixon 1974), and the pair of Lynette "Squeaky" Fromme and Sara Jane Moore, who each made separate attempts on Gerald Ford in 1975.  Assassins the Musical explores the back-stories of these down-and-out losers  and the motivations that propelled them to commit these brazen and heinous acts, all in warped pursuit of the "American Dream".  In an interesting twist, all these assassins from different time periods interact throughout the show, goading, commiserating with and feeding off of each other.

We watched a production of Assassins put on by U of T's Victoria College Drama Society.  The musical opens to the backdrop of a carnival scene, where a red and white pin-striped barker encourages passersby to "C'mon and shoot a President" to win a prize. The prize could be recognition and infamy, a regained sense of purpose or accomplishment, revenge or justice depending on the perpetrator.  One by one, the assassins enter the scene and the barker provides a gun to each of Czolgosz, Hinkley, Guiteau, Byck, Zangara, Fromme and Moore.  Then John Wilkes Booth arrives and is revered as the "pioneer" who set the precedence for everyone else by being the first to successfully kill a President.  By the end of the song, the entire group is singing the titular line of the song "Everybody's Got the Right to Dream".

The show proceeds to delve deeper into the psyche and motivations of the assassins.  In particular, the three successful ones (Booth, Czologosz, and Guiteau) each gets his own ballad, sung in story-telling fashion by an anonymous "balladeer".  Sondheim made a point of writing each of these songs as a pastiche, mimicking the music of the era of each assassin.  Hinkley and Fromme sing a duet "Not Worthy of Your Love" each declaring devotion to the object of his/her obsession--Jodie Foster and Charles Manson respectively.  Based on just to the melody, this sounds like a traditional romantic love song contradicted by lyrics that convey a chilling psychotic infatuation—"Tell me how I can earn your love".  Zangara's song is interesting because it is not told from his point of view and it does not describe the attempted shooting of Franklin D. Roosevelt.  Eschewing exposition, Sondheim instead writes a song about the reactions and aftermath of the shooting, sung by five witnesses who each claimed to have played a part in "saving" Roosevelt by interrupting or distracting him as he stood on a chair in a crowd aiming his gun at the President.  Sara Jane Moore's character is played mostly for comedic effect with her bravado and bumbling clumsiness with her gun.  Dressed like a suburban soccer mom, she even brings her child and dog to an attempted assassination.  Byck spends the show dressed like Santa Claus in reference to an outfit that he wore during a political protest.  Instead of a song, he is given several verbal rants reflecting actual attempts that he made to contact public figures including Leonard Bernstein.  Watching this show really gives you a great lesson in a sordid part of American History.

By now the show is almost over and we were wondering what happened to the most infamous assassin of recent history, Lee Harvey Oswald?  Apparently this was a deliberate and debated choice by Sondheim and his co-creators.  Originally Oswald was to appear in the opening with the others but it was suggested to Sondheim that it would be more impactful to save him for the finale.   The musical has undergone a few iterations since its inception.  While it was not originally the case, in the version that we watched, the innocent, fresh-faced looking balladeer turned into the character of Lee Harvey Oswald.  It was a bit shocking and maybe points to the adage that you can't really judge a book by its cover.  Oswald appears as a depressed and confused young man who originally intended to kill himself.  Instead he is urged by the other assassins to shoot JFK as a means of validating their joint purpose—"With your act, we are revived and given meaning... People will hate you with a passion.  Imagine people having passionate feelings about Lee Harvey Oswald!! ..".  The powerful song "Something Just Broke" again does not directly refer to the assassination but instead soulfully portrays the feelings of the Nation after losing their President. 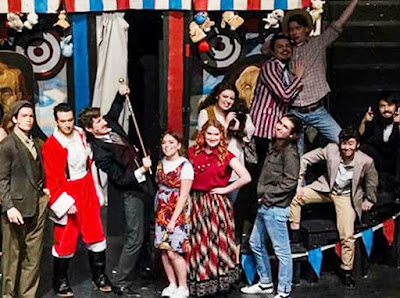 When we first saw the group of young actors who would play these historic roles in Assassins, I was worried about whether or not they could pull it off and make me forget that they were students acting in a musical.  In particular, the two performers who played Zangara and Guiteau looked like they were barely out of grade school with Guiteau wearing the most obviously fake beard that I have ever seen.  But once the show started, this talented group sucked you into the story with strong acting and singing abilities. I particularly enjoyed the comedic timing of the actress playing Sara Jane Moore, who was goofy, endearing and hilarious.  I was very impressed with the quality of the show, especially with the sound system and musical accompaniment.  Often in these community-theatre type performances, the sound quality is poor and you cannot hear what is being said.  In this case, it was actually the opposite where it sometimes felt like the performers were shouting and the volume got too loud.

As usual, Stephen Sondheim created an innovative musical unique not only from what any other composer has written, but also different from any of his own works.  His creative songs span many styles within the same show and integrate in an interesting fashion with John Weidman's book.  Even though it took a bit of historical homework for me to fully appreciate the musical Assassins, this was an enjoyable experience for me.
Posted by A.R. English at 7:30 AM No comments: Links to this post

Theatre: The Bodyguard The Musical

When a mediocre "B-movie" known more for its phenomenal soundtrack than its plot or acting is turned into a live musical, it is not surprising that the resultant stage show exhibits similar traits.  The Bodyguard Musical, which originated in London's West End follows a similar story-line to the 1992 Kevin Costner/Whitney Houston film with a few minor changes.  Former secret service agent Frank Farmer reluctantly agrees to become the personal bodyguard for superstar singing diva Rachel Marron, who is being harassed with threatening notes from an unknown stalker.  Following the typical romantic movie cliches, Frank and Rachel initially dislike each other but eventually fall in love, only to be torn apart by their different worlds and Frank's need to stay detached in order to effectively protect Rachel and her young son Fletcher.

As expected, the musical features stellar singing from the two female leads who play Rachel and her sister Nicki, doing justice to the slew of movie soundtrack songs such as "Run to You", "I Have Nothing", and the signature "I Will Always Love You", augmented with other Whitney Houston hits including "Saving All My Love For You" and "I Want to Dance With Somebody".  But for me, this was not a true musical but rather a melodrama interspersed with various characters singing Whitney Houston songs for a variety of reasons.  I much prefer the sung-through musical where all "dialogue" is sung as opposed to spoken, or at very least, a musical where songs are written specifically for the show and the lyrics advance the plot.

I felt very little chemistry between Frank and Rachel, making their sudden romance abrupt and unbelievable.  There seemed to be a stronger connection between Frank and Nicki, making me wonder for a moment whether the plot intended to stray completely from the movie.  That might actually have been interesting, but no such luck.  Even so, the excellent voices of the female stars would have made this musical sufficiently entertaining for me, had it not been for the extremely cheesy staging.  This included the use of strobe lighting, smoke and fog, and clumsy use of slo-motion with sound effects reminiscent of the TV show The Six Million Dollar Man.  The climatic scene in the first act where Frank rescues Rachel from a mob scene by sweeping her up in his arms was done in such a corny fashion that I actually gasped and then laughed out loud.  And the final climatic scene in the last act happened so quickly (even though the goofy slo-mo effect was used once again) that I almost missed it.  Each dramatic sequence seemed almost incidental other than being used as a bridge between another Whitney Houston song.  A final onscreen video showing flashback scenes from Frank and Rachel's "romance" felt cringe-inducingly awkward.  It was obviously added in order to allow the Rachel character enough time to make a costume change in preparation for her eleven O'Clock number "I Will Aways Love You", which she sang while covered with swirling fog(?!?) 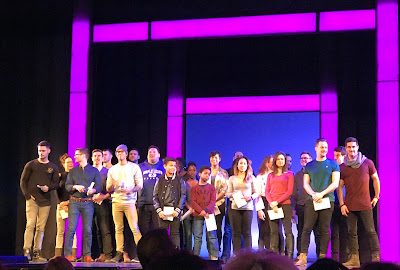 If you are a big fan of Houston's music or The Bodyguard movie or just want to appreciate this show for the singing, then you may love it, as many people actually do.  For me, I prefer to watch a real musical with non-generic songs written so as to be integral to a good story.  I guess others agreed with me, since there were many empty seats on the night that we attended this show (which is part of our Mirvish subscription series).  In fact, a special "sing-a-long" event featuring the cast of The Bodyguard was hosted as a marketing promotion that gave away free tickets to the show for each attendee.  You don't see such gimmicks needed for Come From Away.
Posted by A.R. English at 10:18 PM No comments: Links to this post