Each year during the entire month of May (and into June for some exhibits), the Scotiabank Contact Photography Festival is held throughout downtown Toronto, displaying photographic works in art galleries, museums, restaurants, coffee shops, stores and even on exterior walls of buildings.  One of the biggest concentration of locations hosting this event can be found along Queen and King Streets from Spadina Ave. to Gladstone Ave. and this was the area that we concentrated on while partaking in this festival.  Below are descriptions of some of the highlights of our tour.

The most interesting exhibit was called Cutlines, which is held in the currently vacated and soon-to-be-demolished Globe and Mail Press Hall.  The exhibit consists of a selection of 175 Cold War-era (1940s-1990s) photos from the Globe and Mail Archives out of a possible 750,000 print images still in storage.  Unfortunately due to the shift to technology and digital images in the declining newspaper industry, the majority of these historic gems may eventually be destroyed.  When I first saw the photos and noticed the bright orange "cropping" lines drawn on them, I initially thought that the term "cutline" referred to them.  In fact, the term actually refers to the captions or words that the photographer writes on the back of a photo, giving newspaper editors initial indication of what he was trying to capture.

Especially fascinating about this exhibit was the illustration of manual photo-processing techniques that we have since taken for granted in our post-Photoshop world.  This included the physical markings on the images to indicate desired cropping, the highlighting or outlining of various parts of the photo to make them pop (see the creases and collar of the man's suit jacket), and a technique called "rubylith" which uses a type of masking film to transform part of the image into an reddish-orange colour.

Some photos used airbrushing techniques to eliminate unwanted portions of a photo.  In keeping with the Globe and Mail's policy of not printing "sensationalized" images, the 1948 photo of gunned-down robber was requested to be cropped and airbrushed to remove his body and only show the safe that he was trying to crack.  You can see the line drawn on the image and the word "Out" written on it.  Another photo looked like "white-out" or "liquid paper" was applied to obscure whatever was in the background, behind the group of people in the foreground.  One photography technique which we learned from this display was to ask the subject to point at something, in order to put them at ease and allow the pose to appear more natural. 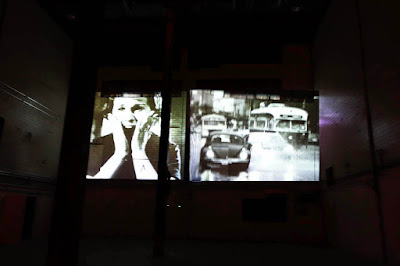 In addition to the print photos displayed in the glass cases, there were also digitized images broadcast on the walls of the old building.  Shot after shot appeared, providing a glimpse into Toronto's recent past.  Following our tour of the Globe and Mail Press Archives, we headed towards 401 Richmond, a complex that contains multiple art galleries, several of them participating in the Contact Photography Exhibit.

The Red Head Gallery had a fascinating exhibit by Gabrielle de Montmollin called "We Shall See What We Shall See" which depicts Canadian images in "lenticular" style by layering 3 photos on top of each other so that the image shifts and transforms as you move across it and view it from left to right.  The majority of the photos deal with Jian Ghomeshi and his court trial.  An image of Ghomeshi in a suit entering the courthouse morphs into a fashion photo of a man choking a woman.  The image of "Big Ears Teddy" morphs into the words "Big Ears Teddy should not see this".

Another gallery had an exhibit called "Jane at Home" which might have been on display in conjunction with the "Jane's Walks" weekend since it was a museum of photos and artifacts in tribute of journalist, author and activist Jane Jacobs.  In addition to photos of her in her Toronto home and with her children and grandchildren, we saw a recreation of her study and writing desk, as well as personal items such as her iconic glasses and a "hearing horn", the sight of which mostly caused people to speak louder as opposed to actually amplifying the voices.
Posted by A.R. English at 2:55 AM No comments: Links to this post