When our 2017/18 Mirvish Theatre subscription included the hit musical Come From Away for the second time (it was also in the 2016/17 season), those who did not want to watch it again were given the option to pick another show from Mirvish's list of bonus (non-subscription) shows.  Most of these shows were repeats of past musicals such as Motown the Musical, Phantom of the Opera and Chicago, which we were not interested in watching again.  The one new musical in this list was a jukebox musical called Bat Out of Hell, using the songs from the iconic album of the same name by  Meat Loaf.  But like many jukebox musicals of the past, Bat Out of Hell cobbled together a nonsensical story line as an weak excuse to belt out songs from the album, without any thought about whether or not the lyrics of the songs advanced the plot.  This was not an optimal option for us either.

Instead, we had our eye on a show which was part of the "Off-Mirvish" subscription series.  It was the musical Fun Home, which won five Tony Awards in 2015 including best musical, best lead actor, best book, best original score and best musical direction.  The musical is based on the award-winning autobiographical graphic novel "Fun Home: A Family Tragicomic" by cartoonist Alison Bechdel.  It deals with her childhood and coming of age while growing up in the familial house/funeral home with her parents and two younger brothers, coming out as a lesbian while at college, discovering that her father Bruce was a closeted gay man who preyed on teen-aged boys, and his death shortly afterwards, possibly by suicide.  Like the graphic novel, the story in the musical is told in a non-linear fashion, using three different actresses to portray Alison at different stages of her life.  The musical opens with 43-year-old "big" Alison reminiscing about her past as she tries to document her memories in drawings for her comics and she acts as narrator and commentator throughout the show.  The next few scenes feature "small" Alison at age 10, innocent, exuberant, intelligent and already aware that she did not relate to "girly" clothes or activities.  Away at college at 19, "medium" Alison realizes and embraces her sexual orientation, coming out to her parents and starting her first lesbian relationship. 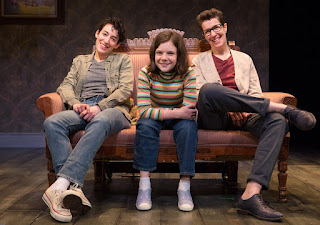 * Photo by CYLLA VON TIEDEMANN
The three actresses that play Alison at the various ages are all stellar, as are the rest of the cast.  But the one that really stands out is Hannah Levinson who plays small Alison. Levinson not only has a powerhouse singing voice for such a small body.  Her acting ability is outstanding as she navigates through both light-hearted and dramatic moments with equal aplomb.  In the song "Ring of Keys", small Alison spots a butch-looking lesbian for the first time and is filled with wonderment and excitement and the inexplicable kinship that she feels with the woman, ending with the perfect delivery of the song's final lyrics "...I know you".  Medium Alison, played by Sara Farb, also has a memorable moment during her big song "Changing My Major" which she sings after her first sexual encounter with Joan, who would become her girlfriend. Farb conveys the whirlwind of emotions that Alison is feeling, ranging from giddy joy to awkward embarrassment, in a performance that is both funny and endearing.

While the overall plot of Fun Home is dark and heart-wrenching, the musical intersperses a few cheery moments to lighten the mood.  The most uplifting is the humorously irreverent song "Come To The Fun Home", where small Alison and her brothers practice a commercial that they created to promote the family funeral business, which they nickname "Fun Home".  In the song "Raincoat of Love", in order to shut out the sounds of her parents fighting, small Alison imagines her family as members of a "Partridge Family"-esque group, singing about happiness and love.  Some of the characters in her fantasy are dressed in costumes like those worn by the TV singing group during their performances.  The lyrics and melody of Raincoat of Love seem to take inspiration from the Partridge Family songs "I Woke Up in Love This Morning" and "Having A Ball".  Much of the story focuses on Alison's relationship with her father Bruce, as well as his turmoil dealing with his closeted homosexuality, which he expresses in one of the last songs called "Edges of the World".  While that song was probably intended to be the eleven-o'clock number, the song that I found most heart-wrenching and powerful was the one sung by Alison's mother Helen.  In Days and Days, Helen (played by the fabulous Cynthia Dale) finally releases all of her repressed anger, sorrow, disappointment and shame over the years of living with and hiding Bruce's sordid secret.

After watching the live show, I read Alison Bechdel's graphic novel.  I found it quite interesting to see how the musical was so skillfully adapted from various vignettes in the comics book, sometimes creating a magnificent, poignant scene and song out of just a couple of cartoon panels.  Bechdel's extremely personal work helped her to work through her feelings about her father, while a follow-up graphic novel called "Are You My Mother" delves into her relationship with her mother, as well as all the psychotherapy that Alison has gone through in order to cope with her difficult family situation.

Fun Home is a groundbreaking musical that features a lesbian protagonist and a female duo who won the Tony award for best original score, both considered to be firsts.  This short, one-act show deftly encapsulates the essence of Bechdel's tragicomedy, feeling both personal and socially relevant at the same time.  I'm really glad that we chose this smaller, more intimate show based on original music, that was deep, powerful and very rewarding to watch.
Posted by A.R. English at 8:40 PM No comments: Links to this post