The Bata Shoe Museum is currently featuring an exhibit on the History of the Sneaker.  First developed in the late 1800s for casual and athletic wear, and originally called plimsoles, these shoes soon given the nickname " sneakers" since the quiet rubber soles allowed for people to sneak up on each other.   Early examples of sneakers were on display as well as information on the evolution of the sneaker design and its cultural and social impacts over time.

One series of sneakers, mostly from the 1980-90s, highlighted the attempts to add technology to the shoes in order to improve functionality or performance.   There were shoes that tried to use pegs to provide more shock absorption or air pumps to make them lighter and more springy.  Another had built-in pedometers that measured pace, distance and calorie intake–sounds useful but looks bulky and uncomfortable.  Yet another shoe took this to the next level by adding a computer chip and what looked like the end of a remote control to the heel, allowing the information to be synched with early Apple computers.  The shoe even came with software on a floppy disk and an instruction manual.

A very interesting video described the importance of both basketball and rap in the propulsion of the sneaker into cult status.  Although sneakers were designed for basketball as early as the 1920s, the fad really took off when superstar Michael Jordan signed a contract with Nike to wear shoes specially designed for him, dubbed  "Air Jordans".   Deemed illegal and non-conforming by the NBA, Jordan was fined $5000 each game for wearing the shoes.  The fine was more than gladly paid by Nike, since the controversy helped increase the popularity of the shoes and sales of them skyrocketed.  Other basketball stars followed with their own shoes as illustrated by the exhibit's inclusion of shoes from Patrick Ewing, Vince Carter, and Lebron James.

As sneakers became more of a style statement with America's youth, they would frequently change the colour of their laces to get a different look, since they could not afford multiple new pairs of shoes.  The influence of sneakers in the rap music culture was led largely by the group Run DMC, who took to wearing Adidas shoes without laces, as a tribute to prisoners who had their laces removed in jail so they could not hang themselves.

The highlight of the exhibit was the collection of rare and iconic shoes from the archives of various manufacturers.  Included were the shoes fashioned to resemble the designs of West Coast First Nation totem poles, ones inspired by socks worn by Russian astronauts, a hand-painted tribute to Heath Ledger as the Joker, and roller-boat shoes that had bright red soles and decorative gold spikes.

Who would have thought the lowly running shoe would have such a big impact on fashion, style and culture.  Free passes to the Bata Shoe Museum can be checked out from the Toronto Public Libraries.
Posted by A.R. English at 7:08 PM No comments: Links to this post

This year's Fringe Festival has been a very interesting experience, both in terms of the shows we saw, as well as some unexpected situations caused by the extreme rain storm that hit Toronto last week.  We were watching a play when the downpour started, and at one point, there was such a loud and disruptive roar of thunder that the actor actually ad-libbed a line in acknowledgement.  After the show, most of the audience were trapped by the unexpected deluge of rain and stood under the awning of the theatre for over 20 minutes before realizing that it was not about to subside any time soon.  That evening and the next day, multiple shows were cancelled due to power outages.  It is too bad that these events dampered the 25th anniversary of the Fringe Festival.

As with every year, picking Fringe shows to see is a bit of a gamble as you need to make your decision based on a very short synopsis.  Occasionally there are reviews or recommendations from previous runs of the show, but even then it is risky since we have found that we don't always agree with the ratings.  So as always, we picked some winners, some average shows and some we really didn't like at all.

My favourite show this year It's Always You: A Musical, but then I am always partial to musicals.  This show was unusual in that it featured a cast of well-known Canadian comedians including Sheila McCarthy (Little Mosque on a Prairie), Dan Redican (The Frantics, Kids in the Hall), and Shawn Thompson (Murdoch Mysteries).  It follows the lives of three friends, Elaine, Bill and Ted as shown through alternate realities.  In each reality, one of three possible pairings has occurred–either Elaine married Bill, Elaine married Ted, or she married neither, even though they both loved her.  Quick little sketch scenes depict their lives in each of these realities, with songs thrown in to emphasize the situations.  The comedic timing of these professionals were impeccable, as expected.  However, relatively unknown recent theatre graduate Madelaine Redican (any relation to Dan?) who had a small role playing the narrator/stage-hand actually stole the show with her charming, quirky and totally endearing performance.  Breaking the fourth wall, she talks directly to the audience to explain various plot points and admonishes the director for some of the sadder scenarios, championing for a happy ending.

Another highlight was the play I Hired A Contract Killer, based on a Finnish cult movie from 1990.  Depressed, Henri decides to kill himself but is unable to do it.  After several failed attempts, he decides to hire an assassin to do the job for him.  Shortly after the contract has been assigned, he meets and falls in love with a woman and no longer wants to die.  Unfortunately he is not able to contact the assassin to cancel the job.

What makes the play particularly unique and intriguing is the innovative staging.   The play simulates the watching of an old movie, with its use of hand held projectors and screens to show the movie's opening and closing credits.  A set of 8 supporting actors dressed in film-noir hats and trench coats take turns narrating the story, weaving around the stage and through the aisles in almost dance-like choreography.

Rather than using props and sets to represent the various scenes, the supporting cast physically contort and transform themselves into various set objects. This included the high beam that Henri tries to hang himself from, the gas oven where he unsuccessfully tries to asphixiate himself, and the taxi cab he rides en route to hire a contract killer.  All the sound effects are performed by the actors either via their voices or using "radio foley" techniques.

I watched clips of the original movie on YouTube after seeing the play and was really impressed by how closely the play followed both the plot, stylistic atmosphere and spirit of the movie. 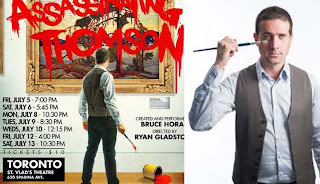 Assassinating Thomson was another unique experience that features Bruce Horak, who is legally blind, with only 9% vision in one eye, as a result of cancer tumours developed as a baby. In a totally personable, humorous and engaging manner, Horak describes his experiences growing up with his visual impairment, becoming an artist and actor.  He gives his impression of a "sighted man", explains the steps he took to learn to paint, tells of how he almost didn't get a role as an extra on the movie "Blindness" since he didn't act blind enough, and describes a touching last conversation with his dying father, who urged him to stop grieving what he had lost, but instead to celebrate the vision that still remains.

Given a commission to produce a historic perspective on Canadian artists, Horak started learning about Tom Thomson and the Group of Seven.   As the show continues, he begins to interweave his own personal stories with those of Thomson's, drawing many comparisons between their lives, including sharing the same birthday and similar interests in art, outdoors, camping, canoeing.

Horak then starts to divulge his research regarding various theories about Thomson's mysterious death in Algonquin Park's Canoe Lake in 1917, bringing up a range of possible suspects, including one man who coincidentally shared the same name as Horak's ex-girlfriend.  The theories and possible coverups ranged from plausible to outlandish and bizzare.

Throughout his delivery of an already engrossing monologue, he simultaneously attempted to "paint of portrait" of the audience, adding an extra dimension to the play.  As he spoke, he often peered into the crowd, as if to focus on various aspects of individuals and then returned to the canvas to "paint what he saw".  After a while, you forget that he can't actually see any of us.  At the end of the show, when he reviewed his creation, we were given insight into how Bruce Horak perceived us from that distance–as a mass of colours, lights and shadows.  It was interesting later to view his actual works including a collection called "The Way I See It - Paintings and Portraits". 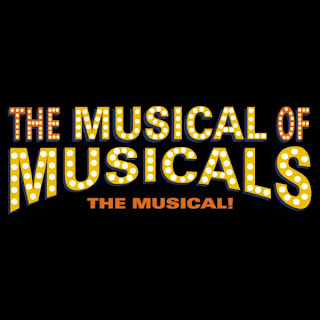 The show that I wanted to see most, called The Musical of Musicals, was unfortunately cancelled by the rain storm and it was just about impossible to get into any subsequent showings due to the now pent-up demand.  It is a retelling of the story of Rent (we can't pay the rent), retold in parody multiple times in the musical styles of other iconic musicals such as Oklahoma, The King and I, Sweeney Todd, Hello Dolly, Evita, Chicago and Cabaret.

Luckily, at the end of the Fringe Festival, there is one last chance to see the "Patron's Pick" at each theatre.  At each main venue, an extra performance is held on the final evening of the festival, for the show that generated the most attendence and buzz.  The Musical of Musicals was selected as one of the Patron's Pick.  We've scored tickets for this and I am so excited.  I'm expecting this to become my new favourite show for this year's Fringe Festival.  In the words of Cole Porter's Anything Goes, as a lover of musicals, "Who could ask for anything more?!?!"
Posted by A.R. English at 8:13 PM No comments: Links to this post