I love director Richard Linklater's "Before" series (Before Sunrise, Before Sunset, Before Midnight) which introduces a young couple in their 20s who have a chance meeting on a train, and then revisits their lives and relationships ten years later, and again ten years after that.  Ethan Hawke and Julie Delpy were in their 20s when filming Before Sunrise and aged real-time with their characters in each subsequent movie.

Linklater's newly released movie, Boyhood, takes this concept to the next extreme.  With scenes filmed annually over a period of 12 years, Boyhood follows the life of Mason who ages (along with child actor Ellar Coltrane) from 5 through 18.  While films usually portray time lapses through makeup or use of different actors, in this case we watch this boy as he naturally ages and grows into a young man.  At the same time, the supporting cast including Ethan Hawke (obviously a favourite collaborator with Linklater) as the absentee father, Patricia Arquette as the single mother and Linklater's own daughter Lorelei as sister Samantha also appear throughout the movie and age year by year along side of Mason.

The concept would be merely gimmicky if Linklater was not such a strong writer of naturalistic dialogue, as he also proved in the "Before" series, which all featured lengthy conversations between the two protagonists. Boyhood provides glimpses of different stages of Mason's childhood, as you literally watch him grow up on film.  Sometimes the annual aging is so subtle that you only realize there has been a time-jump because Mason has a new hairstyle.

Based on previous family dramas, there were multiple points in the movie where one has been programmed to expect some sensational event such as a car crash, drug overdose, or teen pregnancy to occur.  There is none of that.  Other than a few episodes with drunken step-fathers, nothing overly dramatic happens.  And yet, despite a 2 hour and 45 minute running time, for some reason the movie is riveting and you are totally invested in the lives of this boy and his family.

The unique concept and directorial challenges in making this movie over such a long period of time make Linklater a favourite for Oscar contention, although its July release does seem a bit early for Oscar season.  Hopefully it will not be forgotten in the fall when the other challengers flood the theatres.
Posted by A.R. English at 11:24 PM 1 comment: Links to this post

This year we were away on vacation and missed the entire run of the Fringe Festival.  We did get home in time take part in "Best of Fringe", which features eight shows selected by a jury of producers and theatre critics as their favourites of the festival.  For the two weeks following Fringe, these shows are each given a second run of three performances at the Toronto Centre For The Arts Studio Theatre.  Tickets for the Best of Fringe shows are more expensive than Fringe, at $17.75 as opposed to the $12 during the festival, but at least we had a higher chance of enjoying these specially endorsed shows.  Of the five shows we watched, we really enjoyed three of them. 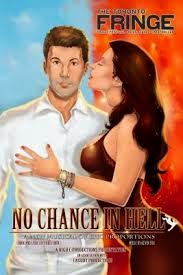 Our favourite show was "No Chance In Hell", a musical comedy about John Smith who was killed by his crazy girlfriend Chelsea and is now stuck between Heaven and Hell when the "file" on his life is misplaced. While waiting for the judgement on his final destination, he falls in love with Decadence, an envoy of the Devil, and decides to follow her back to Hell.  Once there, John re-encounters Chelsea, who is working for the Devil by creating a computer virus that will cause chaos to the systems in Heaven.  Their interaction provides one of the funniest song and dance numbers of the show, with the petite Chelsea literally flinging herself bodily at the much taller John.  Throw in a supporting cast that includes two angels dressed like gangsters in white suits and shades and a Devil wearing pajamas, a dressing gown and slippers, and hijinks ensue.  The angels try to lure John back to Heaven once they find his file, and John tries to stop the virus and rescue Decadence from Hell.   With an entertaining story, great songs with catchy tunes and good singers, No Chance in Hell is a fun show to watch. 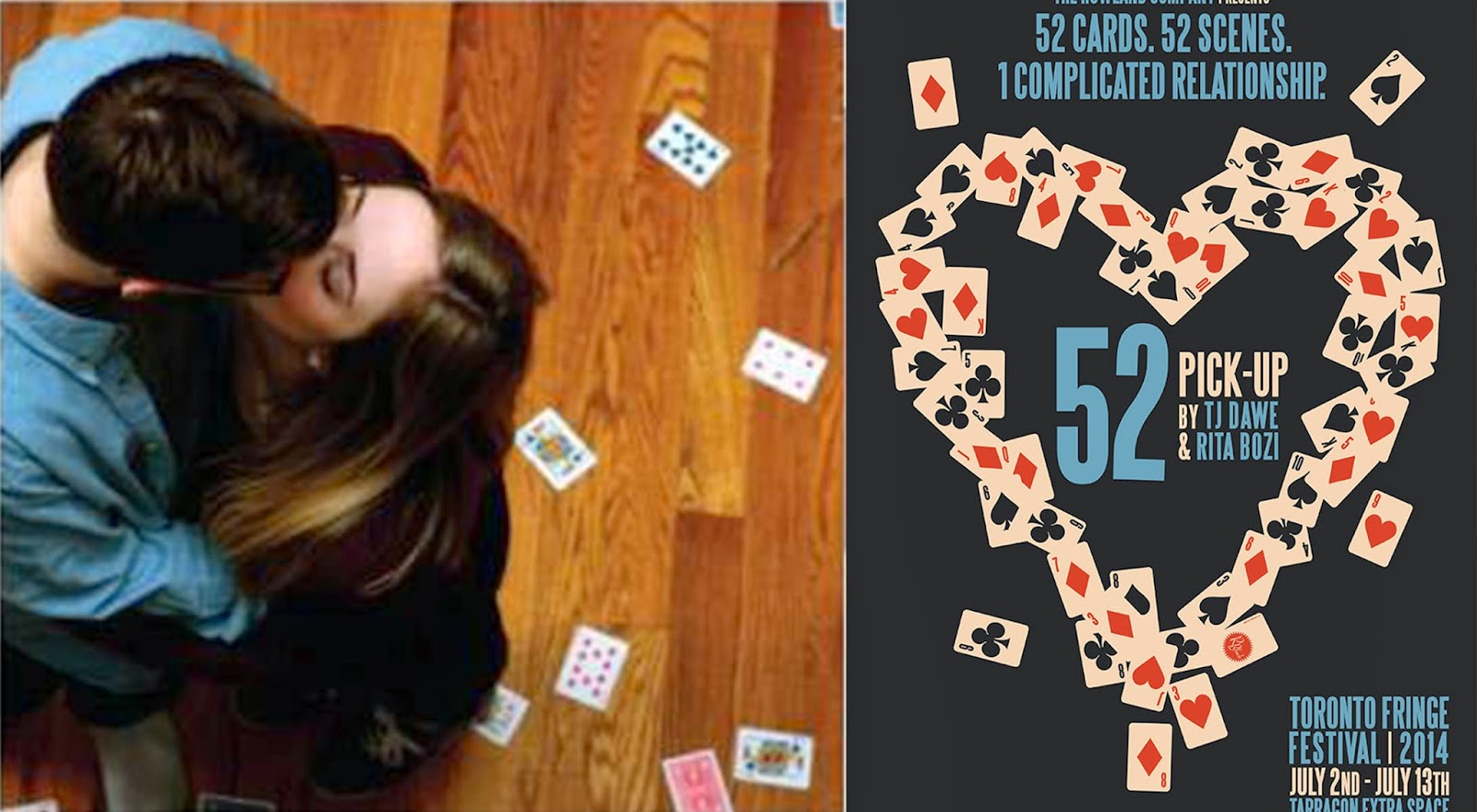 52 Pickup, the most popular show of this year's festival with a sold-out run,  lived up to its hype.  It has a very unique gimmick to trace the relationship of a couple from their "meet-cute" beginnings to their eventual breakup and separation.  The story is split into 52 short vignettes, ranging from a few quick lines to several minutes of dialogue.  The gimmick is that for each performance, the story is told in a random order, determined by the labels written on a deck of playing cards that are tossed in the air at the beginning of the show.  The pair of actors arbitrarily pick up one card at a time, read the label and play out that scene.

Despite the jumps in timeline, the story is still very easy to follow because the dialogue is so natural and the situations are so recognizable.  It takes very strong actors to be able to quickly switch emotions as they play out, in random order, the excitement of first meeting, the happiness of being in love, the mundane or annoying moments in a relationship, anger during arguments, sadness over their breakup and regret with a touch of nostalgia when they run into each other a year later.  Accentuating the universality of the story is the choice to have four pairs of actors take turns in different performances. There are two male/female pairings, one pairing with two men and one with two women.  One would presume that the exact dialogue might vary a bit with each pairing, but the overall themes remain the same.  This amount of variation makes for an exciting show that might be fun to watch more than once.  The play is co-written by Fringe Festival veteran T.J.Dawes, who also wrote a play that was adapted into the movie "The F Word" starring Daniel Radcliffe.

Emergency Monologues is another play that uses randomness to generate a different show for each performance.  Morgan Phillip Jones has accumulated many anecdotes over his career as an EMT (Emergency Medical Technician).  He decides which ones to share with the audience by spinning his "Wheel of Misfortune".  Jones is a very skilled storyteller and his narratives range from harrowing to hilarious.  Whether he is describing forgetting the stretcher on one of his first days on the job, or his experiences with one his supervisors who "worked at his own pace", or the incident with the "Penis Guy", his stories have you enthralled and on the edge of your seat.

I'm glad we were able to enjoy a bit of this year's Fringe Festival by watching a few shows at Best of Fringe.  Looking forward to the smaller Next Stage winter Fringe festival in January.
Posted by A.R. English at 9:27 PM No comments: Links to this post