Theatre: A Gentlemen's Guide to Love and Murder

A Gentlemen's Guide to Love and Murder is the 2014 Tony Awards Best Musical winner that is based on the 1949 movie "Kind Hearts and Coronets", which is in turn based on a 1907 novel.  Both the movie and the musical follow the same basic premise–a penniless man learns that his mother was disinherited and banished from an aristocratic family for marrying a "commoner beneath her station" and that he is 9th in line to inherit a family fortune and the title of Earl. Bent on revenge for how he and his mother were treated, he decides to bump off the 8 male and female heirs that stand in his way.  In the movie, a young Sir Alec Guinness plays the roles of all the family members in line of succession.  The same tradition is followed in the musical where the same actor plays each of the 6 male and 2 female heirs.  Each relative has a distinctively outlandish look and personality and many of the killings are carried out in a goofy manner. 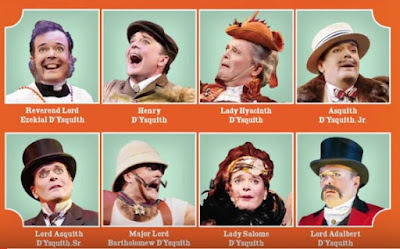 Kind Hearts and Coronets is a satirical black comedy while A Gentlemen's Guide is played more as an upbeat, joyous romp.  It is interesting to compare the differences between the two productions to see how this shift in tone was accomplished.  First, the name of the aristocratic family was changed from the prim and upper-crust sounding D'Ascoyne to much funnier name of D'Ysquith (which sounds like "Die, Squid" when they sing).  In the same vein, the protagonist is renamed from Louis Mazzini to Monty Navarro, and is made to seem more naively roguish and sympathetic in the musical than in the movie.

Even the methods of killing seem quirkier and less aggressive in the musical than the movie.  Whereas Louis Mazzini coldly and slightly menacingly poisons, bombs and shoots his victims (one at point blank range), Monty Navarro's killings are more passive and comical and often accompanied by a hilarious song.  He allows one relative to fall to his death by not lending a hand of support, cuts a hole in ice so that another falls through while skating, causes a third to be stung to death by a swarm of bees, influences a fourth to travel to dangerous lands, allows a fifth to be squashed by a bar bell while lifting weights and a sixth to accidentally shoot herself while acting in a play.  You are so busy laughing at the way Monty's plots play out that you find yourself rooting for him despite his murderous acts.


Both productions are told in flashback and much of the comedy stems from the use of a voice-over by Louis/Monty as he calmly, wryly and often ironically describes his thoughts and the results of his machinations.  Pretending to run out to "save" one of his victims, he dryly notes "needless to say, I was too late...").  A subplot involves Louis/Monty juggling two beautiful women, his mistress Sibella who married another for money instead of marrying him for love, and Edith/Phoebe, the wife/sister of one of his victims.  Whereas in Kind Hearts and Coronets, Sibella is cold and calculating and Edith is prim and inflexible, their counterparts in the musical are giddy, goofy and much more likeable.

A Gentlemen's Guide to Love and Murder boasts some excellent stagecraft and set design that add to the hilarity of the musical.  Unlike Louis in the movie, Monty does not pre-plan his first murder, but rather takes advantage of the situation at hand.  Reverend Lord Ezekial D'Ysquith takes Monty up to the church parapet to see the view and loses his balance as Monty refuses to help steady him.  Background video is used to show them climbing up the steeple stairs.  When the Reverend falls, the video spirals to simulate his plunge to the ground in a fashion very similar to the video used in Les Miserables when Javert commits suicide and falls into the river.  Similarly when Asquith D'Ysquith, Jr. plummets through the ice that Monty weakened by cutting a hole into it, a video shows the ice cracking along with the appropriate sound effects.

The best staging occurs during the highlight of the second act, which is the song "I've Decided to Marry You".  While Monty is romancing the married Sibella, Phoebe shows up unexpectedly to propose marriage.  Monty quickly hides Sibella in one room while wooing Phoebe in the other and accepting her proposal.  The open set design consisting of a set of doors held up by a frame, allows us to see what is happening in both "rooms" as Monty desperately tries to keep the two women apart and Sibella strains to hear what is going on.  What ensues is a spirited song and choreography as Monty sings "One in the parlor, one in the bedroom, nothing between them but me and a wall!"  I first saw a performance of this song at the 2014 Tony Awards and it immediately piqued my interest in watching the show.

The songs for A Gentlemen's Guide to Love and Murder have catchy tunes and witty lyrics.  My favourites include the opening numbers of the first and second acts, both sung by the chorus.  In "A Warning to the Audience", they caution that "This is a tale of revenge and retribution, so if you're smart, before we start, you'd best depart!".  Even funnier is the song "Why Are All the D'YSquiths Dying", where the mourners lament about having to attend so many funerals and end with the lines "Why are all the D'Ysquiths dying? Whoever's next, I swear I won't come back!  I'm utterly exhausted keeping track.  And most of all, I'm sick of wearing black!"
This show is so much fun that after watching it from our upper balcony seats as part of our Mirvish subscription, we decided to buy Dress Circle seats to watch it again.  When Lord Adalbert D'Ysquith sings the song "I Don't Understand The Poor", he points up to the people in the "cheap seats".  It felt nice on our second viewing, knowing that he was no longer referring to us!  We found that not only could we see better from the closer seats, but we could hear the lyrics better as well.
Posted by A.R. English at 10:16 PM No comments: Links to this post