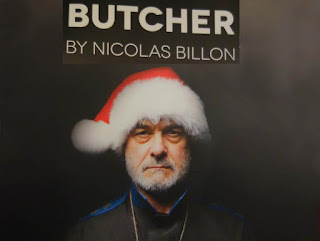 We were very excited to learn that French-Canadian playwright Nicolas Billon's new play Butcher was being performed at the Theatre Centre (1115 Queen St. West).  We loved Billon's previous work, Elephant Song, which was adapted for cinema as a taut, psychological mystery/thriller that screened at TIFF in 2014.  The description of  Butcher indicates that it is in the same vein.

Like Elephant Song, the plot of Butcher takes place on Christmas Eve, leading to much discussion about what Billon has against the holiday and why he sets such dark situations on what is normally considered a festival occasion.  All the action takes place in an isolated police station, where the lone cop on duty, Inspector Lamb, is interviewing British patent lawyer named Hamilton Barnes about his relationship to a disheveled old man, wearing a Santa hat and what looks like a military uniform.  Muttering some unintelligible Slavic-sounding language, the old man was dumped at the police station with a butcher's hook attached to his jacket and a note saying "Arrest Me" along with Barnes' business card pierced through the hook.  Unable to understand what the old man is saying and what connection he has to Barnes' (who denies knowing him), Lamb calls for a translator.  As the four characters interact and delve into the truth of the old man's identity, the tension is ratcheted up more and more and the you find yourself literally on the edge of your seat.  By the end of the show, you realize that nothing is as it initially seemed.

Without giving away too much of the plot, Butcher is about genocide, its victims and perpetrators, and the concept of justice vs. revenge vs. peace.  It was serendipitous that we picked a performance where a special post-show talk was to take place.  We had a lengthy chat and Q&A session with Nicolas Billon and several special guests about the conception and creation of the play.  When Billon first came up with the idea to write this story, he immediately decided that he did not want to base it on any actual genocide or group of people, as he did not want to be exploitive, but wanted to address the issue in general.

To achieve this, he invented a country called Lavinia (named after the daughter of Shakespeare's Titus Andronicus) and employed two Slavic linguistic experts to help him invent the "Lavinian language" which would have its basis on similar languages such as Slovenian, Bulgarian, Croatian, Bosnian, Serbian and Macedonian.  It was fascinating listening to Christina Kramer and Dragana Obradovic talk about their process of deriving the language.  They spoke of how they wanted the words to sound authentic with the right tones, textures and root origins, yet be opaque enough not to be recognizable as part of any real language.  Using this imaginary language to describe an imaginary genocide puts a bit of distance to the descriptions of the atrocities.

Billon uses this same concept in the staging of the play where any act of brutality is obscured, either happening at the back of the stage, blocked by an actor's back or partially concealed with darkened strobe lighting and a cacophony of piercing music.  He explains that this follows the tradition of Greek tragedies where the violence happens off-stage and is only described after the fact by a messenger.  Butcher is heavily influenced by the trilogy of Greek tragedies called Oresteia which also explores the concepts of vengeance versus justice and involves the Furies, the deities that avenge injustice.


The third special guest for the talk was Ellen Elias-Bursac, a former Yugoslav War crimes tribunal translator who talked about her experiences and observations during these trials which usually involved three judges.  She described the proximity of the victims and the accused, which caused much angst and occasionally led to recanting of testimony.  She indicated that the judges did not understand the language, so hearing the evidence through translators gave them a level of separation and isolation.  This seems similar to the effect that Billon was trying to achieve in his play.

Nicolas Billon spoke of a quote that he had heard, which stated that you could either have justice or peace but not both, because peace requires compromise while to achieve true justice, there is no compromise.  Butcher is a riveting play that explores these weighty issues as well as the cycle of violence.
Posted by A.R. English at 10:04 AM No comments: Links to this post