The Bakelite Masterpiece is an entertaining two-hander based on the true story of Dutch painter and forger Han van Meegeren, who was arrested after World War II for collaborating with the Nazis by selling them a Vermeer painting Christ With Adulteress, considered to be a Dutch national treasure.  The painting eventually came into the possession of Nazi leader Hermann Goring, who was in competition with Hitler to determine who had the best art collection.  Van Meegeren claimed he was innocent and had actually tricked the Nazis by selling them a forgery which he had personally created.  To prove his assertion, he painted a second "Vermeer" Jesus among the Doctors in court during his trial. 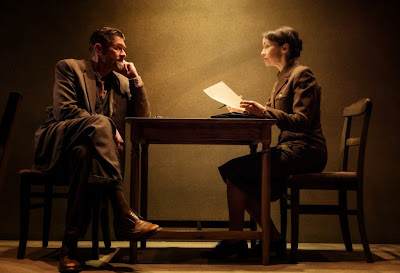 In adapting these events for the stage, playwright Kate Cayley started out with eight characters, but eventually reduced them down to two–van Meegeren and Geert Piller, a Jewish art historian turned Dutch prosecutor tasked with interrogating and eliciting a confession from the accused collaborator.   Having Piller's character personify the collective feelings of pain, loss, guilt and anger felt by the Dutch people also served to personalize the story.  Geert suffered her own tragedies during the Holocaust, so her quest for justice and retribution were as much personal as they were about fulfilling her public duty.  She also wanted a scapegoat to present to the Dutch people, so that they could heal and feel that vengeance had been served.  In her mind, the execution of van Meegeren would serve this purpose. 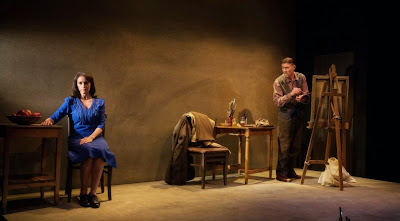 Piller was convinced that the Vermeer sold by van Meegeren to the Nazis was authentic, since she was present at the unveiling and wept at its beauty when she saw it.  She pontificated on what constituted art, what made a painting a "Vermeer" and how difficult it would be to replicate. Hans van Meegeren countered with chemical and technical explanations of how he faked the age of the painting.  Starting with a canvas from the same period, van Meegeren used the same badger hair paint brushes and mixed paints that matched those used by Vermeer.  He applied Bakelite plastic to harden the paint, baked the painting in an oven and rolled it with a cylinder to cause the paint to crack and appear aged.  Since in the play his original forgery was destroyed at the end of the war and could not be analyzed, he offered to paint a new "Vermeer" with Pillar as the model. 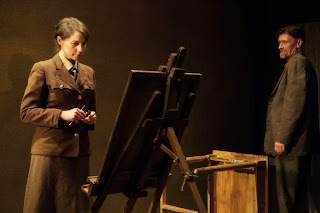 As with most two-hander plays, the power is in the dialogue and The Bakelite Masterpiece was no different (although Pillar provided some power moments of stillness and silence as well).  The sparring between the two protagonists grew more and more passionate as each revealed his true motivations, while the monologues were layered with double meanings. van Meegeren compared himself to Lucifer, trying to trick God (Goring? a strange analogy), to see if he could get away with it and to prove that he was as talented as the masters.  In describing the unrest of the Dutch people, Pillar spoke of women who prostituted themselves to the Nazis being punished by having their heads shaved in the town square.  Parallels seemed to be drawn between this scenario and the one depicted in the forged Vermeer, where Christ stared down the masses who wanted to stone the adulteress and said "He that is without sin among you, let him be the first to cast a stone".

The set design and lighting was very effective in supporting and providing the proper atmosphere for the plot.  The entire play took place within van Meegeren's cell, which was dimly lit and claustrophobic for the most part.  But when he positioned Pillar to sit at a table by a small window, the faint shaft of light resonating on her gave the feeling of a Vermeer painting.  At the beginning of the play, the objects of the set such as a table, chairs, easel and painting utensils were overturned and scattered across the stage.   As the plot progressed, van Meegeren would pick up the required pieces to proceed with the current scene.  So a table and two chairs were positioned for the interrogation scene, while the easel and paint supplies were retrieved when he prepared to paint.  By the end of the play, most of the set had been up-heaved again, bringing us full circle so that the original set arrangement now acted as a harbinger for things to come.

There was an interesting footnote towards the end of the play that implied van Meegeren's forgeries were not very good.  At the time, they were accepted because there were not many real Vermeers to compare against, the techniques for detecting forgery were less advanced, but most importantly, people wanted or even needed to believe.  Goring desperately wanted a Vermeer in his collection because Hitler had one in his. In the Talkback period after the show, the producers were asked what the actor playing van Meegeren actually painted on the canvas, since we never saw the results.  We now know the answer but were sworn to secrecy :)  They also discussed how various scenes and moments of transition were blocked as if for portraiture.  So it is like the entire play itself attempted to present itself like a painting.  One patron thought it was interesting that van Meegeren chose "Christ and the Adulteress" as the topic of his forgery, since there is debate as to whether the passage of text in the Bible describing this scene was itself a later interpretation–aka "a forgery".
Posted by A.R. English at 9:35 AM No comments: Links to this post