Douglas Coupland is a prolific novelist, designer and visual artist, whose works have been ubiquitous in Toronto even before his traveling exhibition "Everywhere is Anywhere is Anything is Everything" arrived for a 3 month stay.  Coupland's large public art structures can be found throughout the city, including the Red Canoe that overlooks Toronto skyline at Canoe Landing Park, and the colourful fishing floats by the waterfront nearby, the War of 1812 memorial near Fort York, and the windmill sculpture of houses located at the Shops of Don Mills. 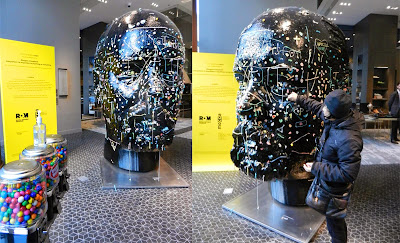 To prove the point that Douglas Coupland really is "Everywhere", the works from his exhibition were displayed in three separate locations–at the Royal Ontario Museum (ROM), Museum of Contemporary Canadian Art (MOCCA), and even in the entryway of Holt Renfrew Men, which hosted Coupland's "Gumhead" sculpture.  Visitors were invited to interact with and contribute to the enormous sculpture, a self-portrait of the artist's head, by adding coloured chewing gum to it.  Dispensers full of large jaw-breakers provided the contributory materials.  Over time, the sleek, black surface of the original sculpture was slowly covered with wads of chewed gum, some stuck on as blobs, some molded or stretched into shapes.  Putting aside the thoughts of how germ infested this piece was becoming, it was fun to be able to add your personalized stamp to this artwork.

Many of the exhibits installed at the ROM were word-based.  Coupland's floor to ceiling "word art" display called Slogans for the 21st Century featured pithy and thought-provoking sayings that seem to channel Marshal McLuhan–"I Miss My Pre-Internet Brain", "Sharing is Ownership for Losers", "We Live in the No Era era".  His Talking Sticks series used children's building blocks and letters to form confrontational words and phrases such as "Hostile Bid, 2Big2Fail, Red Herring".  Naming the totem-like structures after Aboriginal instruments of democracy gave deeper meaning to the interesting juxtaposition between the serious messages and the medium of the colourful toys.  In a section titled "Reading Corner", book covers of old classics were merged with a collage of letters forming words.  It was not clear whether the words were supposed to be reflective of the novels–"Wuthering Heights and RUMOURS, Lord Jim and GOD"?  In this same section, a library of Coupland's numerous books were on display including "Generation X: Tales for An Accelerated Culture, McJob and JPOD".

Some of the other works at the ROM included the wigs made to look like Andy Warhol's hair but pressed against glass like animal pelts, the art of Roy Litchenstein, and renderings of QR Codes which result in hidden messages such as "I Wait and I Wait and I Wait for God to Appear", when read through a QR Reader.  The Pop Head Series simulated black and white high school yearbook portraits but obscured the identities of the "students" with streaks of vibrant paint to produce the image of the "anonymous teenager".

Canadian Identity was a major theme of the works in the portion of the exhibition hosted at MOCCA.  A series of "still-life" photos depicted typical objects from various regions of Canada including lobster for the Maritimes, a Cowboy hat, toy tractor and hockey stick for the Prairies, and a polar bear, Inukshuk and fish for the Territories.  A large-scaled sculpture represented a transmission tower bent by the powerful ice storm of 1998.  Douglas Coupland produced abstract, simplified interpretations of iconic Canadian paintings such as Tom Thomson's Jack Pine and Lauren Harris' mountain scenes.  An entire wall full of nostalgic Canadiana included items such as a goalie mask, hockey trading cards, Labatt's beer cans, license plates from various provinces, a snow shoe, a can of Carnation's Evaporated Milk, and even Asian foods including a bag of Lobster flavoured chips like the ones I buy from T&T Grocery stores.

The display called 345 Modern House was comprised of 100 identical suburban homes made out of Lego, with the flat roof and carpark, inspired by Coupland's own west coast home.  At first glance, the black and red checkered pattern on the piece called Reservation Chair reminded me of the fictional brothers Bob and Doug Mackenzie, but the audio guide described a much deeper meaning.  A closer look revealed that the chair was divided into two sections where the tartan-patterned portion, representing Canadian Colonialism, was large and expansive.  Beside it, a tiny section too small to sit in was covered with grey and beige patterns of a First Nations group from Vancouver Island.  The proportions of the seating acted as a commentary on the marginalization of Indigenous peoples.  Douglas Coupland created a series of hutches, each depicting a piece of Canadian history.  The FLQ hutch included dynamite sticks and a small TV set, representing Coupland's memory, as a young child, of watching the funeral of Pierre Laporte.  The Terry Fox hutch contained road signs from Fox's heroic Marathon of Hope walk across Canada, and a cast of his leg, although a production error mistakenly created a right leg, while Fox's good leg was his left leg. Coupland turned this error into an opportunity to theorize that Terry's leg might have been saved if he had been diagnosed today, due to all the money raised for Cancer research.

Douglas Coupland's visual works are appealing enough from an pure aesthetics perspective, since they are usually bright, cheery and whimsical.  By understanding the deeper meanings that he tries to convey, it takes the appreciation of his art to a higher level.
Posted by A.R. English at 11:07 PM No comments: Links to this post