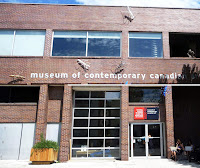 A recent exhibition at Museum of Canadian Contemporary Art (MOCCA) was called "This Is Paradise".  It was a retrospective of the Canadian artists from the 1980s that congregated in the emerging Queen St West art district.  Many of the collection of paintings, videos and multimedia installations focuses on art that was featured at The Cameron House, a bar, hotel and small theatre that was a favoured meeting place for Toronto's avant-garde artists, musicians,  actors and writers.  Also on display as part of this show were works from the National Gallery of Canada from the same 1980s era. 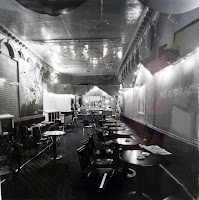 "This is Paradise" refers to a phrase that artist Tom Dean painted on one of the walls of The Cameron House where he roomed after being evicted from his studio.  It has been written that Dean meant this ironically given the grungy, seedy conditions on Queen St in the tumultuous 80s when AIDs, drug use and threat of nuclear warfare were the topics of the day.  But within the context of  Cameron House, perhaps he meant it sincerely, since this was a haven where he and fellow artists found a sanctuary that fostered their creativity.

One of the most striking set of paintings of this collection was Susan Meig's Purgatorio series, depicting bar drinkers in their own (metaphorical?) state of hell.

Rich like this cubism-influenced rendering of the band  Dogsound who played at Cameron House and other local bars.  I thought they looked like space aliens playing instruments. 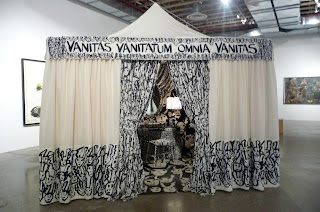 One curious installation in the middle of the room was this huge tent covered with oxymoronically creepy looking bunnies.  Inside there was a vanity table, mirror, stool and lamp all covered with the same bunnies.  Across the top of the tent were the words "Vanitas vanitatum omnia vanitas" which Wikipedia informs you is the Latin translation of a bible quote referring to "meaninglessness of earthly life and the transient nature of vanity".   How the bunnies fit in, I'm not quite sure!

Other interesting images included one of Lenin holding "The Joy of Cooking",  a cowboy hat made of rice crispies, and a photographic spoof on Andy Warhol's pop art, depicting a man naked except for a large can of campbell's soup covering his nether-regions. 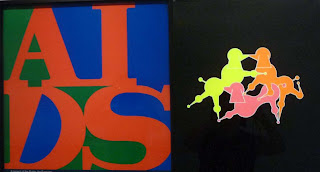 A section of the exhibition was devoted to "General Idea", a trio of artists who specialized in conceptual and media-based art.  Some of their most famous themes were represented, including an AIDS painting that was a homage to Robert Indiana's LOVE, and one of poodles "interacting" with each other.  A larger exhibition of their work is currently on display at the Art Gallery of Ontario (AGO) which will hopefully give me more insight into what this group was all about.