It still amazes and thrills me that Toronto is such a great city for cinephiles.  Not only is our city the host of the annual Toronto International Film Festival, but it is home to not one but multiple theatres dedicated to the screening of movies that may not be mainstream or first run.  The TIFF Bell Lightbox shows indie films, foreign films, classic films and has specially curated programming that feature a given director or topic (food in films, books in films, etc.).  The Bloor Hot Docs theatre specializes in screening documentaries and hosts its own Hot Docs Film Festival each spring.

This year, we attended the Hot Docs Film Festival for the first time.  I am usually leery about watching so many documentaries in a row, since I often find the subject matter of documentaries to be too depressing. While fictional movies can be sad, they don't hold a candle to real-life tragedies, made more poignant since they actually happened to real people around the world.  So we tried to pick movies with lighter subject matters.

We hit the jackpot with our first movie which was extremely funny and entertaining –To Be Takei.  The movie focuses on the life and career of George Takei and his decades-long relationship with his husband Brad, whom he married in Los Angeles in 2008, before Proposition 8 temporarily made gay marriage illegal.  George's name is pronounced ta-kay which rhymes with gay, not ta-ki which rhymes with eye, as he corrects several times in the movie as well as the Q&A

Takei's iconic role as Mr. Zulu in the original Star Trek TV series made him a aspiring role model for Asians like John Cho (the current Zulu in the new Star Trek movies) since there were very few minorities on TV at the time.  The role was all the more important since it did not portray Zulu with the typical Asian stereotypes in terms of makeup, dress or speech.

The mutual animosity between Takei and William Shatner is hilariously documented throughout the movie including a dispute about whether or not Shatner was invited to George and Brad's wedding.  Although Shatner originally claimed that he wasn't invited, in the movie he seems to imply that he didn't want to go because he "didn't know Takei that well, to which Takei retorted that after 3 years of TV and multiple movies together, how much more do you need to know someone.  Takei lambasted Shatner at a celebrity roast and later, gleefully revealed that he meant every word. 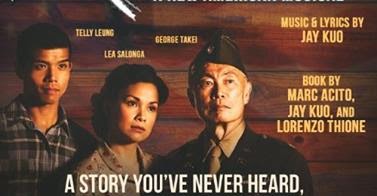 The movie delved into Takei's childhood, spent in Japanese American internment camps during World War II–an experience which resonated with him and motivates his passion for human rights and social justice.  George is headlining a Broadway-bound musical called Allegiance that is based on this dark period in American history.

In 2005, Takei officially "came out" and proceeded to take an active role as a gay rights activist.  He recently stepped into the Facebook and Twitter scenes and has become a social media darling, posting hilarious images, videos and comments on a regular basis.  In response to Tennessee's attempted "Don't Say Gay" bill which prevented teachers from discussing homosexuality in schools, George offered a solution–"Any time you need to say the word “gay,” you can simply say “Takei.”

In a telling exchange, Walter Koenig (Chekhov in the original Star Trek and George's best man at his wedding) indicated that he thought their celebrity heydays were over.  George responded "Maybe for you, but not for me" and this has certainly been true.  Now in his 77th year, Takei is busier and more ubiquitous than ever, to the chagrin of Brad who thought they would be relaxing and enjoying their golden years by now.

George's deep voice, easy laugh, big personality, eloquent manner of speech and eternal optimism in face of adversity dominate the movie.  But it is Brad, the shy, unassuming, unintentionally funny yet bossy lover, husband, best friend and business manager of George Takei who steals the show.  Brad's look of horror in reaction to Takei's candid revelations to Howard Stern about their sex life and his constant harping on George's missed lines in his Allegiance debut were just a few of the laugh-out-loud moments of this delightful film.

Our second documentary was "I Am Big Bird - The Caroll Spinney Story" which follows the life and career of the man who played Big Bird and Oscar the Grouch on Sesame Street.  It describes how Spinney was discovered by Jim Henson at a puppet show, how he developed the child-like personna of Big Bird and the skill, strength and dexterity required to manipulate the costume.   The film also focuses on his relationship with wife Debra, who he asked out three times before she accepted, but he didn't realize he was asking the same girl each time.  Much of the movie involved archival footage of the Spinney family, since Debra constantly videotaped their lives and adventures.

I Am Big Bird was a pleasant movie but it had very little dramatic arc since there wasn't really any adversity to overcome either in Spinney's personal or professional life.  The most exciting incident revealed was that Big Bird and therefore Spinney was originally scheduled to go up in the Space Shuttle Challenger but the plans were scrubbed because the costume was too big to fit in the shuttle.  There was also a sequence describing how a murdered woman's body was discovered on the Spinney property and it turns out she was killed by one of their handymen.  This seemed like a forced attempt for drama that didn't quite fit into the flow of the movie.

Our final movie was Ai Weiwei: The Fake Case which documents the aftermath of Ai's arrest, or in his words, kidnapping, which saw him secretly detained by the Chinese government.  In the eyes of the outside world, he had "disappeared".  When he was finally released on bail 81 days later, he was formally charged with alleged tax evasion and participating in pornography and was placed under house arrest.

The double entendre of "Fake Case" can be taken literally since the charges of tax evasion were actually against Fake Ltd., the company owned by Ai's wife.  As it happens, he also lives at 258 Fake St.  But "fake case" is also is a clear accusation against the Chinese government for creating trumped-up, baseless charges in an attempt to marginalize and silence Ai's political fight for democracy and human rights.  The pornography charges stem from provocative works of art like the photo called "1 Tiger 8 Breasts" which features Ai and four women all in the nude.  Ai challenges the concept that nudity equates to pornography and it is noted that none of the participants have any physical contact with each other.  Supporters soon started tweeting nude photos of themselves in solidarity and his artist friend created another nude protest photo that featured himself and numerous unclothed women with cutouts of Ai Weiwei covering their private parts.

As always, Ai Weiwei fights back by turning all adversities that he faces into art.  To illustrate what he went through in his 81 day incarceration, he created six life-sized dioramas depicting guards watching him 7/24 as he slept, ate and even showered.  He enclosed each scene with a 5ft x 12ft box with a slit to look inside and shipped the boxes to Italy for the Venice Biennale.


Ai takes pleasure in provoking the police and the secret service agents that follow him. In one scene, he secretly sends cameras to videotape footage of surveillance agents that are watching him and steals the ashtray containing their cigarette butts.  This ashtray was sent to a gallery as another piece of political "art".

Ai Weiwei was fined 15 million RMB (2.4million dollars) for tax evasion.  One of the most fascinating scenes in the movie starts off by focusing on the wall surrounding Ai's home, as seen from inside his garden.  Nothing happens for a few seconds, and then you start to see objects flying over the wall from the street.  His supporters are donating money to help pay the tax fine by tossing bills over the wall, or sending them as paper airplanes.  In all, he collected over 9 million RMB and was extremely touched by the gestures of the people who saw this as a way of joining his fight.  Again, turning every event into art, Ai posed for photos that show him covered with these monetary offerings.


Ai Weiwei says that "A life that is silenced is not a life... it is death".  And so he continues to speak out, provoke and agitate in the name of promoting democracy and justice in China, at the risk of his own freedom and safety.
Posted by A.R. English at 10:25 AM No comments: Links to this post