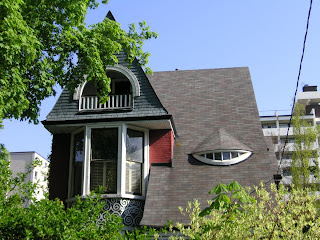 My friends and I decided to take a night-time stroll through the near-by Forest Hill neighbourhood to walk off our dinner and look at the gorgeous homes. Along the way, we encountered some really interesting sights and sounds.

First we were amazed by the size and beauty of the homes, with their immaculately landscaped front yards. We saw houses as big as churches; some with turrets or eyebrow windows, others with huge stone walls or hedges to protect their privacy from nosy voyeurs like us. 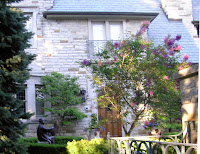 On one of the front lawns, nestled in midst an oasis of foliage was a bronze McElchern statue, depicting his iconic businessman seated and reading a newspaper. The house was even for sale. If only I had the money .. I would have bought it for the statue alone!

We passed by three teenage girls approaching us in the other direction, giggling and chatty happily. Something seemed unusual about the way they were dressed, but in the dark I couldn't quite register what it was. But as they passed as, they suddenly started to tug down on their tee-shirts self consciously and it became apparent that these girls were not wearing any pants!

As we turned the corner, we caught sight of a chauffeur, dressed in a navy blue uniform including the stereotypical chauffeur's cap. Melodic sounds of jazz brought the street alive, and as we got closer to the source, we saw the front of a home that had the entire walkway lit by glowing lanterns. Men in tuxedos and women in designer gowns started flowing out of the home towards their awaiting limos. Walking past the backyard, which was surrounded by tall hedges, we could barely make out the images of a garden party, complete with a sparklingly lit pool, champagne flutes and a live jazz singer and band. I felt a giddy euphoria at my sudden and unexpected exposure to the lives of the upper class.

Continuing on, we passed by Upper Canada College and heard loud chatter coming from the football field. Expecting to see a late night match, instead we encountered a group of tipsy students, seemly leaving their prom or formal. The girls were dressed in short tight glittering dresses while the boys had on tailored slacks and jackets. They looked like they had just stepped out of a fashion magazine.

Finally, the highlight of the evening for my friend occurred when he stumbled over a fully sealed bottle of beer that someone had accidentally dropped at the edge of their lawn. As he pocketed his souvenir from the walk, he happily pronounced this one of the best walks he'd ever been on, and that Forest Hill was the most hospitable neighbourhood which even provided free beer!

My only regret is that I did not bring my camera along to capture any of these memories.
Posted by A.R. English at 9:34 AM

This is great info to know.