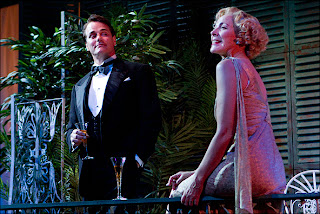 Noel Coward's 3 act play "Private Lives"  revolves around divorced couple Elyot and Amanda who meet by chance in the South of France, while honeymooning in adjacent suites, each with a new mate.  Realizing they still love each other, they ditch their respective spouses (Sybil and Victor) and run off to Paris together.

After several days of bliss, problems ensue when they fall back into old habits, allowing incessant sniping. insecurities and petty jealousies to escalate into full blown fights.  Several times they attempt to quell the brewing argument by invoking the pre-arranged phrase "Solomon Issacs", later shortened to "Sollocks" as as signal to stop all discussions until both sides cool down.  This pair epitomizes the saying "Can't live with them .. Can't live without them".

Canadians Kim Cattrall and Paul Gross are excellent in the lead roles, both showing great comedic timing and physicality.  Kim Cattrall has already been widely lauded for her portrayal of Amanda, which she originated in a London run of the show.  She is beautiful, sexy, sophisticated and intelligent, yet shows a vulnerability under her mask of haughty bravado.  Paul Gross was a bit of an unknown but more than rose to the challenge. As Elyot, he is handsome, debonair, roguishly charming and hides his insecurities with an air of glib flippancy and nonchalance.  Their British accents come and go, but they are so likeable that it doesn't matter.

The lavish set representing the Paris apartment where Amanda and Elyot flee to is so beautifully decorated that it becomes distracting.  It had an art deco feel to it in terms of wall ornaments and patterns and featured a giant round bed on center stage, a covered piano, a pair of chaise lounges that would come into play in the third act, and a very unique goldfish bowl that results in a sight gag.  I found I was spending so much time looking at the details of the room through my binoculars that I was missing the action.

Considering the play was written in the 1930s, Amanda is a particularly strong, sensual, aggressive female character who is more than a match in the verbal sparring matches with Elyot.  The topics of some of these tiffs reflect the social mores of that era.  Elyot finds it promiscuous and gauche that Amanda had other liaisons after their divorce while it was perfectly acceptable for him as a man to do so.

And the fact that he has hit her more than once is treated very lightly with quips like "Certain women should be struck regularly, like gongs" and "I didn't hit you very hard".  It's interesting that the physical violence that they inflict on each other is written to be slapstick-ish humour, with her breaking a record over his head and he slapping her across the face.  But in current day sensibilities regarding domestic violence, there is a double standard where his actions were seen as vile and only hers were considered funny.

One major deviation and anachronism that this staging of the play makes is in the setting for the second.  Noel Coward set his action and dialogue to take place chastely at a dining table whereas the main set piece of this play is the circular bed on which Elyot and Amanda romp and then fight.

The dialogue that Noel Coward writes results in quick repartee between the former spouses.  The warning signs are there as the conversation slowly turns from loving banter to slights and insults.  Its like watching a train rushing towards a cliff without being able to stop it.  At the height of their most vicious battle, Sybil (so named just so Coward could include the joke "Don't quibble, Sybil") and Victor arrive to confront them, making a bad situation worse.

The two new spouses are clearly no match for the originals.  Victor is stuffy and boring while Sybil is a frivolous lightweight.  There is a huge laugh when Elyot tries to escape the awkward situation and when asked where he was going, Paul Gross answers "Canada".  One would think that he threw in that line as a self referential joke, but it was actually as written in Noel Coward's play.   Coward uses his trademark ending (which he has used in at least 2 other plays) by having Amanda and Elyot quietly sneak out of the room as Victor and Sybil end up in their own knock-down drag-out brawl.

This is a very enjoyable play which will hopefully do well when it travels to Broadway after its Toronto run.  It will be playing at Royal Alexandra Theatre until the end of October.
Posted by A.R. English at 11:20 PM