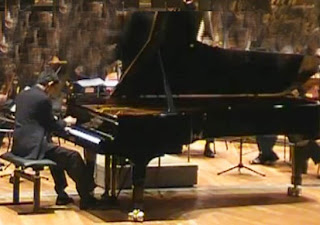 The Canadian Opera Company continues to sponsor free lunch time concerts at the Richard Bradshaw Amphitheatre in the Four Seasons Centre for the Performing Arts.  Recently featured pianist Ricker Choi had a back story that is as interesting as his performance was impressive.

Despite being gifted with musical talent, Ricker chose instead to pursue a business career by getting an MBA and working full time as a financial risk consultant.  Yet he still finds enough time to hone his piano skills to place second in the Boston and Berlin International Amateur Piano Competitions and play with the Berlin Philharmonica Orchestra.

Showing up in a suit and tie, on a lunch break from his day job at TD Securities, Choi proceeded to wow the audience with 3 classical selections which he played solo, without sheet music.  Prior to each composition, he gave a brief description of the composer, the music and his own personal interpretation of how this piece made him feel or what it meant to him.  This added to the audience's appreciation as we could now try to relate to his interpretations.

For Alexander Scriabin's Sonota #5, he paints the imagery of one floating in space.  In contrast, for Johann Brahm's Opus 118, of which he played 4 out of 6 pieces, Ricker explains how this was written at the end of Brahm's life.  The music is somber, lyrical and contemplative as if the composer is reflecting on his life and foreshadowing his death.  Choi proposes that La Valse by Maurice Ravel is a metaphor for the destruction of Europe during WWI.  It begins with light frothy Venise Waltz music that was popular before the war but eventually morphs into something darker as the waltz melody becomes intermixed with deep thundering notes reflecting the trauma and chaos that war brings to Europe.

Through the hour of skillful playing, Ricker Choi's fingers  would gently float across the keyboard, and then pound forcefully in the climatic moments, terminating one piece with a glissando that ended with his arm raised in the air in a triumphant flourish.  The performance was breathtaking.  If this is what he can accomplish with his "hobby", it is inconceivable what the results could be if he devoted all his time to this.
Posted by A.R. English at 10:31 PM

hi Annie and Rich. this is Ricker whom you came to hear me at Four Seasons Center for my piano solo recital there. It just slipped my mind that I should have told you guys about my concert just held at Glen Gould Studio on June 23... if you like me to let you know about my future performances, pls email me at ricker.choi@yahoo.ca

thanks for your write up and support!