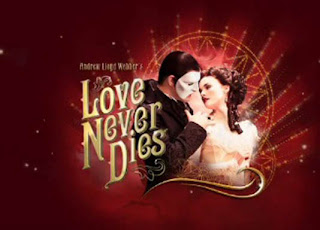 It is with some unease that I went to watch the screening of the Australian performance of Andrew Lloyd Webber's sequel to Phantom of the Opera. Love Never Dies played to extremely mixed reviews in London and was generally panned, causing the planned road shows to Broadway and Toronto to be indefinitely scrapped. However the Australian version had been tweaked and rewritten, so I hoped for the best.
While the show features some good songs and the sets and costumes are beautiful, the main issue is with the plot, which is silly and totally revisionary in relation to The Phantom of the Opera.  In the original, the Phantom was an obsessed, villainous murderer who kills several people before he kidnaps a terrified Christine, while Raoul is her soulmate and heroic rescuer.   In this sequel, we are supposed to forget all that and believe that the Phantom was actually the true love of Christine's life and that they were starcrossed lovers torn apart.  Meanwhile Christine married Raoul on the rebound and he has turned into a drunken lout who has gambled away all their money.

We learn in Love Never Dies that Christine and the Phantom fell deeply in love during their time together and had a tryst.  Feeling that he was too hideous for her, the Phantom fakes his death and flees to America with the help of Madame Giry and Meg (characters from the first show).  He builds a theme park called Phantasma on Coney Island where he produces a vaudevillian show with a bunch of other freaks and outcasts.  Ten years later, he yearns to reunite with Christine and lures her to come sing for a "mysterious benefactor".  Needing the money, she arrives with Raoul and their son Gustave in tow.  Problems ensue when old rivalries are rekindled between Raoul and the Phantom, as well as Christine and Meg, who rightfully fears that Christine will take over her place both in the Phantom's heart, and as the lead in his show.  Things come to a head when it is discovered that Gustave is actually the Phantom's son!    The finale is so maudlin and overwrought that some members of the audience actually burst out laughing at one point, not exactly the desired reaction. 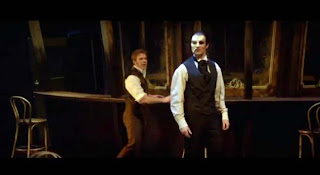 As expected with an Andrew Lloyd Webber musical, there are some very good songs in the mix, although there were some that I found dull as well.   My favourite song is called "Devil Takes the Hindmost", which is a confrontation between Raoul and the Phantom as they fight over Christine's love.  They make a bet over whom she will choose with Raoul agreeing to leave if Christine sings the Phantom's song, while the Phantom will pay off Raoul's debts and set them free if she refuses.   I did wonder at the time what the heck was a "hindmost".  Later on I learned that "Devil Takes the Hindmost" is a proverbial phrase meaning "let the strong be victorious and the others will be left behind". 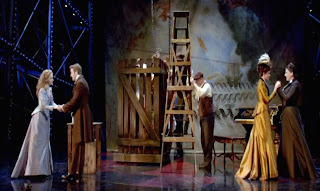 Another clever song is "Dear Old Friend", which is a quartet between Meg, Christine, Madame Giry and Raoul. On the surface, the four are greeting each other benevolently and affectionately, but it is clear from their facial expressions and side conversations as they turn away that there is suspicion, resentment and animosity underneath.  Meg and Madame Giry are concerned about what Christine's presence will mean for Meg's role in the show, while Raoul finds out that the Phantom is the benefactor whom Meg and Madame Giry also work for.  It is amusing for the audience to hear the words being sung but to understand what is really going on. 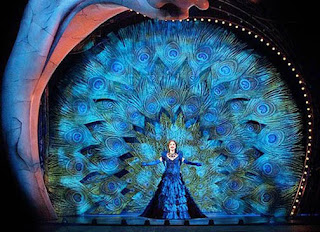 The title song "Love Never Dies" is the eleven o'clock number of the show.  It has a lovely infectious melody that I still find myself subconsciously humming.  This is the aria which the Phantom wrote for Christine to sing, and the basis of the bet between Raoul and the Phantom.  Of course Christine chooses to sing the song and unknowingly seals her fate with the Phantom.

I usually don't like operatic soprano songs (which covers most of Christine's singing) but this one somehow got to me and Anna O'Bryne who plays Christine sings it beautifully without sounding shrill.

The sets and costumes of this production are visually stunning.  When Christine first comes out to sing Love Never Dies, it appears that she has a huge peacock feather attached to her dress and the effect is amazing.  It turns out this is just the background of the set, made to match her gown perfectly.

Meg has two big vaudeville numbers including one called Bathing Beauties where she does a mock striptease, removing each bathing suit layer to reveal an even skimpier one.  The other freaks in the show are dressed up like scary circus characters, led by the trio of a creepy clown, a strong man and a midget, who seem to act as the Phantom's "henchmen".  When the Phantom shows Gustave around Phantasma populated by all the freaks and creatures, it seems like they are in the Chamber of Horrors.  The fact that the musically inclined Gustave finds them all "so beautiful" leads the Phantom to guess that this is his son.  It therefore seemed illogical later, when Gustave shrieks in fright as the Phantom reveals his face to him, since he found all the other grotesque figures to be fascinating and beautiful.  Again, plot and storyline is the main problem with this show.

Regardless of its flaws, I did enjoy this production.  I probably would not have risked shelling out the big bucks to see it live, so watching it on screen at Cineplex for $18 is a great way to check out a dubious show that you're not that sure about.  In the end, I'm glad to have added this musical to my repetoire of shows that I've experienced.
Posted by A.R. English at 5:19 PM