As autumn approaches, another season of free concerts in the Richard Bradshaw Amphitheatre at the Four Seasons for the Performing Arts has begun.  One hour concerts at noon on Tuesdays and Thursdays (and sometimes Wednesdays noon or 5:30pm) feature either piano, jazz, dance, vocal, chamber music or world music performances. 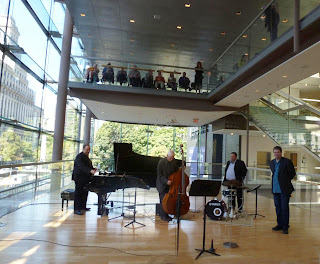 We watched the Dave Young Quartet play a jazz set which included songs by Oscar Peterson (Wheatland), Rogers and Hart (Falling in Love with Love), and some Glenn Gould Bach-inspired music as a tribute to what would have been Gould's 80th birthday.

The quartet was led unusually by the bass player, Dave Young, with Kevin Turcotte on trumpet, Robi Botos on piano and his brother Frank Botos on drums.  Unlike the role of the bass player in most bands, Dave Young carried the melody on many of the songs. He even played some tunes using his bow, which I've never seen in jazz before.  My favourite songs featured Turcotte playing a muted trumpet.  I really like that sound.

For the first time in many years, I was able to get a seat for one of these free concerts.  When I first started going about 4 years ago, you could show up to the noon concert at 11:45am and still get a seat.  Within a few years, the popularity of these concerts grew and even by 11:30am, it was standing room only, with the doors closing due to capacity shortly after.  I've always wondered how early you now had to come to get one of the 100 spots on the amphitheatre style seating that faced the concert.  This year since I was not working, I showed up really early and got my answer.  You need to be in line by 11:10am or forget about it.  Although it was great to finally be able to watch the concert from the proper vantage point, it was hard on my lower back to sit on the steps without a back rest.

There was a row of chairs on the floor above the concert, situated behind the performers.  After a while, I almost wished I was sitting there since at least they had back support.  This is also where wheelchairs could be positioned.  It was amusing to watch the row of people that sat above.  I was surprised to see a number of them reading, napping or even doing a crossword puzzle during the performance.  I guess they were multitasking while enjoying the music.