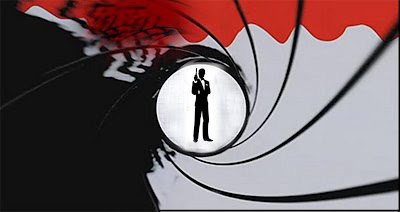 Joining in on the celebration of the 50th anniversary of the James Bond film franchise, TIFF is hosting the exhibition Designing 007: Fifty Years of Bond Style. The entrance to the show is shaped like the iconic spiral rifle barrel that Bond is often shown in during the movie opening credits. I wonder how many people have been tempted to pause and strike the "James Bond pose" as they walk through. Off to the side, TV screens simultaneously play all the opening credit scenes from the various Bond movies.  Inside, 007 props, costumes, video clips and other memorabilia abound.

The first room features a collage of photographs of all the various actors who have played James Bond.  A glass case contains various fake passports, a wallet containing credit cards, a lighter, a flask and a few handguns.  It was interesting seeing the guns up close since they were looked like cheesy plastic imitations.

A chronology of author Ian Fleming's life revealed some interesting tidbits.  He based the names of some of his most infamous villains on school mates from Eton, such as Tom Blofeld or George Scaramanga.  Fleming wanted a nondescript name for his hero and chose James Bond after the author of the book "Birds of the West Indies".  Bond does not like drinking tea or Windsor knot ties, mirroring Fleming's own distastes.  Fleming based the gambling scene from Casino Royale on a personal experience during the war.  He was in a casino and decided to try to relieve some Germans of their money as a way to help out the war effort.  Unfortunately he was wiped out instead, but the idea made it into the Casino Royale book where James Bond fared much better.

One entire room is devoted to "golden" artifacts from various movies. Lying on a rotating bed is a mannequin in a bikini bottom painted all in gold, replicating the death of Jill Masterson from Goldfinger.  Also from this movie are Oddjob's steel rimmed hat (which was accidentally given away to a fan and had to be bought back at auction for 62,000 pounds), the only remaining "gold" ingot which Connery had autographed, Auric Goldfinger's suit jacket, Pussy Galore's waist coat, and the gold record from Shirley Bassey's hit song of the same name.  The highlight of this room was Scaramanga's golden gun from The Man With The Golden Gun.  It comprised of a cigarette lighter as the firing chamber, a cigarette case as the grip, a pen shaft for the barrel and a cufflink for the trigger - all in gold, of course.  The golden bullet distinctly has 007 engraved on it.

The room filled with replicas of Q's gadgets and weapons is quite fun.  Included were the Omega Sea Master watch with built in laser, various briefcases that hide a sharp blade or plastic explosives shaped as toothpaste or an alarm clock, a pack of cigarettes that is a detonator for a bomb, and the Lotus car that turns into a submarine.  In each case, a video clip is shown from the movie that the weapon is used in.

Costumes or artifacts from many of the villains were on display.  There was a ceramic painted bust of Hervê Villechaize as NickNack from The Man With The Golden Gun, TeeHee's iron claw arm from Live And Let Die, the maid costume and hidden shoe blade of Rosa Klebb in To Russia With Love, the hooded robes of MayDay from A License To Kill, or the different stages of plastic surgery that Blofeld goes through in Diamonds Are Forever.

Bond girls are also represented. Jinx's orange bikini from Die Another Day, worn by Haley Berry was hung side by side with Ursula Andress' iconic white bikini that she wore as Honey Ryder in Dr. No.  Andress was a voluptuous bombshell in her day and the scene where she emerged from the water wearing that white bikini is seared in the brain of every middle-aged man who was a teenager at the time.  But in comparison, Berry's bikini top was noticeably the fuller one.  Also interesting was comparing Sean Connery's relatively modest shorts-like swim trunks with Daniel Craig's much skimpier, crotch-hugging ones. Other costumes and props included those worn and used by Solitaire in Live and Let Die, Tomorrow Never Dies character Wai Lin's leather suit and Verity's outfit and sword from Diamonds Are Forever.

A large section is devoted to the tuxedos, evening gowns and jewelry used in the now expected casino scenes.  The various tuxedos worn by the various James Bonds did not have much variation (other than the Scottish kilt outfit for George Lazenby in His Majesty's Secret Service).  On the other hand, the dresses created for the Bond girls were stunning and unique, ranging in material, colour and decoration.  Some were shimmery, others lacy but all were sexy and revealing.

The final part of the exhibition highlighted the different foreign, exotic locations that the movies have been set in.  James Bond has traveled around the world to places including Japan, San Monique, the Udaipur Jungle, Afghanistan, Saint Petersburgh, Cairo, Venice, and even to a space station in the movie Moonraker. 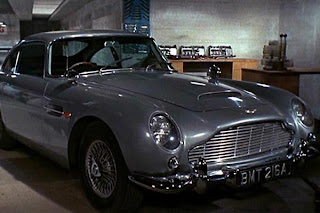 This was a very comprehensive retrospective of the James Bond canon.  The only thing that would have made it complete would have been the presence of an Aston Martin DB5.  We had to settle for a little gold toy model.
Posted by A.R. English at 8:17 AM