This Christmas season, we watched two musicals based on traditional fairy tales and classic children stories that were each given a modern, feminist spin with a message of gender equality. This has been an ongoing trend for new fairy tales (Brave, Frozen) and revivals of old ones.  To quote our new Prime Minister Justin Trudeau, the reason is "because it's 2015".  The 1957 Rodgers and Hammerstein television version of Cinderella has been updated so that Cinderella saves Prince Topher, by helping him find his purpose in life, as much as he saves her from her wretched existence.  In the annual Ross Petty pantomime Peter Pan in Wonderland which is a mashup of the Peter Pan and Alice in Wonderland stories, Wendy gets Peter to agree that she should be allowed to be the heroine in their adventures occasionally.

While the commonly known version of the Cinderella story is the 1697 one by French author Charles Perrault, who introduced the elements of the fairy godmother, pumpkin coach, glass slippers and the midnight curfew, the tale originated centuries before and has been retold for centuries after.  Variations of the basic story of the persecuted heroine finding her savior can be found across cultures, with different names for the main character and slight variations in some of the plot points.  We saw an example of how universal the tale is when we visited the Bata Shoe Museum and perused their semi-permanent exhibit titled "All About Shoes: Footwear Through the Ages".   Part of this exhibit is devoted to versions of the Cinderella footwear from various times and cultures.  There was the French glass slipper, Dutch blue and white porcelain slippers, Korean straw sandals and gilded leather shoes from ancient Egypt.

The 2008 Broadway revision of Cinderella follows the main storyline of the French 1697 version, but updates it with a series of modern twists.  In this retelling, Cinderella is still beautiful and caring but also much more spunky and intelligent, while Prince Topher is still charming, but a bit naive and clueless as to the workings of the world and his place in it.  Topher is unduly influenced by an evil advisor who tricks him into approving oppressive laws against his people.

Cinderella first meets the prince when he is passing by her cottage and she kindly offers him a drink of water without realizing who he is. Their next two meetings are at the royal balls but when she flees after the second soiree, she intentionally leaves one of her shoes to help him locate her, as opposed to accidentally doing so in the traditional narrations.  And when he finally finds her and declares his love but is unsure what to do next, she prompts "Oh, well is marriage still on the table?".

The other major deviation from the traditional plot is regarding the depiction of Cinderella's step-family.  While there is still a wicked step-mother, only one of the stepsisters (Charlotte) is wicked, while the other one (Gabrielle) is meek but compassionate towards Cinderella.  Gabrielle is secretly in love with Jean-Michel, a revolutionary who advocates for the plight of the people.  Cinderella eventually counsels Prince Topher to listen to Jean-Michel and to address the injustices being heaped upon his subjects.  So Cinderella and Topher unite more as equals who each enrich the other's life and together, they will make their kingdom a better place for their people.


Although the story has been modernized for this musical, the tunes are still from the late fifties.  Most of the songs from the original Rodgers and Hammerstein production have been retained (including "My Own Little Corner", "It's Possible", "Ten Minutes Ago", "Stepsisters Lament" and "Do I Love You Because You're Beautiful?") and additional songs were added by raiding the Rodgers and Hammerstein oeuvre and picking up obscure songs ("Me, Who Am I?", "There's Music In Me") whose lyrics could be fit into the story.  Accordingly, the music sounds dated and contains too many soprano solos for my taste.

The best attributes of this Broadway show are gorgeous dresses and the amazing on-stage metamorphosis of both Cinderella and the Fairy godmother from rags to splendor.  With a quick twirl and motions faster than the eye can see, their clothes seem to magically transform before us.  It took several slow-motion viewings of this performance from the 2013 Tony Awards before it became apparent what was happening.  Designer William Ivey Long won the Tony award winning for best costume design for this feat and the other luminous costumes worn by the entire cast. 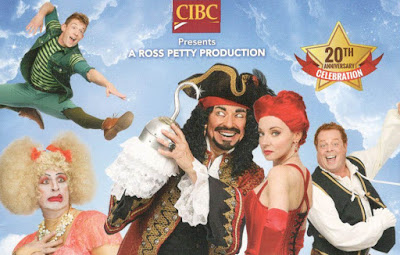 Ross Petty's annual Christmas pantomime merges together the characters and stories from Peter Pan and Alice in Wonderland to create Peter Pan in Wonderland.  Popularized in England in the 19th Century, pantomime is a family-oriented form of musical comedy based on a well-known fairy tale or children's story, featuring singing, dancing, slapstick comedy, cross-gendered actors and audience participation.  The crowd is encouraged to cheer rousingly for the heroes and "Boo!!!" lustily each time the villain steps on stage, engaging in call and response interactions when the villain taunts "Oh no it isn't/he didn't/..." with replies of "Oh yes it is/he did/...".

The action begins when Captain Hook tricks Wendy into traversing to Wonderland where he wants to steal the fairy dust in her locket to open a Pandora's Box-like trunk owned by the Queen of Hearts.  Peter Pan and Tinkerbum (Tinkerbell was busy) follow along to Wonderland to try and save Wendy.  The flightless Tinkerbum is played in traditional grotesque drag by Stratford Theatre cast member Dan Chameroy. Once in Wonderland, the Peter Pan and Tinkerbum are aided by Alice, the Cheshire Cat and the Mad Hatter, who call themselves the "Guardians of Wonderland".  Before they can save Wendy and stop Hook and his sidekick Smee, they first have to deal with the Queen of Hearts and her posse of playing cards, as well as Hook's goofy minions.


While the main plot, characters, colourful costumes and sets are geared toward the kids, many of the songs and most of the jokes are aimed at entertaining the adults in the audience.  Currently popular songs are featured including Taylor Swift's Bad Blood, Bruno Mars' Uptown Funk, Meghan Trainor's Dear Future Husband and Rachel Platten's Fight Song.  Many of the jokes, including some real groaners, reference local topics and current events such as Jose Bautista's bat flip, Donald Trump's hair, and Stephen Harper's downfall (Hook was his life coach before becoming a pirate).  When Wendy falls down the rabbit hole, images flash by including the falling silhouette from Mad Men.  Pan is compared to Justin Bieber in terms of never growing up.

This year's production is extra special since it is the last time that Petty will act in the annual show.  After 20 years of playing the main villain in the pantomimes, Ross Petty has decided to step back and focus on producing the events.  Doing both has become exhausting for the 69-year-old actor and he feels it is much more important for him to concentrate on keeping the shows financially viable.  He does this by courting corporate sponsors and unabashedly referring to them in the show, either via product placement, or even video-based commercial interludes where the show stops and the ads are played.  This year's sponsors include Hilton Hotel, Sick Kids Hospital, and Toronto Star who is heavily promoting its new online Star Touch application.  Each of the ads include one or more characters from the pantomime.  The Billy Bishop Airport's sponsorship led to its new underground tunnel being featured in a major plot development for the show.  Main sponsor CIBC received both a video commercial about Tinkerbum finally getting to "fly" by using the CIBC Adventura credit card, as well as recognition for providing the gifts for the three lucky little children who were invited on stage to be part of the show.

Peter Pan in Wonderland was not as funny and the plot was not as cohesive and entertaining as the pantomime that we saw two years ago, based on The Little Mermaid.  But Peter Pan in Wonderland and Cinderella were still both fun events to attend during the Holiday season, and the children in the audiences certainly enjoyed themselves.
Posted by A.R. English at 6:38 PM