The Ryerson Imaging Centre (RIC) is an institution for research, teaching and exhibition of photography located in the heart of downtown Toronto that surprisingly few people know about.  Many of the rotating exhibits are sourced from the massive collection of over 80 years of historical photos donated by the Black Star Photo Agency in New York.  Earlier this year, RIC received another donation of 25,000 photos from the Canadian collection of the New York Times, which will make for even better exhibitions in the future.  Admission is free and an excellent curator tour is given daily at 2:30pm.  I find the tours essential to understanding the nature or history behind the photographs on display, the process used to create them and the message that the photographer is trying to convey. 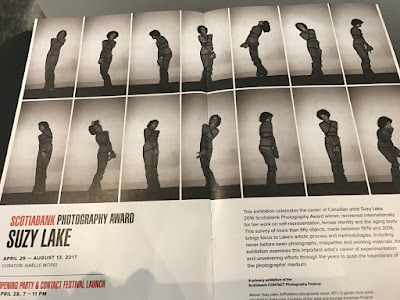 Most recently, we toured the works of Suzy Lake, an American/Canadian photographer, videographer and performance artist, who creates conceptual art focused on female identity and the politics of gender, body image and beauty, usually using herself as the subject in her works.  The exhibition includes over 50 items covering her portfolio between 1976 and 2014.  There is often a physicality in her photos that blends performance art with still photography.  The focus of this exposition is to highlight Lake's methodologies and processes in coming up with the final photo image, by showing all the interim attempts as well.  Not only does Suzy Lake set up the environment for her photos, but she also constructs all the props used in the images, as well as all the frames used to display the pieces.

The Suzy Lake exhibition begins in the lobby of RIC with a video depicting Lake rolling on the floor, wrapping and unwrapping herself with a long sheet with a dotted line up the middle that reminded me of a two-laned road.  Watching this, I wondered if she was portraying herself as road kill?  Entering the main space that presents her works, we see more photos of this 1977 series titled "ImPosition" (a play on the term "imposition"?) depicting a trussed up Suzy Lake bound from her neck down to her feet.  Lake varied the background of the photos, starting with a blank wall before settling on a room with scuffed up walls and wooden floor boards.  She also set some of the negatives of fire, causing a curled up, elongated effect when the subsequent photos were developed.  In her words, "the bound or restrained figure becomes a metaphor to question notions of control".  Lake was perhaps using the physical restraints to symbolize the social, political and economical constraints faced by the female gender.

According to our tour guide, Suzy Lake's series of 1976 "Puppet" studies explored a similar theme—that the traditional roles of a woman (wife, mother, fellow breadwinner) makes her feel like she is being pulled in all different directions.  Lake indicates that the works raise the question of "who pulls the strings?".  She began by posing for photos while simulating the motions of a puppet with her body.  To further clarify her intention, after developing the photos, she added actual lengths of white string to the images to represent the puppet strings.  Taking it one step further, she built an apparatus that allowed her harnessed body to be manipulated like a puppet, engaging two helpers to randomly pull her arms and legs while a third assistant snapped photos of the process.  In 2014, the Art Gallery of Ontario (AGO) held a Suzy Lake exhibition where they actually displayed this contraption.

In the 1978 series called "Are You Talking To Me?", (in reference to Robert Deniro's iconic line in Taxi Driver) Lake took multiple photos of herself as she conversed out loud to herself about an undisclosed subject.  In an exploration of identity, these self-portraits (precursors to the selfie?) convey a myriad of emotions.  Some of the images are distorted by heating and stretching the negatives.  Lake then subtly painted parts of the portraits including the mouth and neck areas to further enhance the photos.  The installation instructions indicated that the set of framed photos had to be hung so all the mouths aligned at the same height.  Lake repeated this experiment dressed in various styles of wardrobe before deciding on the collared shirt featured in the final product.

A set of coloured photos from 1983/84 titled "Pre-Resolution" depicts Suzy Lake using a sledge hammer to demolish a wall that she had previously painted scarlet red.  Dressed in a bright yellow sweater and blue jeans, the photos reflect saturated primary colours.  We are told by our tour guide that these photos were created during a period when Lake was going through a divorce, so creating these works might have been therapeutic for her.  We are told to look carefully at the main photo and note that it is set in a 3-inch deep cedar frame, where the photo is angled so that it leans back at the top.  The surrounding frame is hand-painted so that it appears that the photo extends onto the frame.  A black and white photo from this series is annotated to describe exactly how the main work should be mounted.  Next to the main photo, a pair of photos form a diptych.

In 2014, at the age of 67, Suzy Lake's provocative series called "Beauty at a Proper Distance" takes an unflinching look at aging and the concept of beauty, in a set of closeup shots of her face from her nose down to her neck.  Displaying a total lack of vanity, the photos show every wrinkle, wart or blemish, stained teeth and facial hair.  She even purposely let her hair grow for months in order to capture the photos that she titles "Pluck", which shows her using tweezers to pull out what she calls "post-menopausal facial hair" from her chin.

The series that I found most fascinating from a technical standpoint was Suzy Lake's 2013/2014 set of long-exposure photos that she called "Extended Breathing in Public Places".  To achieve these cool photos with the "ghost-like" images in the background, she used an extremely long exposure and tried to stand as still as possible for up to an hour while people passed by behind her. Her photo in front of Diego Rivera's famous Detroit Industry mural at the Detroit Art Institute features her son-in-law standing to her left.  You have to look closely to see the transparent images accompanying Lake in the black and white photo taken in Trinity Bellwood Park, including a person sitting on the bench and some people sitting on the grass and under a tree.  The longer the people stay in the frame of the camera during its long exposure, the clearer and more defined they become.

When we made our first pass through the Suzy Lake exhibit prior to taking the tour, I found her portfolio interesting, but did not really understand what she was attempting to achieve or convey with each series.  After taking the very informative tour, I now appreciate even more Lake's sense of experimentation and creativity in pushing the boundaries of photography to create her works.
Posted by A.R. English at 10:56 PM