This year for the Toronto Fringe Festival, my husband Rich and I planned to watch 10 shows together.  We each bought a 10-show pass for $85, which provides significant savings from the single advanced ticket price of $12 per show.  The only issue with the pass is that there is a chance that a popular show will sell out via advanced ticket sales before we have a chance to redeem tickets using our passes at the venue.  It used to be that Fringe would reserve a portion (up to 50%) of the tickets for walk-up ticket sales, which become available 1 hour prior to the start of the show.  But in recent years, the Fringe Festival decided that if they could sell out a show in advance, they should take the sure thing.  You can hardly blame them.

We ran into an issue on our very first show, a dystopian comedy called Lemons, Lemons, Lemons, Lemons, Lemons (henceforth referred to as merely "Lemons" for brevity).  We arrived a few minutes before the start of the sales window to find that all advanced tickets had been sold, but that we could go on a wait list for unclaimed "comp" tickets that would become available 10 minutes prior to the start of the show.  These tickets are reserved for friends and family of the cast, crew and reviewers related to the show, but often they go unused.  Our names were added to a written wait list which was good since it meant that we did not have to stand in line to keep our positions (#7 and #8) on the wait list, unlike rush lines at the Toronto International Film Festival.  We went across the street to grab a quick snack and returned in time to secure our tickets from the list.  We were lucky this time, but thought that if this continued to happen to us, we may have to reconsider buying the volume passes in the future and just purchase advanced tickets to the shows that we want to see.  As it turned out, this was the only time that the show we chose was sold out, so by the time it came to our final shows, we stopped arriving so early to try to buy tickets. 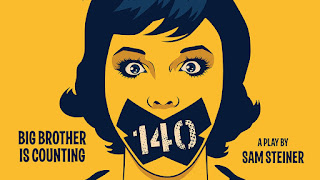 The premise of "Lemons" could have been a script for the dark and intellectual near-future science fiction drama series "Black Mirror", since it takes a seemingly innocuous technology-related aspect of our present, and takes that concept to its disturbing extremes.  Using the absurdly random restriction of Twitter's 140 character limit for tweets, "Lemons" examines a world where a law is about to be enacted that restricts each person to saying only 140 words per day.  Political activist Oliver and his divorce lawyer girlfriend Bernadette deal with this impending reality, with small vignettes that shift the action back and forth in time to periods before and after the law has come into existence.  Their conversations are a bit obscure and confusing at first as you try to understand why they keep throwing out numbers (42, 5, 138, ...) and the significance of the loud "ping" sound that signals the end of each vignette.  By the end, all becomes clear as the play reflects on issues such as freedom of speech, the art of communication, and the importance of not wasting time or words by saying what really matters to you.  I thought the performances and timing of the two actors were excellent and the premise to be relevant and intriguing. I love musicals, but I was a bit hesitant to select "Seeking Refuge" since the plot of this musical tragedy sounded so dark and sad.  But since the play won the prize for Fringe 2017 best script of a new musical, I had to give it a chance.  Two sisters attempt to flee from civil war after their house is bombed and the rest of their family is killed.  All they have in their possession are a few family jewels, enough to pay for just one of them to board a boat that will smuggle refugees to the safety of a neighbouring country.  The story follows the trials and tribulations of both the sister fleeing towards freedom, and the one left behind.  This play should be appreciated for its ambitions but lacks depth in character development as conveyed through snippets of singing that were so short and ended so abruptly that initially the audience was slow to clap because they did not realize the "songs" were over.  I also found the music too operatic for my tastes, but the show has potential if it could be further developed. 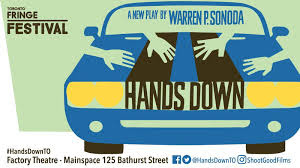 After two heavy, dramatic plays dealing with relatively depressing topics, it was time for some lighter fare.  We struck comedic gold with Hands Down, about an endurance contest where contestants have to keep in physical contact with an automobile and the last person would win that car.  Contestants must be 18 or over and are not allowed to eat, sleep or use their cell phones.  The wheeling and dealing, negotiations and plots hatched by the remaining 5 contestants lead to a very entertaining plot, as you learn more about the backstory of each person and his/her motivation for winning the contest.  In addition to a clever script and crisp dialogue, the most impressive part of the play was the stagecraft involved in creating and manipulating the car, which consisted of four sections that could be separated, rotated and put back together to form a very realistic looking vehicle that even includes real seats.  As the car is spun around, the conversations between various groups of contestants are featured.  This was my favourite show of all the ones we watched this year.

Our next couple of shows highlight the fact that humour is very subjective and a matter of taste.  We had high hopes for the comedy Special Constables about a TTC police task force trying to crack a Metropass theft ring, since it received rave reviews across the board.  For some reason, even though the audience roared with laughter throughout the show, we did not find any of the jokes to be even remotely funny.  It did not help that I could not hear some of the lines due to soft voices or poor enunciation.  Watching the show at 10pm after a long day probably dulled my sense of humour and concentration skills as well.

I typically don't like sketch comedy, preferring a play with one overarching story line, but we agreed to watch Sketch Betch at the urging of our friend.  As expected, the sketches were hit and miss for us as we found some to be very funny but other ones just didn't appeal to us.  Considering that the laughter in the audience never rose above a mild chuckle, I'm assuming that others agreed with us. My favourite sketches included monks having difficulty maintaining their vows of silence, and a Monty Python-esque bit involving a waiter who offered innumerable choices for each part of an order. 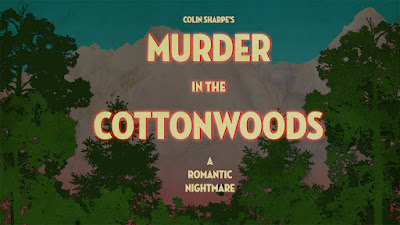 Having never watched Twin Peaks, I was not prepared for the weird characters and events portrayed in Murder in the Cottonwoods, which is heavily inspired by the strange and campy TV series that featured elements of horror and the supernatural.  Like Twin Peaks, the plot revolves around a murder of a popular prom queen in a small town.  Following a strange dance intro in the opening scene (apparently referencing an equally strange dance scene in the TV show), the murderer is revealed covered in blood, but all is not as it seems.  The dialogue and interactions become more and more bizarre as no one in the town seems to want to investigate the murder or accept the confession of the would-be killer.  The sheriff in the play has a fondness for eating pretzels, whereas in Twin Peaks it is cherry pie that is constantly consumed.  Instead of the iconic catchphrase "The owls are not what they seem", Murder in the Cottonwoods uses two phrases—"The Cottonwoods are whispering" and "Do Not Disturb".  Not having any knowledge about the Twin Peaks references, this play completely bewildered me and I had no clue what was going on.  Subsequently learning more about the source material, I can now appreciate what the play was attempting to do, but I can't say that I enjoyed it.  I doubt I would have enjoyed Twin Peaks either. 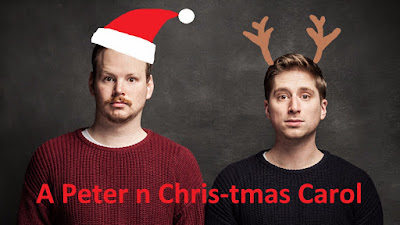 One of the shows that we enjoyed the most and found the most entertaining was A Peter n Chris-tmas Carol, a spoof not only on the classic Dickens Christmas Carol story, but also other Christmas classics including the words to Jingle Bells, Frosty the Snowman and the movies Home Alone and Die Hard (both set in the Christmas season).  Comics Peter Carlone and Chris Wilson had the audience howling with laughter right from the beginning, and this time, we joined along.  These two lovable goofs were quick with the repartee and adept at physical comedy.  This was Rich's favourite show.

We were a bit ambivalent about our next two shows, neither loving them nor hating them.  We are usually a bit wary about one-woman shows involving journeys to self-discovery which often tend to be either maudlin or narcissistic.  We decided to give Am I Pretty Now? a try since it was advertised as a musical.  This was an autobiographical story about what led an aspiring actress to undergo major plastic surgery, the physical tolls of these surgeries and the end result of better self esteem and more acting roles.  The story was compelling enough and was well delivered but there was not enough singing for my taste.  By contrast, there were plenty of songs in Shirley Gnome: Taking it Up a Notch, the raunchy, over-the-top one woman comedic show where Gnome gleefully and lewdly sings about topics including sex (oral and otherwise), female body parts, and male hygiene and tries very hard to be shocking.  Gnome has a good singing voice and we found many of her songs to be funny, but her spoken patter felt forced.  And there is something off-putting about a comic laughing continuously at her own jokes (whether the audience laughs along or not) 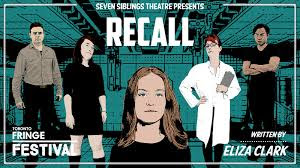 For once, we ended Fringe on a high note with the psychological Sci-Fi thriller Recall.  Set once again in a dystopian future (just like Lemons, our first show), rowdy, misbehaving or aggressive youth are monitored for potentially sociopathic or murderous natures so that they can be either reconditioned or eliminated before any harm is done to society. Two potential subjects for these investigations include the moody Lucy, who seems to be on the run and hiding in a safe house with her flighty but caring mother Justine, and Quinn, the boy Lucy meets at school who has authority and anger issues.  Tension is ratcheted up from the very beginning and the entire cast gives mesmerizing performances with a plot full of twists that touches on some interesting themes.
Posted by A.R. English at 10:11 PM