Over the past year, I've started to appreciate the vast and varied programs that are held at the various branches of the Toronto Public Library.  These include book club events where the author comes to talk about their book, as well as lectures and talks on selected books or writers.  Last year, for "Keep Toronto Reading" month, I read the featured book "Midnight at the Dragon Cafe" and attended a book club meeting hosted by the author Judy Fong Bates.  I sat in on a discussion about the cartoon series Tintin by a noted Tintin-ologist who traced the origins of creator Hergé's inspirations. Seduced by the chance to see famous Canadian author Michael Ondaatje speak, I showed up for a discussion about transforming his book Diversado into a stage play.  Unfortunately I did not have time to read even a synopsis let alone the book, so this made for a very confusing and unsatisfying experience - at very least, I should have read the Wikipedia summary. 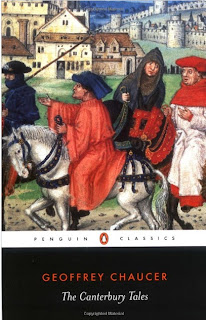 Just recently, an English professor from the University of Toronto, specializing in medieval literature, came to our local Deer Park branch to talk about Geoffrey Chaucer's Canterbury Tales.  If you've ever tried to read the Canterbury Tales, you will know that this is not an easy read.  The "English" language of the 14th century bears little resemblance to the words we use in modern times.  Sentences like "And palmeres for to seken straunge strondes, To ferne halwes, kowthe in sondry londes;" make you reassess the complexity of reading Shakespeare.

Having learned my lesson from the Ondaatje experience, I did my research before attending this session.  I read the SparkNotes about this "framed story" where the 29 participants of a pilgrammage to Canterbury are requested by their host to tell several tales, with the best one winning a free meal from the other travelers. 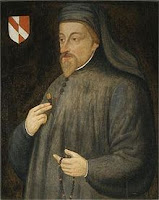 Professor David Klausner was a dynamic speaker who was obviously passionate about his topic.  He broke down the talk into 3 parts, describing Chaucer the man, the poet, and the character within Canterbury Tales.

He gave a detailed biography on Chaucer, much of which was inferred since little was written down in those days.  Chaucer was probably educated in the prestigous St. Paul's Cathedral School (based on his excellent linguistic skills and knowledge of classic literature), served as a footman to royalty and proceeded to have a close relationship to the British monarchy throughout his life.  He worked officially in many roles as an administrator (tax collector, manager of royal estates), but also translated literary works into English.  At one point, he may have been the official poet laureate to the crown.

In Canterbury Tales, (as well as other works such as "Book of the Duchess"), Chaucer wrote himself in as a character (in this case the narrator), usually depicted as a bumbling fool for comedic effect.

In the introduction, Chaucer the narrator describes the "palmers", who come from various occupations and economic classes (including a knight, a miller, a cook, and multiple religious characters such as nuns, a monk, a friar). Through these character portraits, and through the stories that each person tells, Chaucer the poet provides biting, critical commentary on the English society of the 14th century, especially directing his disdain towards the Church.   In many cases the personality of the storyteller is cleverly reflected as well in his tale.  A monk who is described as a bore tells such a monotonous story that he is urged to stop.


In discussing Canterbury Tales and profiling a couple of the pilgrims, Professor Klausner read passages from it, in a lilting English accent, forcing us to listen carefully to try to pick up the obscure Medieval terminology.

Chaucer couched his criticism in sarcasm as he described the Prioress, a highly ranked nun in a priory.  He "praises" her refinement and good table manners, and describes her expensive wardrobe and jewelry, her use of French (but not the French "of the court") and love of animals.  What he does not mention is any sense of humble piety and while he calls her "charitable", her story belies this characterization.  The Prioress tells the nastiest, anti-Semitic tale about Jews murdering Christian children and being punished through torturous means.

Chaucer's depiction of the "Wife of Bath" is wickedly humourous.  A lusty, portly woman, she has been married five times although it is hinted that she has had many affairs.  She met her fifth husband, a much younger, handsome man, at the funeral of her fourth.  She expounds the benefits of having the wife hold the upper hand in a marriage (which she obviously does in all of hers).  Her story supports this premise - a Knight who rapes the queen's handmaiden is sent out in punishment to find out what women want most.  An ugly hag agrees to tell him if he promises to marry her.  It turns out women want control of their marriages and their own lives (I could have told you that!).  The hag then gives him a choice.  She can be beautiful and unfaithful to him or remain ugly and faithful.  Learning the lesson, he allows her to choose what is best and she rewards him by being both beautiful and faithful (husbands, are you listening?)


Professor Klausner spoke for almost 2 hours non-stop but the animated, interesting way in which he approached his topics kept us fascinated for the entire period.  In lesser hands, this could have been a very long and tedious talk.  Instead I learned so much about Chaucer, Canterbury Tales, 14th Century England and the literature of that time.

Upcoming talks that I've registered for include discussions on Shakespeare's Henry V and Macbeth, in context of their stagings at the Stratford festival.  There will also be a talk by this year's Giller Prize winner Esi Edugyan on her book Half-Blood Blues.

These library events are a great way to gain interesting insight into literature.  It's too bad I've come to appreciate them just as Mayor Ford is trying to cut the library budget.  Hopefully he has been thwarted by the Margaret Atwood debacle and we will be able to continue to benefit from future programs.