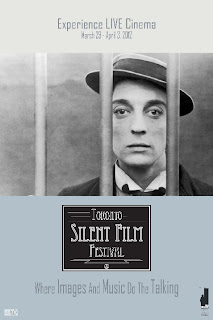 The success of the Oscar winning silent film "The Artist" had revived an interest in the art of the silent movie, just in time for the 3rd annual Toronto Silent Film Festival.  Over 6 days beginning at the end of March, the films were screened at various independent theatres such as the Carlton, Fox and Revue.

We selected the 1927 farce called "The Italian Straw Hat" by French director Réne Clair, based on a popular mid 19th century play.  It was shown in the exotic location of the grand hall of Casa Loma.  Professional silent film organist Clark Wilson composed a musical score especially for the screening and played live accompaniment on the castle's organ, "The Mighty Wurlitzer" for the full 105 minutes of the film.  Included in his score were excerpts from the 1812 Overture, and pieces by Gershwin and Chopin to name a few.


Prior to the screening, Wilson gave a brief talk about the film and the importance of the organist in the silent film era.  In 1920s, there were over 20,000 organists and the top ones made $60,000 in Times Square and often had their name on the marquee ahead of the names of the movie stars.

The titular Italian straw hat belongs to a married woman having a secret tryst with a fiery military man in a field by the road.  An unfortunate groom enroute to his wedding is dragged into the affair when his horse chews up the woman's hat.   The beleaguered groom spends the rest of the film fending off the officer who insists he find a replacement for the hat in order to preserve the lady's honour, all the while trying to get married at the same time.

Humorous and eccentric wedding guests add to the fun including a hard of hearing elderly uncle, the bride's father whose shoes are too tight, and a cousin who is constantly chastised by his bossy wife for having his tie undone.  One of the funniest scenes in the movie involves the cousin's wife trying to gesture to him to fix his tie during the ceremony.  While he is clueless to her meaning, all the other men in the room including the justice of the peace end up adjusting their ties. This movie sheds light on French manners and customs during the turn of the 19th century.  This is the first foreign silent film that I've ever seen.  Compared to the American films of Buster Keaton or Harold Lloyd, this one seemed more focused on  human interaction and situational humour as opposed to physical comedy such as pratfalls and chase scenes.

While the concept of watching a film inside Casa Loma sounded like a unique experience, in reality, sitting in plastic folding chairs crammed closely together and staring upwards at a small pull-down screen was extremely uncomfortable.  However the movie itself and watching the live organist play was quite enjoyable.
Posted by A.R. English at 10:59 PM

The Wurlitzer Theatre Organ sounded fantastic with Clark playing and the film was fun. However,I have to differ with you about the screen. It was not a pull down but a 12'x12'and the chairs, while crammed together, were padded banquet chairs not plastic folders. I think the Organ Society does another screening in the fall.