AGO: Masterpieces from the Musée National Picasso 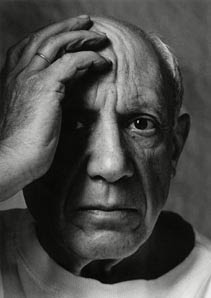 Picasso, Masterpieces from the Musée National Picasso in Paris is the AGO's blockbuster show for 2012.  We're delighted to see this since we've been trying to go to that Picasso museum for our past two trips to Paris but it has been closed each time.  While there have been many different exhibitions of Picasso's work, this one is unique in that it represents the pieces that the artist kept for his own private collection.  Presumably this implies that this body of work held special meaning for him, so it was fun to interpret what that might  be.

Picasso is arguably one of the most prolific as well as eclectic artists that we've ever known.  The number of different painting styles that he attempted are as vast as they are varied in nature.  The exhibition is laid out to follow Picasso's painting periods or styles chronologically, traversing through the Blue and Rose periods, African influences, Cubism, Classicism, Surrealism, War Years, and his last works prior to his death.

Through the years Picasso used the women in his life, from lovers to wives, as inspiration for his art.  The exhibition showed that as he moved through his different periods, he represented his current muse in his "style-de-jour".  His first wife Olga Khokhlova luckily landed in his Classicism period and therefore she was portrayed in a realistic natural form.  Although the portraits of mistress Dora Maar and second wife Jacqueline Roque are distorted with eyes askew or an elongated neck and cubism influenced head, they are still portrayed as beautiful women.  The most unfortunate was his mistress Marie-Thérèse Walter, who came at the height of his Surrealist phase and did not fare as well by comparison.  In the works on display that she inspired, she is unrecognizable and in some cases, does not even look human.

Like many other artists, Picasso reflected his feelings for war through his art.  During the war years which spanned the Spanish Civil War, World War II and the Korean War, his work became darker and more intense.  The traditional "still life painting" usually  consisted of innocuous objects such as fruit, bowls or pitchers.  Picasso's take on still life included skulls and skeletons.  His painting Massacre in Korea, depicting the atrocities of the Korean War was inspired by Francisco de Goya's painting Massacre 3rd of May (1808) showing an execution during the Napoleonic Wars.

Picasso's most famous anti-war painting Guernica was not part of this AGO show, but it did include Dora Maar's black and white photographs documenting his thought process as he developed this iconic work.  In the earlier photos you can see that where he ended up with the horse's head, he originally had painted a raised fist, possibly a gesture in defiance.  It was fascinating to compare the photos at each stage to see the evolution that led to the final result.

Similar to the tribute to Goya's painting, Picasso created more works that were homages to other famous artists.  These included his version of Claude Monet's Le Déjeuner Sur L'Herbe, and a set of bronze sculptures called "The Bathers" which are said to be based on Diego Velasquez's Les Menuires.  The audio guide from the exhibition indicated that the short round sculpture is supposed to be the blond haired princess, while the sculpture with the rectangle frame for arms represents the painter Velasquez himself.  Picasso must have been obsessed with the painting Les Menuires, since in the Barcelona Picasso museum, we saw 16 different interpretative works that Picasso did based on it.  Rich thinks that Picasso's painting "The Bacchanal" reminds him of Matisse's "The Dance".  I'm not that convinced of this myself.

Picasso created many self portraits during his career and it is interesting to compare some of the ones in the show and reflect on what was happening in his life when they were created.  An early 1906 rendering done during his Rose period seems surprisingly clumsy and amateurish considering that Picasso had demonstrated he could paint with "photographic realism".  The audio guide postulated that Picasso was actually trying to simulate early primitive Iberian sculptures with the deep set eyes and big ears.  In "The Shadow" (1953), Picasso is lamenting the end of his relationship with Françoise Gilot.  She is painted as alluring and vibrant reclining beauty, while he is an old withered shadow.

"The Matador" (1970) which he created shortly before his death shows how he wanted to see himself, still virile and masculine as depicted by the cigar and the sword.  He was the fearless warrior confronting all challenges.   Finally one of his last paintings done in 1972 retrospectively shows himself as a young, innocent artist again, full of boyish enthusiasm.

The set of artwork in this show shed light onto Picasso the artist and the man.  It was great to finally be able to see it, and not even have to travel back to Paris to do so.
Posted by A.R. English at 11:16 PM