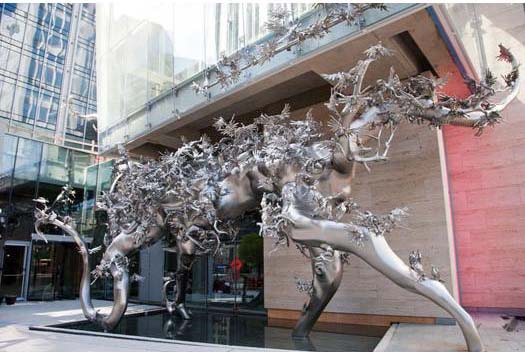 I'm ashamed to say that until recently, I had never heard of world reknowned Chinese artist Zhang Huan who is known for his performance art, sculptures and photography.  Now suddenly, his presence is felt all over downtown Toronto, as he unveiled his new sculpture that will grace the front of the Shangri-La Hotel at University Ave and Adelaide St, has an art exhibition at the Art Gallery of Ontario and was designer and director for the opera "Semele" which played at the Four Seasons Centre for Performing Arts.

The giant permanent stainless steel sculpture is named "Rising" and looks like a morph between a dragon and tree branches or roots, with peace doves perched throughout.  Huan said that his piece "advocates ... harmonious relationship between humans and nature".  What a wonderful addition to our city!

Zhang Huan's show at the AGO is awe inspiring and in some ways, I was more impressed with it than I was with the  Picasso exhibition which I saw on the same day.  Huan's floor to ceiling ash paintings seem to involve an excruiating amount of prep work.  He takes the ash remnants left by worshippers burning incense at temples around China, sorts them into shades of colour (white, beige, grey, black, ..), then uses that ash to create these amazing paintings that are so lifelike and full of depth, texture and even simulated light and shadows.

Airplane enthusiast Rich got all up in arms about the "curatorial error" he spotted in the description of how realistic the painting of the airplanes looked.  It talked about almost being able to hear the whirl of the propellers and smell the fumes from the diesel engines.  He scoffed that this would be quite a trick since these are portrayals of MIG jets which neither have propellers nor use diesel engines.   I think Rich is missing the forest for the trees, but Rich says the devil is in the details.  We've agreed to disagree.

One painting which spanned an entire wall was of many workers in a field with mountains in the background.  The amount of detail depicted in this painting including the clothing and hats on the tiny little people was just incredible.  I spent a long time staring at this particular piece.

Huan also displayed "Memory Doors" which were antiquated wooden doors from country homes on which he pasted old black and white photos representing military, labour or daily life of the Chinese.  He then had carvers chip away parts of the door to replicate the images on the photos.  The 3-dimensional effects of the piece are often accentuated by rivets or bolts originally found on the doors.

I didn't hear much about the opera which he directed but I assume it was just as magnificent as the rest of Huan's work.  Now that I am aware of him, I will continue to look out for more of his art.  I would love to see a performance piece one day.
Posted by A.R. English at 3:12 PM

Wow, every day a new adventure :-)