It is always exciting to watch an obscure musical for the first time, especially when it has beautiful music and a strong storyline that is advanced through song instead of speech.  The 2004 off-Broadway musical Bare: A Pop Opera fits all of these criteria, especially the last one, since a "pop opera" by definition has sing-through dialogue based on rock or pop melodies, in the vein of the musical Rent.  You can listen to the music here on YouTube. 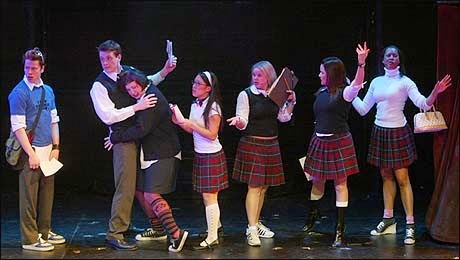 ** Photo by Joan Marcus
Bare is about group of students in their last year at a Catholic boarding school, dealing with issues of identity and acceptance within the confines of their strict religious upbringing.  At the centre of the story is the tumultuous and forbidden love affair between Peter and Jason, two gay teenage roommates who struggle with the morality of their feelings in the eyes of the Church.  Peter is a sensitive, artsy student who wants the couple to come out of the closet, while top student and valedictorian Jason wants to stay behind the shield of his Letterman jacket and sports jock persona.  In order to maintain the façade, Jason succumbs to the advances of Ivy, causing jealousy in Matt, who always plays second fiddle to Jason, both in school rankings and now in the quest for Ivy's affections.  Meanwhile, Jason's overweight sister Nadine hides her feelings of insecurity and rejection behind a tough, sarcastic demeanor, with most of her snide remarks directed at Ivy, who she perceives as the promiscuous beauty who has everything handed to her because of her looks.

It is heartbreaking to listen to some of the songs, as you can feel the angst and pain of the characters through both the melody and the lyrics.  Peter laments about how he feels when Jason wants to hide their feelings for each other–"The role of a lifetime, it’s living a fantasy...A war with such casualties, all played out behind a smiling face."¹ Nadia complains about the pretty girls getting everything while she is left behind, calling herself "Plain Jane fat ass; Hungry for love, she's a sensitive soul".¹  Ivy reveals her vulnerabilities in being judged just for her looks–"Portrait of a girl .. object of rumour .. sought after, trapped like a pearl". ¹ Hurt after being rejected by their respective objects of affection, Peter and Matt reach out to God, asking "Are you there? Do you watch me when I cry? And if it’s in your power, How can you sit idly by?"¹  And finally, tormented by guilt over his secret, Jason goes to Confession looking for absolution and is devastated by the Church's immoveable stance against homosexuality–"I've tried to be strong, I've tried to belong; But I don't, or I won't, I can't ... Am I Ok?"¹

One of the most effective songs called "See Me" revolves around a phone call where Peter tries to tell his mother that he is gay, while she continually cuts him off with trivial chitchat so as not to hear the truth–"Don’t hang up; this took such courage; I’m dying here, I’m all alone; I know you know what I’m saying; Just let me tell you"¹

Part of the plot involves the students auditioning and rehearsing for the school play, Romeo and Juliet.  In several songs, the lyrics are actually famous excerpts of that play, including the balcony scene, the pilgrims' hands speech when the lovers first meet, and the Queen Mab speech.  Setting Shakespeare's verses to music added an interesting dynamic to the musical and this play in particular highlighted the parallels between the doomed relationship of the two sets of star-crossed lovers.

One thought-provoking element of Bare was the contrast between the reactions of the students versus the Church (as personified by the confessional priest) after learning about Peter and Jason's relationship.  The students are surprisingly accepting and nonchalant about the revelation, while the Church is unyielding and unsympathetic, spouting doctrine about morality and sin.  In general, the kids in this school don't show much reverence towards the Church, as illustrated by the song Confession–"We're doing time in confession; It's a sacrament of oppression; We have no need for forgiveness; Because our shit's none of his business"¹  There might be some personal opinions of the composers being represented here.

Bare: A Pop Opera only ran for 6 weeks off-Broadway in 2004.  It has since been remounted multiple times across North America in both professional and semi-pro productions, including a recent version by University of Toronto theatre troop Woodsworth Performing Arts Collective (Wolfpac), which we had the pleasure of watching.

The group of talented young actors gave good singing and acting performances, but they were betrayed by substandard sound system and miking equipment.  The volume of their voices faded in and out and it was difficult to hear the ones with the weaker voices that could not project through the theatre.  On several occasions, the volume on the mikes was turned up too much, resulting in grating feedback noise.  The stand-outs in the cast were the actresses who played Ivy and Nadia. They were by far the best singers and actors, and we had no problems hearing them speak or sing.  Execution of the choreography needed a bit of work, as there were a few times when members of the chorus missed their marks and bumped into each other while moving around the stage.  Given that we watched the first show of the run, hopefully they were able to work out these issues.

All in all, I enjoyed watching this show since I loved the songs and story and appreciated the staging and choreography.  I would really like to watch a professional mounting of Bare: A Pop Opera some time, where the performers would have proper technical support.  In 2012, the show was revamped  as a book musical (with more speaking parts and less dialogue through song) and
renamed Bare: The Musical.  The story was updated to reflect more current societal views towards the LGBT population and bullying.  I would love to have the chance to watch this version as well.