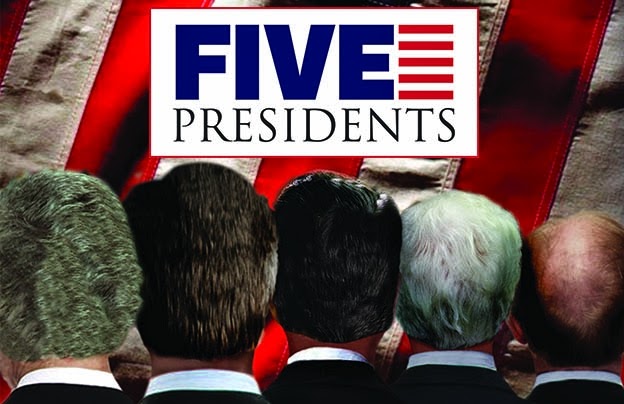 We love live theatre so much that we always look for opportunities to watch a play or musical while we are traveling.  Recently on a quick trip to Phoenix, Arizona to escape the cold, we were lucky enough to catch a performance of the play Five Presidents.  Created by Rick Cleveland, whose writing credits include the politically-based television hits "The West Wing" and "House of Cards", Five Presidents imagines what might have been discussed at the real-life event of Richard Nixon's 1994 funeral, which the five surviving past and present Presidents of the United States congregated to attend.

The play takes place in a conference room where Gerald Ford, Jimmy Carter, Ronald Reagan, George H. Bush and Bill Clinton arrive one by one (in chronological order of presidency) to await the start of the funeral.  A secret service agent announces the approach of each president, possibly to clarify for the audience which one he is.  The perfect casting makes this unnecessary since the stature, makeup, accent and manner of speech of each actor helps him to fully embody his respective role.  From Bush's large oversized glasses to Carter's relatively diminutive height and tale-tell grin to lanky Reagan's jar of jelly beans, each man was easily identifiable.

The five engage in pleasantries and light banter, while occasionally allowing past grudges and differences to arise.  Carter still resents Reagan's tactics in delaying the release of the Iran hostages until after Reagan's election and is annoyed with Clinton for not choosing him for an important diplomatic mission.  Bush simmers over losing his second term election to Clinton and blames Ross Perot for splitting the Republican vote.  Ford thought the offer to be Reagan's Vice President was a step back after already being President in his own right.  Each President is called out for making questionable military decisions that led to the deaths of American soldiers or civilians, and each is remorsefully able to quote exactly how many people died under his watch.

Despite their disagreements, they all realize that they are part of a very unique and exclusive "President's Club" who need to support each other.  Only those who have held their position can understand the stresses that they endured.  They are all annoyed at Nixon, since his downfall has changed the political landscape for the presidents that followed him.  The reverence once held for the presidency has diminished and public scrutiny has increased.  But none of them can say that they don't have their own political demons to face.

This mutual support is especially highlighted by the protective nature with which each of the other presidents try to guard the dignity of Ronald Reagan, who is suffering from the early stages of dementia.  Despite his occasionally confused ramblings, they treat him with a respect and tenderness that was sweet to watch.  The presidents also bonded over their shared experiences of having survived assassination attempts.  Ford described with incredulity that he was actually trying to shake the hand of his assassin when he was shot.  Reagan said that he didn't even realize that he had been shot.

The main dramatic impetus of Five Presidents revolves around Gerald Ford's refusal to deliver the eulogy for Richard Nixon, despite being listed on the program to do so.  Still stinging from the public outrage at his pardoning of Nixon, Ford did not want his eulogy to be interpreted as condoning the disgraced ex-president once again.  Each of the other presidents try to talk Ford into reconsidering and delivering the eulogy, except for Reagan, who offers to make the speech himself.  The others try to talk him out of it without revealing their fear that he will embarrass himself in his diminished capacities.

There are moments of humour in the play, as well as some foreshadowing of future events that have come to pass.  Clinton discusses a time when he and Hilary stopped at a gas station and came across her old boyfriend.  He said "You could have been married to a gas station attendant", to which she replied "No, I would have been married to the President of the United States", implying that she was the power behind the man–any man!  There were also thinly veiled allusions to the Monica Lewinsky affair in Clinton's future. George H. Bush threw in a few jabs at his own son, George W.  Gerald Ford spent most of the play trying not to drink alcohol, quipping that it was difficult to be an alcoholic when your wife has a substance abuse treatment center named after her.  There was also mention of the fact that in 1968 (true story), Senator Robert Kennedy predicted that in 40 years, there would be a black President.  Prescient almost to the day, Barack Obama was inaugurated in January 2009.

One of the most poignant moments of the play was also based on fact.  Gerard Ford justified his pardoning of Richard Nixon by carrying around "a portion of the text of Burdick v. United States, a 1915 U.S. Supreme Court decision which stated that a pardon indicated a presumption of guilt, and that acceptance of a pardon was tantamount to a confession of that guilt."  He felt that instead of a lengthy trial, the pardon was a faster way to end the national tragedy of Watergate and start the healing process for the country.

The amount of historical information conveyed throughout this play is astounding and is testament to the intensive research performed by Rick Cleveland in writing it.  Cleveland has created a humorous yet touching account of what might have taken place at such a momentous event, injecting dialogue that is entertaining and yet so totally plausible that it is difficult to discern which details he made up and which ones were based on fact.

Although being Canadian and only having cursory previous knowledge about these five men, I still thoroughly enjoyed this play.  So I could only imagine how much greater appreciation Americans would have for it.  At one point, after a rousing speech by the Reagan character, a voice behind us whispered, "You tell them, Gipper!"
Posted by A.R. English at 10:31 PM