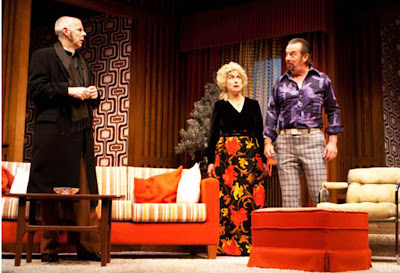 * Photo by Cylla von Tiedemann
Jitters is the latest Soulpepper remounting of the 3-act comedy written in 1977 by late Canadian playwright David French.  It is inspired by his own nervous experiences early on in his career when his plays were performed at the Tarragon Theatre.  Using the "play within a play" structure, Jitters follows a theatre group as it deals with an escalating slew of issues during the rehearsals and preview performances of a small Canadian production of the fictional play "The Care and Treatment of Roses".

The director George attempts to keep some semblance of decorum while soothing and finessing his temperamental cast which includes: Jessica, an aging diva on the downswing of her career and looking for a much needed hit, Patrick, a mature actor too afraid to explore opportunities outside of the Canadian theatre scene where he is known and respected, Phil, a finickity, insecure elderly actor who cannot remember his lines, and Tom, an up-and-coming young actor.  Also in the mix is the nervous, morose playwright Robert who is highly protective of keeping the written integrity of his second play intact, and Nick, the overly-controlling stage manager who is only heard as a voice in the first act.  Rounding out the cast are two female assistants, Peggy and Susi who don't seem to add too much to the plot, other than being the object of desire from various male characters.   The character of Tom also was not as well developed as the main protagonists in this play and could have been assigned a few more funny plot points. 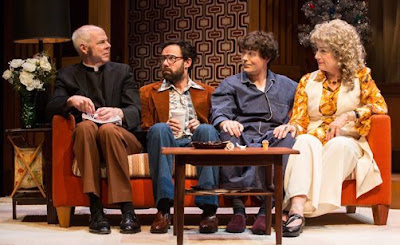 The first act of Jitters starts with an onstage dress rehearsal of "The Care and Treatment of Roses".  We are forewarned of the troubles to follow when the play begins in darkness, the lights come on for a few seconds to reveal an empty set, and then the lights go off again and the audience sits nervously in the dark again for a few more seconds.  When the lights finally come on again the second time, the cast is now on stage in midst of rehearsing a scene.  It is immediately clear from the decor of the furnishings and wall paper, as well as the wardrobe of both the actors and the characters they portray (including bell-bottom pants, bright colours, wide collars and wild patterns), that Jitters is rooted firmly in the 70s.  It felt like we were watching an episode of the TV sitcom "That 70s Show".

The interactions between Jessica and Patrick quickly establishes the animosity between them, which acts as an ongoing source of conflict throughout the play.  Sensibilities might have been different back in the 70s, but when it is revealed that in order to annoy Jessica, Patrick has been phoning her at 3am, then phoning her neighbour after she took her phone off the hook, and finally sending a pizza delivery, it felt more like stalking than pranking and I found it more creepy than funny.

The main humour from this first act stems from Phil's incessant complaints about his character's wardrobe (pants too tight, shoes squeak, toupee looks like a dead rat), as well as his inability to remember his lines or cues, which in theatre terms is called "to dry".  His lapses and the other cast members' futile attempts to cover up through ad-libbing become more and more hilarious each time they run through the same scene.  There is also the repeated gag of director George trying to encourage his actors by asking playwright Robert to compliment them, which Robert awkwardly avoids doing by taking slow sips of his coffee.

The second act literally rotates the set to reveal the actors' shared dressing room  that is reminiscent of the one at the Tarragon Theatre.  It is less than an hour before the start of one of the preview shows, where the troupe hope that the famous theatre critic Feldmen will be in the audience to review their performances.  Panic sets in as curtain time approaches but both Phil and Tom are missing. A flustered Phil finally arrives sporting a black eye and a tale of woe but there is still the issue of the missing Tom.  Robert is coerced into replacing Tom and much of the humour of the second act stems from his reluctance to do so.  More and more disasters pile up until the second act closes in a state of mayhem.

The third act reveals the cast back on the original set on the day after the preview performance.  They are reading a review from a critic from the Toronto Star, which had positive comments for everyone except Jessica.  After amping up the comedy and frantic action in the first two acts, the third act felt rather flat, a bit anti-climatic and not very funny by comparison.  In fact, overall, Jitters was not as funny as I thought it would be and definitely not as funny as a very similar British play that was performed around the same time–Noises Off by Michael Frayn, which we watched at Stratford in 2004.  The structures of the two plays are remarkably similar with each one's first act representing a dress rehearsal of a play and second act depicting backstage antics before or during the play. 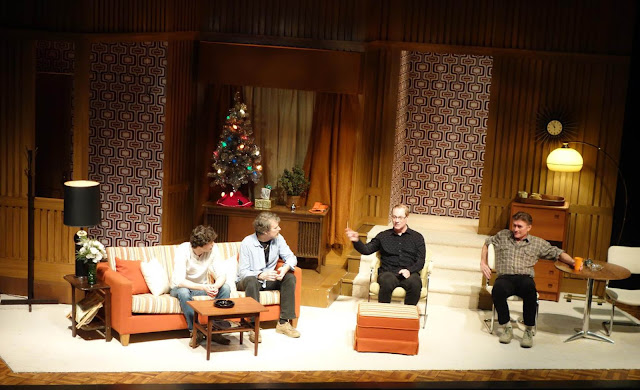 Noises Off fully embraced the concept of farce, with the typical opening and closing of doors, mistaken identities, scantily clad ingenues, romantic couplings and full-on slapstick that required pinpoint timing and induced non-stop roars of laughter.  While Jitters has a few elements of slapstick and some very funny moments, it is not structured as a farce. Instead, it is a delightful play that insightfully portrays what it is like to put on a show in a small Canadian theatre.  As such, its humour only inspired tepid chuckles throughout the play.  One of the funniest interactions in Noises Off involved the frantic interactions backstage during a performance, with the rest of the cast trying to keep their alcoholic cast mate from consuming a bottle of liquor.  Jitters also has an alcoholic plot point but it was almost played more for pathos than for laughs.  It was interesting to hear during the Q&A session after the show that Jitters was almost picked up for a run on Broadway, but it was upstaged by Noises Off, which was selected instead.

I always like when the staging of a play incorporates the entire theatre and Jitters does this well, taking full advantage of the layout of the Baillie Theatre.  In the opening act, the director George emerges on the balcony level (where we were sitting), calling down directions to his actors.  This seems to be the stereotypical setup repeated in most "show within a show" plays and movies, including All That Jazz and A Chorus Line.  Throughout the three acts, the actors enter and exit the scenes, sometimes walking right off the stage and down the aisles.  In one scene where Susi is prompting Phil's lines, she sits right in the audience.  The use of the entire theatre is especially effective for this type of play, since it further blurs the lines between the play Jitter and the inner play "The Care and Treatment of Roses" and allows the audience to feel like we are part of the action.
Posted by A.R. English at 4:59 PM