AGO - Chagall and the Russian Avante Garde 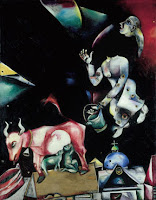 Prior to seeing the exhibit of Chagall and the Russian Avant-garde at the AGO, I always thought Chagall was a Surrealist like Salvador Dali.  Chagall's paintings of floating people (or sometimes just their disembodied heads) and animals had a dream-like quality that led to my confusion.  What I learned from the audio guide and literature of this exhibit was that Chagall's main motivation for his art was to convey the culture and folklore of his Russian Jewish roots. 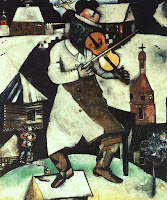 Prominent in the Jewish heritage is the image of the fiddler which inhabits many of Chagall's paintings.  One such painting was bought by Norman Jewison and became the inspiration for his movie Fiddler on the Roof.  The fiddler playing a violin is an important part of many significant Jewish rites including births, marriages and funerals.

The images of people floating in the air, especially the iconic beggar man in the painting "Over Vitebsk", represented the plight of the wandering, homeless Jewish outcasts, who were persecuted and oppressed in Russia and drifted around like refugees.  It was of particular interest to compare two versions of "Over Vitebsk" that Chagall painted (1914 and 1915), with the second rendition displaying Cubism influences.  The church and the snow were depicted with more angular lines in the second painting and the beggar man's face is now obscured. 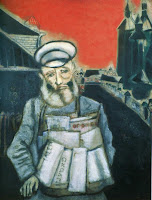 The Newspaper Seller (1914) reflected Chagall's interpretation of the sobering effects of World War I.  The morose looking vendor seems laden with the burden of the distributing the bad news of more deaths to the people of the town.  This painting hung in the Chagall home and his small daughter always wondered why the man looked so sad and worried that it was her fault. 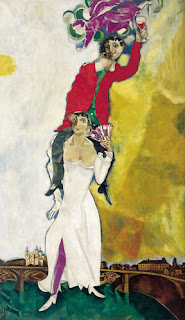 In contrast, Chagall's happiest painting "Double Portrait with Wine Glass" was created in honour of his marriage to his beloved wife Bella and the birth of their daughter Ida (referenced by the image of a purple angel depicted above his head).  In this painting, Chagall and Bella are both smiling and she has him hoisted on her shoulders - symbolizing her role as his muse and support structure.  I wondered why his head seems slightly detached from his head and why he is covering her right eye but this was not discussed in the audio guide or write-ups.

For me, the most interesting Chagall piece in the exhibit was "The Revolution" which depicts a political scene within a circus motif.  The painting shows angry revolutionaries to the left waving guns and red flags while to the right are the artists, musicians, lovers and wanderers from the pre-war era.  In the centre is a rabbi holding a torah scroll, seated at a table looking rather perplexed while Lenin is balancing on one hand on top of the table.  The imperial Russian flag is trapped between Lenin's legs while the post revolution red flag with the sickle lies on the ground to his right.   Lenin's acrobatic pose indicates how he has turned Russia on its head and divided the factions of the old and new world.

On the side of the artists where Chagall sees himself, he has incorporated a retrospective of his previous iconic images including the wandering beggar man, the fiddler, the bride and groom and various animals (seated donkey, lambs).  Chagall has foreshadowed his exile from Russia in this painting since he is not able to fit into the side of the Revolutionists.

Although Chagall was the main attraction of this exhibit, it also featured other artists of the time who took part in the Russian Avant-garde movement including other painters, sculptors, and photographers.  This movement was the artistic expression of the general desire for change in culture, society and arts in reaction to the horrors of World War I.  Gone were the days of neoclassical representations of religious themes and portraits of the Russian aristocracy.  In its place, new styles of modernist art depicted the common man, played with stark dramatic graphics and experimented with abstraction ranging from Cubism to Rayonism to Constructivism.

Spouses Mikhail Larinov & Natalia Goncharova were leaders in the Constructivism movement - art as a practice for social purposes and a political tool for providing message of equality and freedom to the working masses.  Mikhail invented Rayonism which "uses dynamic rays of contrasting color, representing lines of reflected light".  He liked to write words and symbols on his paintings and carried this into his day to day activities.  Mikhail and Natalia used to paint inflammatory words & phrases on their faces and walk around town to provoke reactions.   Natalia portrayed images of hearty hard-working peasants in bright vibrant colours while her evocative painting of a peacock demonstrated her flair for abstract art.

Once again, the AGO has presented an interesting exhibit that expands our understanding of different art styles from different cultures and time periods.
Posted by A.R. English at 9:52 PM