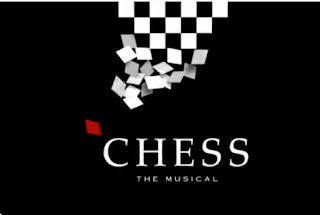 Long before Mamma Mia became a hit, the songwriters of the Swedish group ABBA first dabbled in musical theatre with Chess (lyrics by Tim Rice), inspired by the cold war East vs West rivalry between Russian Boris Spassky and American Bobby Fischer.  Initially performed in 1986, the complex plot line and lyrics have undergone multiple revisions.   I first saw this musical in the late 80s at a Denver Colorado dinner theatre and fell in love with the songs.   The most recent version was staged at the Princess of Wales as part of the 2011 Mirvish theatre subscription series. 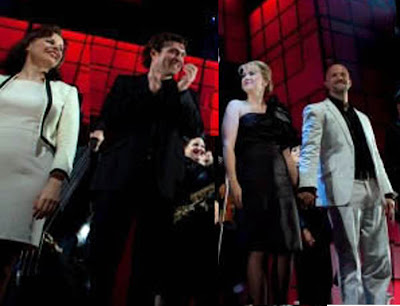 In this latest production, Chess opens at the World Chess Championships in Merano Italy with the reigning champion, arrogant American Freddy Trumper playing against Russian challenger Anatoly Sergievsky.   A love quandrangle is formed when Anatoly falls in love with Freddy's coach and former lover Florence, and decides to defect to England to be with her, leaving behind his wife Svetlana and children in Russia.  The game of chess is used as a not too subtle metaphor for the political intrigue and maneuvering that ensues as the Russians try to get Anatoly back and the Americans have their own agenda.  They play on his guilt at "having left his wife to face the music alone", and offer to free Florence's Hungarian father who they claim is not dead as she thought but actually being held as a political prisoner.

The set, costumes and choreography made for visually stunning if somewhat overwrought staging as the chorus were dressed as black or white chess pieces, and also doubled as the on-stage musicians.  It was impressive to watch the chess pieces sing, play horn and string instruments and perform complicated dance moves (sometimes flat on their backs) all at the same time.

Some of the chess pieces, and in particular the arbitrator of the match were dressed in tight leather with bare chests exposed, giving them a "Village People meet S&M" feel. The arbitrator's look was distracting with his long black coat that seemed stolen from Keanu Reeves' Matrix character.  He should have looked distinguished and authoritative but ended up looking smarmy and sleazy.  In addition the choreography for some of the earlier songs introducing the chess pieces and the chess scene were overtly and extraneously sexual.  This diluted the impact for the one song where the sexuality actually fit and was necessary for the story - the hit song One Night in Bangkok about  the decadence and prostitution scene in Bangkok Thailand.

The floor of the set is configured like a chess board to further push the analogy of the players as human chess pieces in the game of propaganda and politics.  As each set of adversaries or lovers interact, the chess squares light up to accentuate the drama and excitement of the encounter.  By contrast, the actual chess match itself was choreographed in a deathly slow manner.  Each opponent stared at the board forever before making the simplest move including the standard opening gambit.  Perhaps this was meant to ratchet up the tension and importance of the match but it just seemed silly.  I wanted to shout out "make a move already .. you call yourself a chess master?!?!"

There are some great songs in Chess including soaring ballads like Anthem ("My land's only borders lie around my heart"), heartbreakers such as I Know Him So Well ("In the end he needs a little bit more than me, more security ..") and Pity the Child ("Pity the child, but not forever, not if he stays that way..." ), and catchy beat-pounding tunes like One Night in Bangkok ("... makes a hard man humble, Not much between despair and ecstasy") and The Arbiter ("I am the arbiter and I know the score ... From square one I'll be watching all 64").


However Tim Rice overreaches, especially in the new songs added to the latest production.  It's one thing to write sophisticated lyrics that are sung quickly (ala Stephen Sondheim). But when these words convey important complicated plot points, with many people singing different lyrics at the same time, and to top it off, some songs are sung with heavy Russian accents and use complex chess terminology .. well, it's going to get confusing!   In the song "Soviet Machine", there are the lyrics "Not the score, the witless core of commentators are debating; Come admit, who gives a shit for Elo rating".  These words are so ironic since how many people even know what Elo rating means (a method for calculating the relative skill levels of players in chess - I had to google).  Even the pages of written synopsis in the program don't help much when you can't hear what is being sung.

I still love the musical Chess but I wish they would stop tinkering with the plot since it doesn't seem to help.  In the various versions that have been staged,  they've changed the ending of the big chess rematch (sometimes the Russian wins, sometimes the American wins, in this production the Russian turned British plays another Russian!)  In every case, Anatoly makes the big sacrifice to leave Florence and return to Russia so that she can have her father back.  However they cut out an important piece of dialogue between Florence and the American CIA agent that would have clarified the story.  The result is a piecemeal ending that goes from one huge ballad to another without any fluidity.  I much preferred the plot from the first time I watched this.
Posted by A.R. English at 10:43 PM