Christmas Carol Reading at Church of the Redeemer 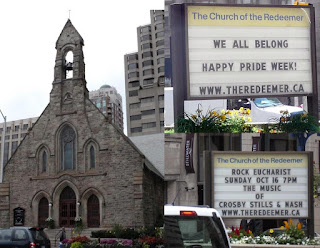 The Church of the Redeemer at the corner of Bloor St and Avenue Road seems hipper than your average religious establishment.   From its inclusive and welcoming sign during Pride Week to advertisements for Rock Eucharists like the one featuring tunes of "Crosby Stills and Nash", this church seems to offer something for everyone.

Each year although they may not be officially on the program, they usually seem to have something set up for Nuit Blanche, and many times the exhibit is more interesting than the officially sanctioned ones. 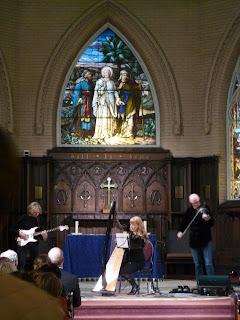 Each personality read one part of the short story, playing all the roles in their section.  While they were all used to public speaking and projected clearly and loudly, it was evident which ones were the actors.  Sean, Marilyn and Cedric added inflections, accents and emotions to bring their characters to life while Bob and Loreena merely read the words (although being a singer, Loreena had the most beautiful dulcet reading voice I'd ever heard).  In between each reader, Christmas music was played including two glorious songs sung by McKennitt while she played the harp. 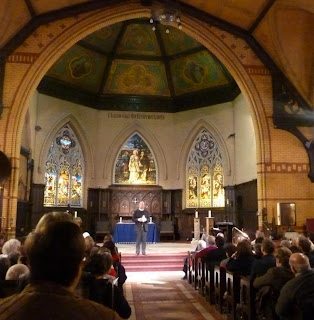 The reading was a charity event to raise money to support the church's lunch program  which serves hot breakfast and lunch to the poor every week day.   The reverend Andrew Asbil provided the introduction and closing remarks for the proceedings.  He told an amusing anecdote as a preamble to explain how important the lunch program was to the community.  He was an excellent speaker and listening to his voice was mesmerizing which I guess is an important trait for his field.

Since Rich loves it so much, I have been exposed to numerous renditions of "A Christmas Carol" including the Alistair Sim black and white movie, and watching the play put on by the theatre group Soulpepper.  But this is the first time I've heard the actual text of this classic tale read aloud.  It was an interesting experience.
Posted by A.R. English at 11:49 PM