Ride the Cyclone, an original musical by Atomic Vaudeville, a theater troop from Victoria B.C., has been described as the "anti-Glee" since it does not have a happy-ever-after plot line and cheery, peppy songs.  Instead it is a wickedly funny dark comedy that deals with somber themes bordering on the morbid.  A better description might be that it is the retelling of "Forever Plaid" for a pessimistically cynical, post 9/11 era.  It played at the intimate Passe Muraille Theatre in the funky part of Queen St West to rave reviews and sold out audiences.

Six teenaged members of the St.Cassius choir from Uranium, Saskatchewan are tragically killed in a roller coaster accident at a local carnival.  Karnak, the carnival's mystical fortune telling puppet, can foresee death (including his own upcoming termination caused by a giant rat that is gnawing at his power cord).  He anticipated the children's demise but regretfully was unable to warn them after being set to "family fun mode" since death predictions were considered to be too gloomy.  As recompense, he gives them a chance to return for a final performance.  Each member has a turn in the spotlight, delivering a brief monologue and song that describes his shortened life and conveys his lost hopes and dreams.  They express regrets about all the things they never got to do - grow up, lose their virginity, get good jobs, leave the shrinking ghost town of Uranium.

As the only gay kid in Uranium, Noel Gruber wanted to escape his boring life.  He longed for a more passionate, dramatic existence full of angst and suffering like characters he found in books and movies.  He fantasizes that he is an opium addicted prostitute in post World War II France and makes the transformation on stage by donning a black wig, lingerie, fishnet stockings and heels.   Thus dressed in drag with cigarette dangling from his fingers, the bluesy cabaret torch number he performs is hilarious.

Ocean O'Connor Rosenberg is the bossy overachiever who struggled to please both her Irish Catholic mother and Jewish father by becoming a champion debater.  Her gospel song "Play to Win" describes the dirty depths she would sink to in order to be the best at all costs (You want to kick out the crutches from a cripple? ... As long as you are winning, who cares!)  In a turning point of the song, the spirit of Karl Marx advises her that "When you're knocking on Heaven's door, it's only your soul alone that's keeping score". 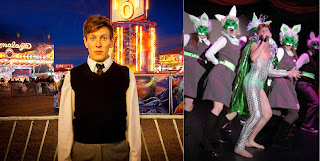 Ricky Potts is the shy, geeky nerd who lives with his grandparents and a slew of cats.  No one listens or pays much attention to him until he transforms into his alter-ego, the sleek, confident, inter-galactical ladies man who is the heroic leader of a planet of cat people.  Dressed like Ziggy Stardust, his song techno rock song "Space-age Bachelor Man" is inspired by David Bowie's "Cat People".  His previously whiny voice deepens as he growls "The fate of a galaxy before you ..Millions of lives in your hand .. I'm a swinging, space-aged bachelor man .. let's dance kitties"

Misha Bachinsky is an angry confused Ukranian immigrant who was sent to Canada for a better life and then rejected by his adoptive family.  He wishes to return to the Ukraine to be with his Internet girlfriend Natalia.  His conflicting emotions of rage and love are expressed through his equally incongruous dancing styles of gangster rap hip hop and ballet.  Natalia is shown as a video projected image and at one point, it actually seems like she is dancing beside him.

One of the children who died in the accident was decapitated and therefore unidentifiable.  She is dubbed Jane Doe and  takes over a doll's head as her own,  while carrying around the doll's headless body.  Because of this, her eyes are creepily cold, flat and pitch black and there are golden ringlets in her hair.  Her haunting soprano aria laments not knowing her name or who she belongs to ("No one around to mourn or cry ... Just like a song nobody knows ... A forgotten name, some lost refrain.. Forever eternally Jane Doe").  The others are afraid of her but try to comfort her by throwing a birthday party (signifying her rebirth) to give her a sense of identity. 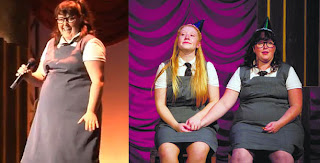 Finally Constance Blackwood is the chubby, likeable, happy-go-lucky girl with glasses who is constantly condescended to and overshadowed by Ocean.  She is embarrassed of being the only one who is "content to live and die in Uranium" and wants to take risks and for her life to have meaning.  In her monologue she reveals that she did accomplish something significant before she died and in her song she sings "There's nothing wrong with being the nicest girl in town - All that is clear, now that I'm here on my sugar cloud". 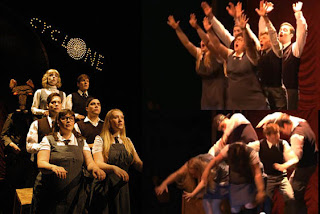 We found this musical to be fresh and exciting with great songs and back stories that fully flesh out each character in a very short amount of time so that you really care for them all by the end.

In the past few years, we've realized that often we enjoy the smaller plays and musicals more than the big professional productions offered by Mirvish and Dancap.  I hope this play returns for a longer run as I would really like to see it again.  Or at least put out a CD so that I can add the music to my collection.
Posted by A.R. English at 4:50 PM